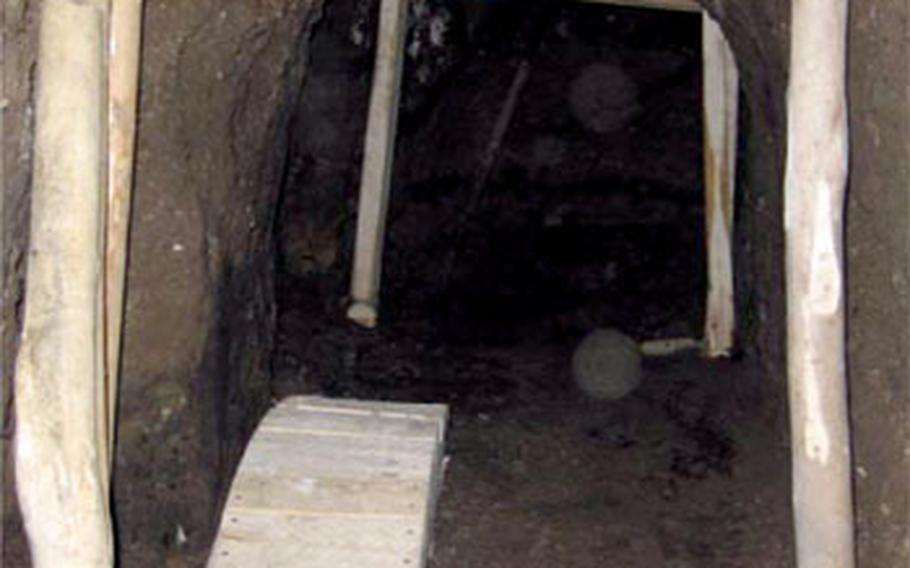 According to officials, U.S. soldiers, acting on a report of a planned bomb attack against Mosul Provincial Hall by way of a tunnel system, found the tunnel and arrested two in what the U.S. commander in northern Iraq called an “evil deed.” (Courtesy of U.S. Army)

American troops have foiled an apparent plot to tunnel under the Mosul provincial hall and destroy the building with explosives, officials said Tuesday.

According to U.S. military officials in northern Iraq, at least two alleged al-Qaida in Iraq members were detained Monday in connection with the plot.

The two men were detained "during a patrol that led to a search of a bakery" near the provincial hall, according to a news release.

"Soldiers were acting on a report regarding a planned bomb attack against Provincial Hall by way of a tunnel system," the release read.

Mosul has been described by U.S. commanders as the last urban stronghold for the Sunni insurgent group. U.S. and Iraqi forces have gradually increased pressure in the city over recent months, largely by following a plan similar to that used in Baghdad &#8212; building smaller combat outposts in urban areas where troops largely had no presence before.

In Tuesday&#8217;s release, the U.S. commander in northern Iraq said of the alleged tunnel plot, "This kind of evil deed attempted by al-Qaida and their affiliates in the Islamic State of Iraq shows how evil this organization is."

"To be planning this kind of activity during the holy month of Ramadan, against a government building where innocent Iraqis work, shows that these organizations care nothing for the good people of Iraq," Maj. Gen. Mark P. Hertling, commander of Multi-National Division &#8211; North and the 1st Armored Division, was quoted as saying in the release.

Pictures attached to the release show a wide dirt tunnel supported by wooden beams; other photos show a tunnel entrance apparently chipped through a concrete floor, along with digging equipment, a compass and other tools.