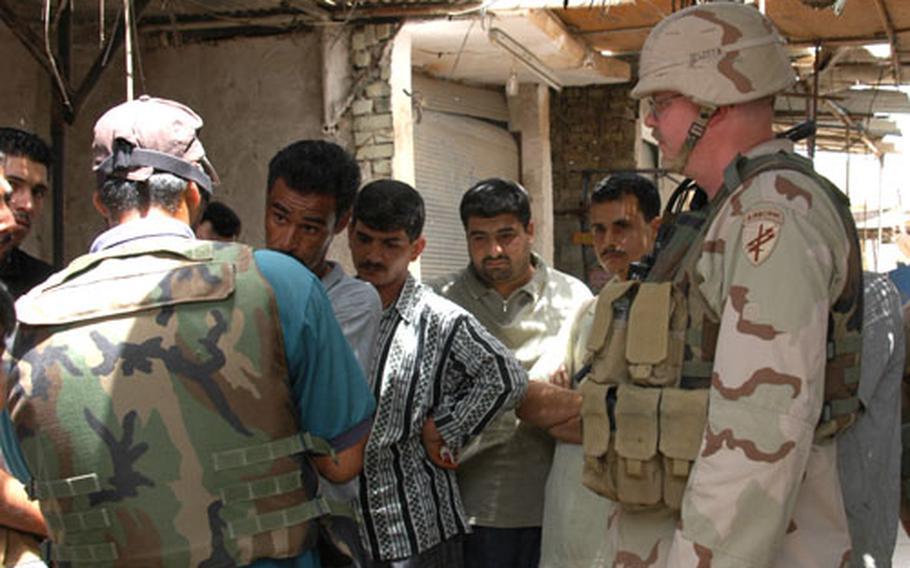 Hussein Ali discusses the need for jobs and electricity with a translator who goes only by Salam, (back to the camera) and Maj. Craig Lester of the 489th Civil Affairs Battalion at a market in south Baghdad. (Nancy Montgomery / S&S)

Hussein Ali discusses the need for jobs and electricity with a translator who goes only by Salam, (back to the camera) and Maj. Craig Lester of the 489th Civil Affairs Battalion at a market in south Baghdad. (Nancy Montgomery / S&S) 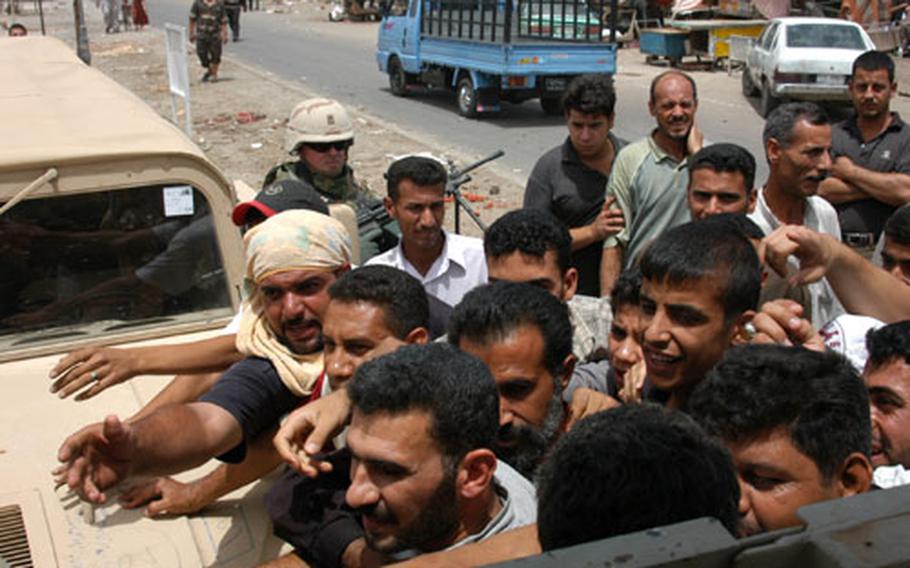 Iraqis in south Baghdad making a grab for free T-shirts from the 489th Civil Affairs Battalion. Maj. Tony Carroll said Iraqis had reacted similarly to most things the soldiers have handed out, including fliers describing the soldiers&#39; gear. (Nancy Montgomery / S&S)

BAGHDAD &#8212; The first thing Hussein Ali asked Maj. Craig Lester was why the 6-foot-4-inch Tennessean was standing in his neighborhood market.

Lester said no. His two-Humvee convoy, from the 489th Civil Affairs Battalion, was there to view the market, he said, take measurements for a new project nearby, and hand out some T-shirts.

In a garbage-strewn, south Baghdad neighborhood called Abu Deshir, after two weeks of news reports about terrible prisoner abuse and humiliation at Abu Ghraib prison by U.S. forces, it seemed that what remained foremost on the minds of some of the neediest Iraqis had not changed.

Lester, 38, along with other soldiers from the 489th Civil Affairs Battalion attached to the 1st Battalion, 8th Cavalry Regiment, 1st Cavalry Division in Baghdad, has been working in the neighborhood since his arrival from Knoxville, Tenn., in February. The soldiers have put in street lights and soccer fields, built protective walls around gas stations, improved roadways and renovated schools &#8212; 27 projects in all and a tiny drop in the bucket addressing Baghdad&#8217;s need.

They&#8217;ve also tried to persuade the people there that the United States is in their country to help them, no matter what they&#8217;ve heard.

But they couldn&#8217;t dispel the rumors about Abu Ghraib.

The disclosures of abuse, it was predicted, would make their jobs and those of other U.S. troops in Iraq more dangerous. So far, most soldiers say, they don&#8217;t feel any more at risk.

Some commanders encouraged their soldiers, when on patrol among Iraqis, to address the Abu Ghraib issue and reiterate the Army&#8217;s message: Those photos do not represent the actions of most U.S. soldiers; America is ashamed and sorry that such abuses occurred; and the soldiers who committed the abuses will be punished.

The scandal and ensuing congressional hearings uncovered Pentagon-approved, coercive interrogation techniques, such as depriving prisoners of food, sleep and clothing and using dogs to intimidate them. Those methods were banned last week.

But many soldiers interviewed said they had not brought up the Abu Ghraib scandal in any discussions, and Iraqis had not broached the subject, either.

A translator who works with the 489th Battalion, who gives his name only as Salam and wears a disguise for fear of being murdered for working with the U.S. military, said it&#8217;s hard sometimes to know what Iraqis really think.

After years of living in fear of Saddam Hussein, he said, they don&#8217;t necessarily say what they mean, especially to those in authority.

Salam said he thought Abu Ghraib was just the latest in a list of problems that had long ago caused Iraqis to lose confidence in the U.S. mission. Without much progress restoring electricity and security, people had already come to view many American promises as empty, he said. Searches and raids ending in the detainment of thousands of Iraqi men had earned the United States real enmity long before the Abu Ghraib photographs of sexual humiliation came to light, Salam said.

A school headmaster did bring up Abu Ghraib during a visit by civil affairs Spc. Aaron Spalding to discuss school renovations, Spalding said.

Spalding replied that he was there to help, that he and the Army valued loyalty, respect, selfless service and integrity, and that the soldiers who committed the abuses were therefore not really soldiers.

Among the most important measurement soldiers say they use to gauge the amount of good or ill will around them &#8212; in addition to roadside bombs and people firing weapons &#8212; is the behavior of Iraqi children. If they&#8217;re out on the street, it&#8217;s a good sign that no ambush is near. If their parents allow them to approach the soldiers, all the better.

During Lester&#8217;s market mission, scores of children gathered around, begging for T-shirts that read &#8220;Peace and Prosperity.&#8221;

The T-shirt giveaway had started earlier, then been hastily curtailed when it threatened to turn into a riot. A throng of Iraqi men pushed children out of the way and pressed Lester against his Humvee to grab for the shirts until he had to rifle-butt them with his M-16 and drive off.

Now the men were gone but the children, almost all boys about 10, had taken their place.

Lester laughed, and one boy asked him if he was from Texas.

Many interactions among soldiers and Iraqi adults remain friendly. At the beginning of a recent project that employed some 600 Iraqi men to clean canals of silt, plants and garbage, Maj. Luther Webster was addressed by one man.