U.S. troops fighting against the cycle of revenge in Adhamiyah 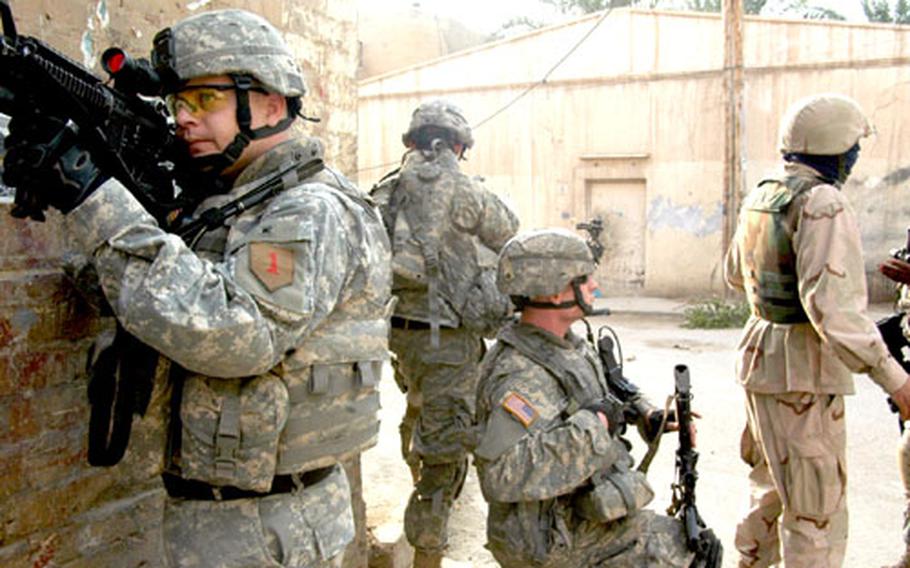 Soldiers hold fragments of the mortar shell that struck a secondary school last week in Adhamiyah, a turbulent Sunni neighborhood in northeast Baghdad. A 14-year-old girl was killed and other children were wounded. (Ben Murray / S&S) 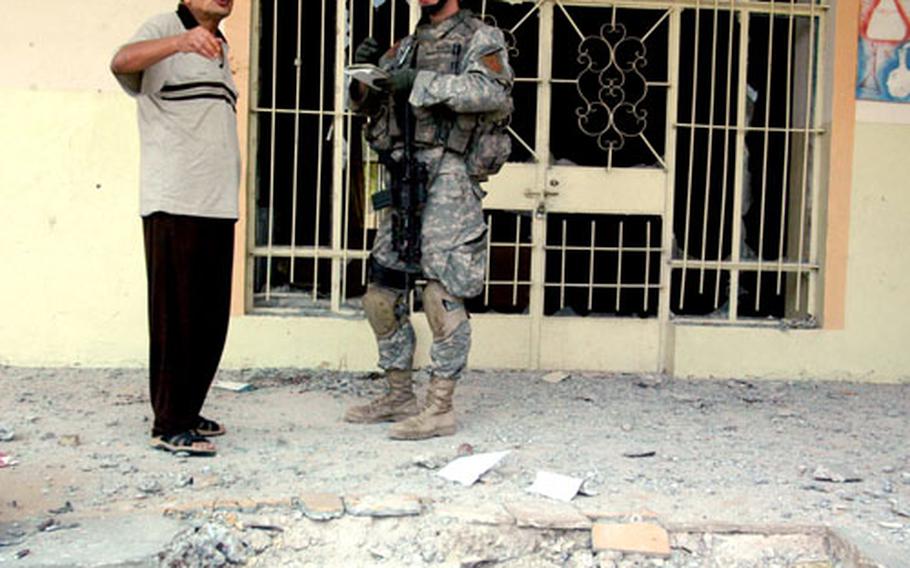 First Lt. Matthew Waite, 25, from Alexandria, Va., and a local resident stand near the spot where a mortar round struck a school yard last week in Adhamiyah. (Ben Murray / S&S) 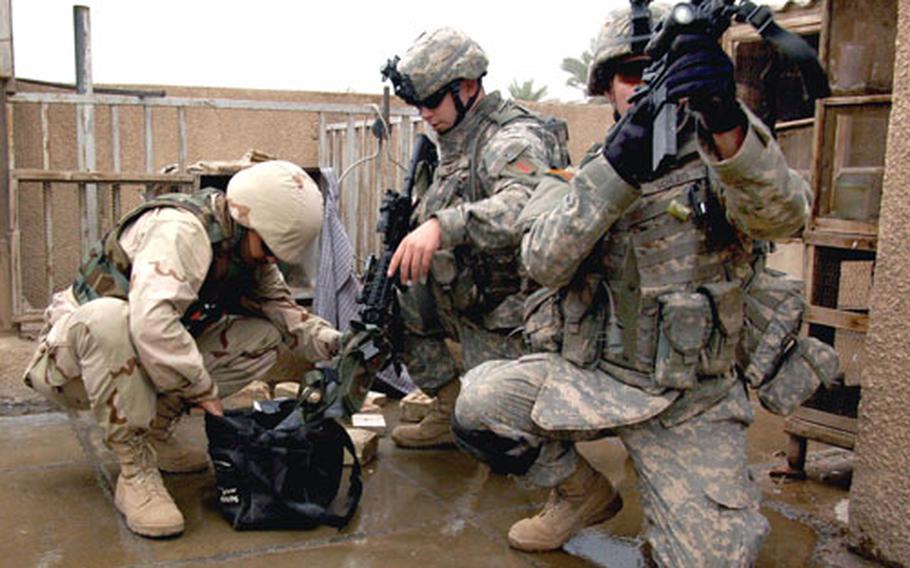 U.S. soldiers from Company C, 1st Battalion, 26th Infantry Regiment, 1st Infantry Division and an interpreter go through a bag found in a ventilation shaft on an apartment building roof in Adhamiyah after getting a tip. The bag contained clips of AK-47 ammunition, a small find in city infested with weapons, but it was enough to detain two men for further questioning. (Ben Murray / S&S) 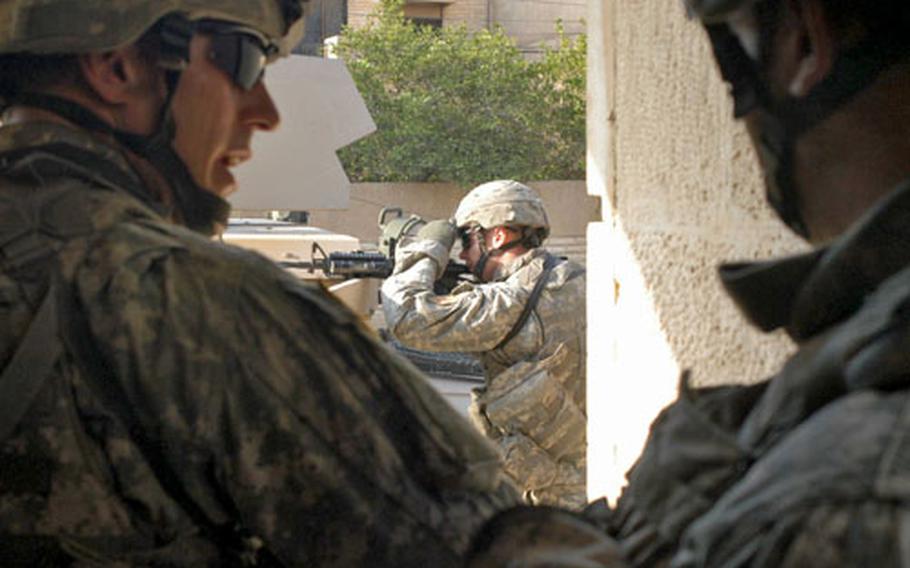 BAGHDAD &#8212; The man was hard to see at first because his clothes were the same color as the dust on the sidewalk.

He was probably not yet 20 when he was shot in the head and left on the side of the street in Adhamiyah, a violent neighborhood on a bend in the Tigris River in northeast Baghdad.

He lay awkwardly, one arm outstretched and the other tucked behind him, his legs drawn up near his stomach. Blood and flies were on his face.

A convoy of U.S. soldiers pulled to a stop next to him. They performed a short routine emblematic of the state of affairs in this boot-shaped Sunni enclave a few minutes&#8217; drive from Sadr City.

The troops contacted their headquarters and called in the position of the body, noting his apparent age and wounds. They then rolled away without further fanfare.

Soldiers in Adhamiyah don&#8217;t get out of their trucks or attempt to move a corpse because of the threat of a booby trap on the body or, more likely, a sniper waiting to ambush anyone who goes near it. Men have been shot trying to inspect bodies.

In Adhamiyah there is almost always a body on the street. Two days earlier, troops from Company C, 1st Battalion, 26th Infantry Regiment, 1st Infantry Division working out of Patrol Base Apache found a cluster of six executed men, all shot in the head or chest and left in plain view.

In the following days, soldiers found more, including one decapitated man, along the warren of avenues they have nicknamed for liquors. Absolut, Johnnie Walker, Bacardi. One favorite lane for executions is called simply &#8220;Murder Street.&#8221;

The bodies are a reminder of how far things still have to go in Adhamiyah before the U.S. military can claim victory in its struggle to quell violence in the city.

In August, the 170 or so soldiers of Company C were sent into Baghdad as part of a renewed effort to stem sectarian killings and restore order where murderous militias and religious factions roam freely.

Known as Operation Together Forward, it started with a house-by-house sweep of the area by the 172nd Stryker Brigade, which cordoned off Adhamiyah in a &#8220;clear, hold and build&#8221; strategy to push out insurgents and then patrol the area tightly while infrastructure is restored.

Two months into the operation, a senior U.S. military spokesman conceded that violence had risen in the operation&#8217;s areas because of counterattacks.

&#8220;We&#8217;re finding insurgent elements, the extremists, are pushing back hard,&#8221; Army Maj. Gen. William B. Caldwell was quoted as saying in a Washington Post report on an October briefing. They&#8217;re trying to get back into the areas, he said.

Today, weeks after the Strykers have moved on, Company C is trying to hold up the part of the plan that involves protecting local citizens and utility crews while water and electricity are restored to the neighborhood.

But it&#8217;s a tough fight against a fully developed cycle of revenge, where troops have few chances to stanch the killings, soldiers said.

One problem was the sweep through Adhamiyah either didn&#8217;t root out the right people or allowed them to flee, only to return when the 170 troops took over for 4,000 U.S. and Iraqi soldiers.

U.S. soldiers in Adhamiyah still face a constant threat from snipers and roadside bomb attacks. Troops scoff at the idea that the neighborhood was &#8220;cleared&#8221; or that they are just protecting a safe zone emptied of insurgents.

Six men from Company C have been killed since the unit arrived, and numerous others have been shot or wounded in grenade and roadside bomb attacks.

Local Iraqis say things have actually deteriorated since the operation began in August.

&#8220;The situation is getting worse. It will get worse,&#8221; said one Adhamiyah resident, a retired engineer who declined to give his name for fear of reprisals. No one in the community dares to go out after dark, he said, for fear of being kidnapped.

But often the cause is simple, mutual Shiite- Sunni hatred, locals said.

The dread of attracting the attention of insurgents is so complete that people won&#8217;t even help men who have survived execution attempts and lie wounded but alive in the street, said Capt. Michael Baka, commander of Company C.

Despite disheartened assessments and the appalling rate of killings, Baka said the U.S. presence in Adhamiyah is having a good impact on the neighborhood.

U.S. troops are constantly patrolling the streets, acting on tips and hauling in suspects in a town where only Iraqi army units prowled before.

The &#8220;build&#8221; phase has seen some successes, including garbage cleanups, the delivery of large numbers of generators and the start of a major sewer system overhaul.

Baka said 160 local, mostly Sunni, policemen have been recruited and a new army colonel has arrived who shows promise, according to Iraqi troops.

But there have been setbacks. Utility workers often are threatened and shot at, stalling some projects, and even some Iraqi police members admit that they are ineffective as a security force.

Still, the troops try to nab bad guys and help Iraqi security forces improve their efficiency. They&#8217;re working to convince the populace that the U.S. is here to help, then leave, Baka said.

In that vein, members of Company C&#8217;s scout platoon went to a local school Thursday to hand out toys and supplies to kids, only to find it closed. A school worker let them in to see why.

Two days earlier a mortar had fallen in the courtyard, killing a 14-year-old girl and wounding a number of others with shrapnel and splintered concrete. Bloody glass and clumps of hair still lay by the spot where the round struck.

The mortar attack, the worker said, was a reprisal for bombings earlier that day in Sadr City, and also hit a nearby kindergarten.

First Lt. Matthew Waite, from Virginia, and Sgt. Robin Johnson, a brawler from Boston with a soft spot for kids, looked at the wreckage and wondered aloud how people could do such a thing.

But with no other way of finding out who had, they continued on their mission.