U.S. troops bring relief to Afghans ... and their animals 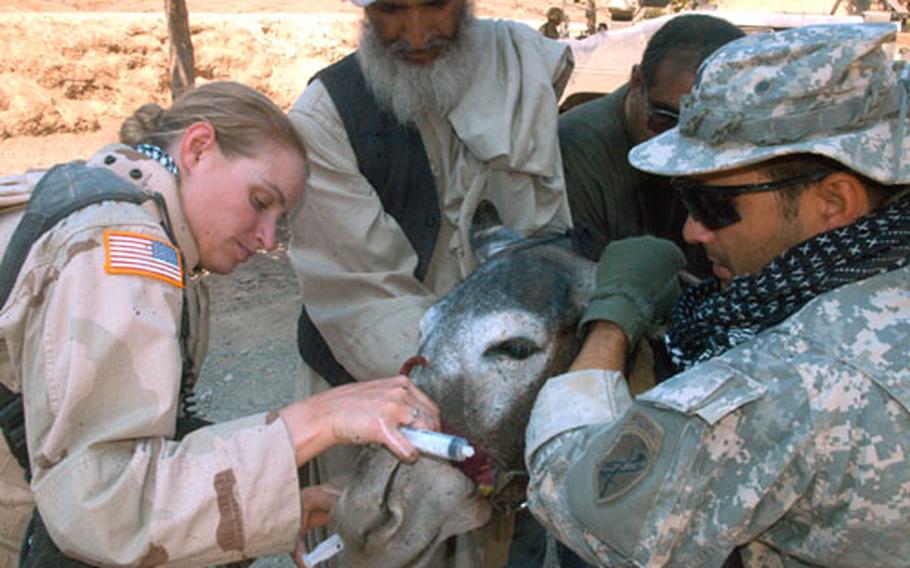 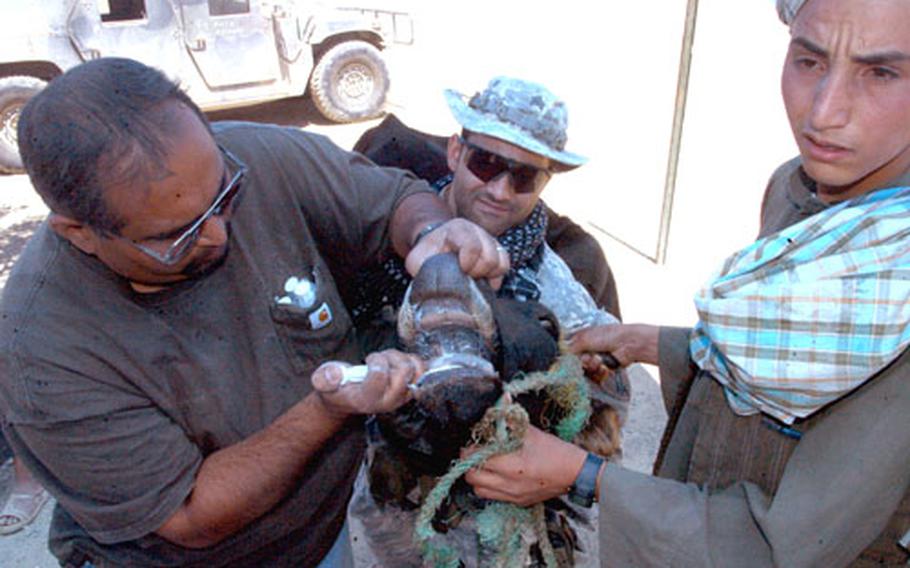 U.S. Department of Agriculture veterinarian Gerald Ranakissoon administers medicine to a cow during a veterinary visit to Baghran Valley in Afghanistan&#39;s Helmand province. Sgt. Shane ValVerde holds the cow to keep it from backing away as the Afghan boy who brought the animal to the makeshift clinic holds its reins. (Jason Chudy / S&S)

While politics, reconstruction and security dominated the formal meeting in the Baghran District headquarters, the other one, located under a large blue tarp at the edge of town, centered on animals, a key staple in the lives of the people in this isolated mountain valley nestled in the country&#8217;s southwestern Helmand province.

Both meetings, it could be said, are equally important to the residents of Baghran valley.

These meetings come only a few weeks after an announcement that the military and U.S. aid agencies will be providing about $2.4 million worth of reconstruction projects for Baghran Valley, a longtime Taliban stronghold, over the next six months.

Helmand&#8217;s ties to the Taliban are well known to military and civilian officials, and the coalition and Afghan government want to sever those ties.

The coalition press release announcing the aid package, for example, states that Baghran Valley was Taliban spiritual leader Mullah Omar&#8217;s home, although a number of military officials privately said they doubt the claim.

But there&#8217;s no doubt that provincial Gov. Rais Baghrani is a former Taliban leader who has since come to support the new government. He also was believed to have offered refuge to Omar shortly after Sept. 11, 2001.

Baghrani, who flew to the shura with military officials on Monday, also is running in parliamentary elections slated for Sept. 18, and will probably win, believes Capt. Allan Dollison, a team leader with the 492nd Civil Affairs Battalion from the Lashkar Gah Provincial Reconstruction Team.

&#8220;&#8216;Reconstruction is my new jihad,&#8217;&#8221; Baghrani was quoted as saying by Dollison and the coalition press release announcing the reconstruction aid.

U.S. and Afghan government officials hope that the incoming aid will continue to move disenchanted Taliban closer to the Kabul government. And increasing the government&#8217;s presence in Baghran, and the hundreds of other areas like it, is a key focus of coalition efforts in the area.

Breaking that traditional Taliban support and providing reconstruction projects will be a tough road to take, though, literally and figuratively.

The morning of the shura, a Taliban bomb exploded along a road the soldiers had taken into town the day before. There were no injuries among the few dozen soldiers from the various civil affairs, infantry and medical units in Baghran on Monday providing medical, dental and veterinary services to villagers and their animals.

Visits like these, Dollison said, are key to the war effort in Afghanistan.

Dollison ticked off the projects in the area, naming road and bridge construction projects, medical facilities and schools.

Key to the villagers, Dollison said, is the rebuilding of the town mosque. The original plans for the rebuilding had to be changed and more funds allocated because local officials thought it was too small.

Across the road, veterinarians Ranakissoon and Mueller worked on various farm animals.

&#8220;None of these animals have probably ever seen a veterinarian before,&#8221; said Ranakissoon, who serves as the USDA&#8217;s provincial reconstruction team regional adviser for most of southern Afghanistan.

Dollison said that medical, dental and veterinary teams are expected to make similar visits about once a month.

Soldiers from Company A, 3rd Battalion, 141st Infantry Regiment of the Texas Army National Guard&#8217;s 36th Infantry Division and the 92nd Military Police Brigade from Baumholder, Germany &#8212; with rifles in hand &#8212; watched the veterinarians at work.

Everyone also understands that it will be a long time before unescorted aid workers can visit places such as Baghran Valley. Dollison said that they have had a hard time contracting projects in the area because of the Taliban presence.