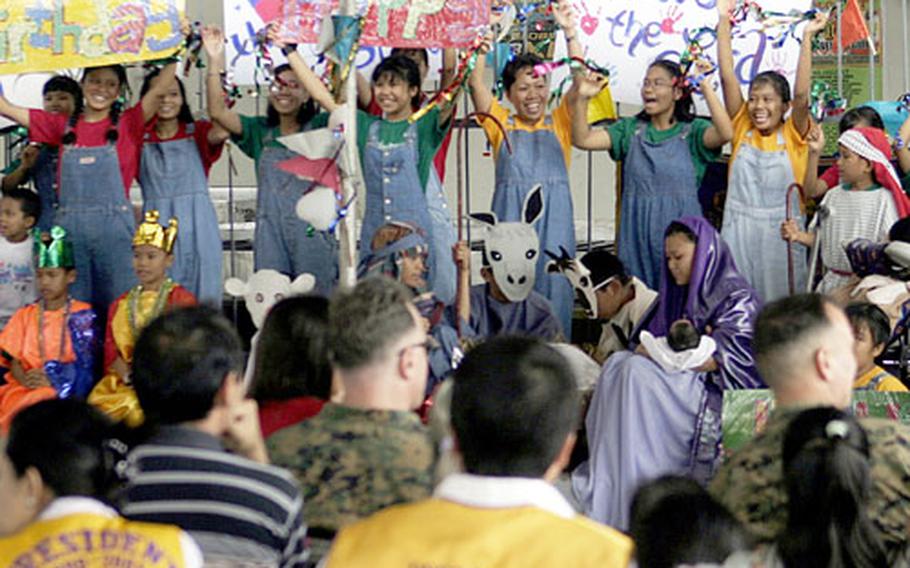 U.S. Marine Corps Children from Calvary Chapel Bacolod Orphanage perform a Christmas play in Bacolod, Philippines, on Dec. 28 for Marines and sailors from Okinawa, Japan. The orphanage was among 14 nonprofit organizations in the Philippines that received Christmas gifts and clothes from servicemembers from III Marine Expeditionary Force Headquarters Group and their families on Okinawa. (Warren Peace / Courtesy of U.S. Marine Corps)

Okinawa-based Marines and sailors flew to the Philippines on Wednesday to spread a little Christmas cheer by dropping off 18,000 pounds of donated gifts and clothing.

Fifteen servicemembers handed over the donations to representatives of 14 nonprofit organizations at stops in Bacolod and Manila, according to a Marine news release. The items were donated by more than 3,000 servicemembers and their families through the III Marine Expeditionary Force Headquarters Group&#8217;s &#8220;Giving Tree Program&#8221; and Toys for Tots, according to Navy Cmdr. Manuel Biadog, III MHG chaplain.

&#8220;The chaplains on Okinawa found out there was a need for this and put it all together,&#8221; Col. Mark M. Kauzlarich, commanding officer for III MHG and Camp Hansen, was quoted as saying in the release.

The servicemembers arrived in Bacolod aboard a KC-130 &#8220;Hercules&#8221; piloted by a crew from Marine Aerial Refueler Transport Squadron 152, which is based at Marine Corps Air Station Futenma. After they unloaded more than half the goods from the plane, residents of the Calvary Chapel Bacolod Orphanage performed a Christmas play for them.

The troops &#8220;came from Okinawa to bless us with these gifts,&#8221; CC Bacolod Pastor Joe Rosmarino, founder of the orphanage and a retired Marine gunnery sergeant, was quoted as saying in the release. &#8220;We want to bless [the servicemembers] with a [Christmas] program we put together and give them some gifts.&#8221;

After the program, the Marines and sailors boarded the plane and made one more stop in Manila to deliver the rest of their cargo. After a short stay there, they returned to Okinawa.

Petty Officer 3rd Class Nicholas Anderson, a religious program specialist with III MHG, was quoted in the release as saying: &#8220;I left knowing people less fortunate than myself were able to receive more than they imagined.&#8221;