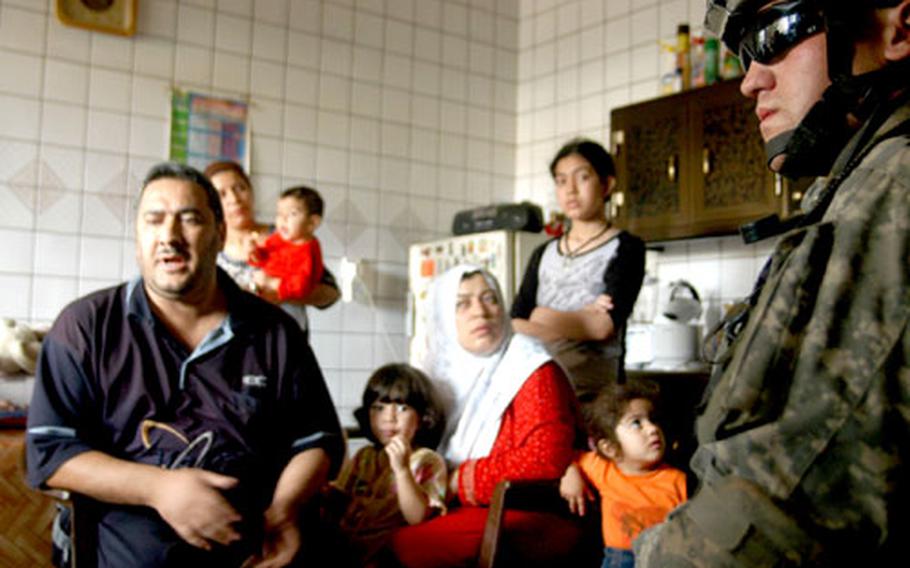 Sgt. Matthew Campbell, 23, from Seattle, listens to a Baghdad resident talk about his concerns in the Tunis neighborhood Sunday, where members of Company B, 1st Battalion, 26th Infantry Regiment were on patrol while the Hussein verdict was being read. (Ben Murray / S&S)

CAMP RUSTAMIYAH, Iraq &#8212; Troops in Baghdad said Sunday Saddam Hussein had a stiff punishment coming and predicted his conviction and sentence &#8212; death by hanging &#8212; would cause violence in the streets of the capital.

&#8220;He gets what he deserves, I guess,&#8221; said Sgt. Matthew Campbell, 23, from the mortar platoon of Company B, 1st Battalion, 26th Infantry Regiment at Camp Rustamiyah, Baghdad.

He said a lot of people soldiers talked to were happy Hussein was out of power.

Hussein was convicted midday Sunday for his role in the killing of 148 Shiite Muslims in the northern Iraqi village of Dujail following an attempt on his life there in 1982.

By the afternoon, companies in the battalion had seen little other than celebratory shooting into the air, said Capt. Jared Purcell, spokesman for the battalion, based at at Camp Rustamiyah, Baghdad.

Company C from the 1-26th engaged in a firefight Sunday morning in the Ahdamiyah neighborhood in which six insurgents were reported killed, but the engagement was unrelated to trial reactions, Purcell said.

But while celebrations seemed the order of the day in Baghdad, troops said they expected the conviction to cause trouble in an already violent city.

Widespread violence in the capital was anticipated by U.S. and Iraqi officials, who instituted a citywide vehicle and pedestrian curfew starting the night before the scheduled hearing.

To prepare for sectarian bloodshed or riots, military officials disseminated reams of intelligence to lower commanders on numerous potential scenarios for both a guilty and not guilty verdict, based on former pivotal events such as last year&#8217;s elections.

The briefings outlined a range of possible reactions, from celebrations, &#8220;all the way up to attacks against government buildings on the grand scale,&#8221; said Purcell.

As added preparation, some units also took increased security measures, such as adding tanks and Bradleys to their normal patrol lineups, he said, but otherwise units went about their business on the empty streets.

Some soldiers had thought the case could go either way because Hussein was being tried in his former seat of power, or expected he would get a light sentence because of his stature.

At least one soldier said the death penalty fit the crime.

Chapman&#8217;s unit is in the process of redeploying back to the U.S. Although outfall from the verdict hasn&#8217;t played havoc with that schedule yet, the Binghamton, N.Y., native wasn&#8217;t ruling it out.