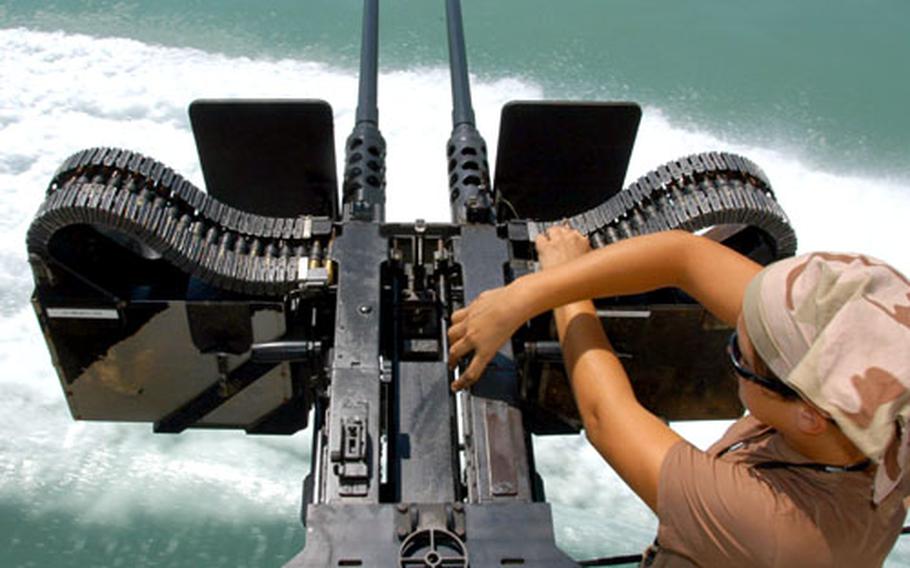 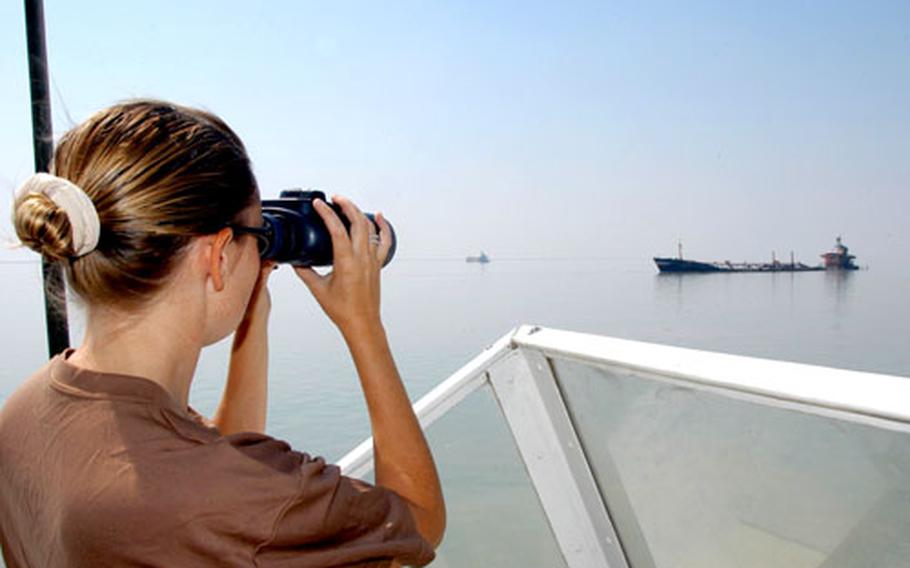 ABOARD THE USS PHILIPPINE SEA &#8212; Whether it&#8217;s aiding a shrimper who&#8217;s been robbed by pirates or figuring out why an Iranian vessel set fire to a skiff, U.S. and coalition sailors have plenty to do off the coast of Iraq.

Iraqi fishermen sell their shrimp to Kuwaitis in speedboats who whisk away the shrimp to ice, Lockwood said. Then pirates rob the Iraqis of their profits.

Three of the attacks were in the middle of the night, and the pirates stole shrimp money, Global Positioning System equipment, a marine radio and a camera, Lockwood said.

Often, Iraqis prey on other Iraqis, he said.

Coalition forces have detained pirates and transferred them to Iraqi custody when evidence of a crime has been found. If no evidence is found &#8212; sometimes pirates toss their treasure overboard &#8212; then a coalition ship will escort the suspects out of Iraqi territorial waters, Lockwood said.

Dealing with the oil smuggling in the region has been more of a challenge, Lockwood said. The oil pipelines in southern Iraq aren&#8217;t well-protected, and oil gets siphoned and put on fishing dhows to be sold on the black market.

&#8220;We&#8217;d like to get the Iraqi law enforcement agencies to work on this, but the insurgency is such in Iraq that many are concerned if they take on these big, organized oil smuggling rings, there will be retribution,&#8221; he said.

Still, sailors with the coalition believe they&#8217;re making progress in other ways.

The coalition gets calls for help from vessels throughout the 5th Fleet area of responsibility.

A few months ago, the coalition came to the aid of a sailing yacht off the coast of Yemen, the crew of which feared it was about to be attacked by pirates, according to Navy Rear Adm. John W. Miller, deputy commander of U.S. Naval Forces Central Command and 5th Fleet.

The coalition will help anyone, Miller said, including the Iranians.

&#8220;Bumping into&#8221; the Iranians can&#8217;t be helped in the northern Persian Gulf, where the lines between Iraqi and Iranian territorial water are blurred, officials said.

No maritime border has been agreed upon by the two countries, Lockwood said. A crane that sank in the mouth of the Shatt al Arab River between Iran and Iraq is said to be partially in Iraqi water and partially in Iran&#8217;s water, said Royal Australian Navy Lt. Cmdr. Tish Van Stralen, CTF 158 legal officer.

&#8220;We&#8217;re operating about as far north as you can go,&#8221; said Reiter, the USS Sirocco sailor, pointing to a black line that represents what the coalition considers to be the edge of the Iraq-Iran maritime border.

On a recent October day, Petty Officer 3rd Class Brandon Smith, an information technician on the USS Sirocco, wondered whether an Iranian vessel that set fire to a skiff during his watch was trying to &#8220;mess&#8221; with the U.S. sailors.

Whatever the intent, Lockwood said dealings with the Iranians are more of a distraction than a concern: &#8220;They don&#8217;t deliberately try to provoke us.&#8221;

Miller said there&#8217;s no way for the fleet commander to talk to his counterpart in Iran.