U.S. troops back up Iraqi army in volatile areas 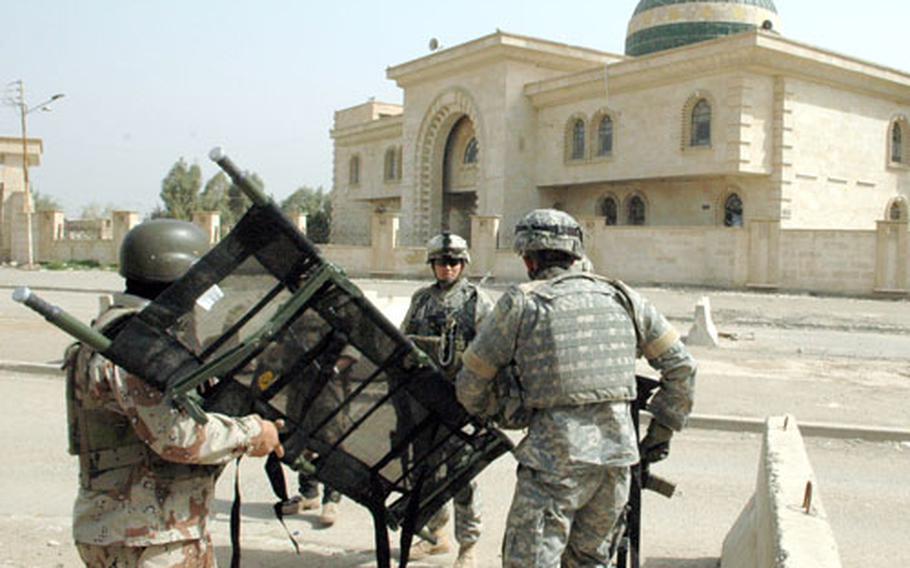 U.S. and Iraqi troops ready a stretcher to transport an Iraqi soldier who was wounded in a drive-by shooting in Baghdad last week. (Andrew Tilghman / S&S) BAGHDAD &#8212; The affluent homes, dusty German sedans and routine crackle of gunfire in the Kadra neighborhood of eastern Baghdad is a familiar setting for Capt. Mike Fortenberry. His company patrolled these mostly Sunni side streets for several months last year until the area was handed over with ceremony and fanfare to an Iraqi army battalion. Fortenberry and his troops moved in January to a new sector further east of the capital.

But Fortenberry&#8217;s soldiers returned here just days after the Feb. 22 bombing of a Shiite shrine in Samarra. Their new mission is similar to their previous one: to back up the newly independent Iraqi army unit here and keep the calm between Iraq&#8217;s two rival religious sects.

There is one key difference. The U.S. soldiers who used to directly control the area now work in ostensibly independent Iraqi army battle space and are instructed to have at least a few Iraqi army soldiers with them whenever they patrol.

The realignment of U.S. troops here is part of a citywide plan to stem the violence. More than 1,000 bodies have been found in recent weeks, many bound, gagged and executed in what soldiers say is a mix of sectarian killings and criminal attacks.

The decision to return U.S. troops to newly minted Iraqi army battle space is designed to both support daily security operations as well as to influence public perception.

&#8220;I think we&#8217;re just maintaining what we and the IA and the ISF have accomplished. All we are doing is showing them that we are not cutting and running on these guys,&#8221; Cassibry said.

At the same time, the shift of troops underscores the increasingly complex relationship between the Iraqi army and the U.S. soldiers as more territory falls under Iraqi control.

For months, the roughly 400 soldiers from the 1st Squadron, 71st Regiment of the 10th Mountain Division served as a large-scale military transition team by providing daily support for an Iraqi army brigade. Those soldiers have recently expanded their role and resumed independent security patrols since the Feb. 22 mosque bombing.

The U.S. commanders say they are seeing a change in the nature of the threat they face, a shift away from the bilateral battle of insurgents versus U.S. and Iraqi soldiers.

&#8220;The lead edge of [the insurgency] is to destabilize the political process; to move away from a democratic process and move back to the way it&#8217;s been before, a more dictatorial style,&#8221; Meadows said.

With the rise in attacks on civilians, the U.S. soldiers are frequently acting in a role more typically associated with local police and emergency response services.

One recent day Fortenberry began his day on patrol by responding to a scene of a drive-by shooting where an Iraqi army soldier was shot in the hand. U.S. soldiers helped bandage the Iraqi soldier&#8217;s wound and arrange for transportation to a hospital in the Green Zone.

Later, the U.S troops responded to another drive-by shooting on a main highway where three Kurdish private security workers were wounded while transporting supplies for the Marines.

Fortenberry&#8217;s soldiers were then called to a small construction supply office that was covered in blood, with no apparent victims in sight. U.S. soldiers asked several nearby residents for information, but learned little. The U.S. solders reported the apparent killings to the Iraqi police.

Many Iraqi residents appeared to welcome the renewed presence of U.S. troops in their neighborhood.

&#8220;You must protect us,&#8221; an 48-year-old engineer and retired Iraqi army colonel named Monkath Abdul Razak told Fortenberry as U.S. and Iraqi soldiers searched his house during a routine patrol.

&#8220;There are people coming all the time. They put on a mask and they yell at us all the time to get inside. They are shooting everything. When you show up, they disappear.&#8221;

Fortenberry listened as the man waved his hands and became increasingly emotional. He offered him a cell phone number to call and report further problems.