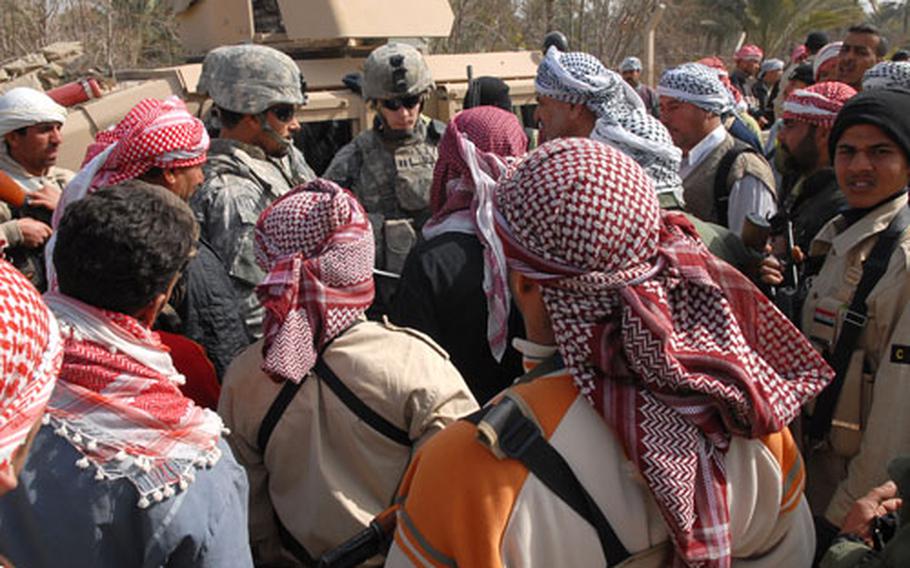 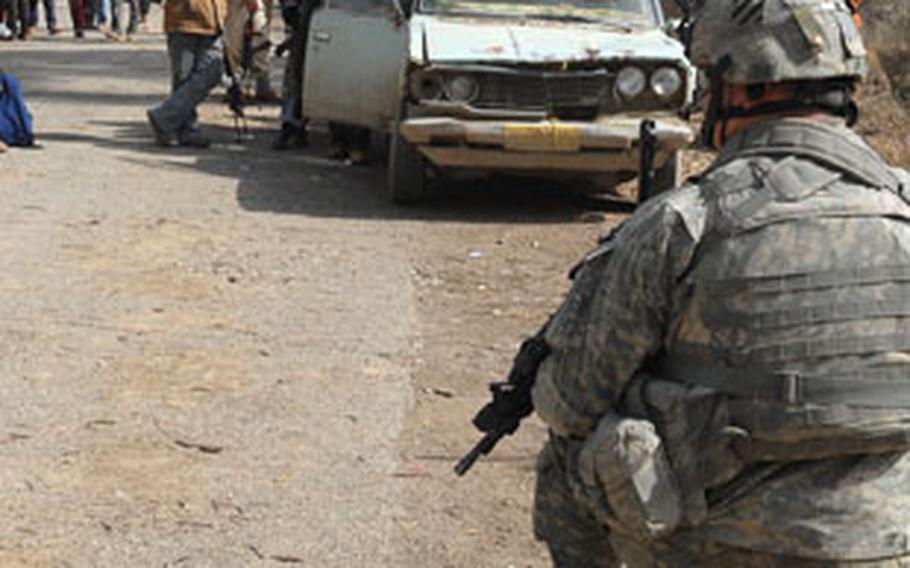 About 150 prospective members of “Sons of Iraq” showed up to participate in clearing operations south of Salman Pak. (Michael Gisick / S&S) 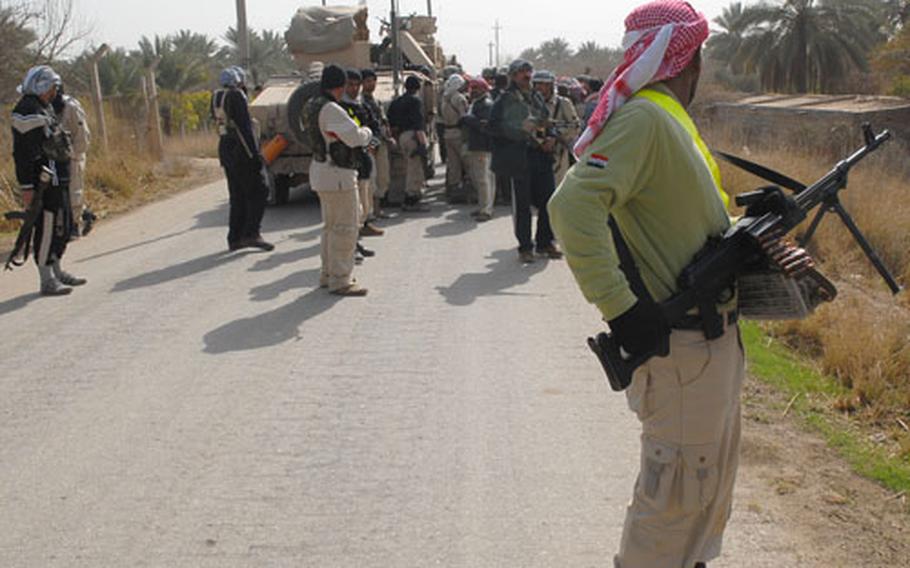 U.S. commanders say they do not arm the men who participate in the "Sons of Iraq" programs, and they prefer to keep a studied from the question of where the guns come from. "Every Iraqi male is authorized to have one weapon," is the standard response. (Michael Gisick / S&S)

SALMAN PAK, Iraq &#8212; As about 150 men hung around in the road with their Kalashnikovs, the rival factions of the tribe&#8217;s would-be leadership made their cases against each other before the American commander.

&#8220;These men who are standing right here, their sons were all involved in al-Qaida,&#8221; said Sheik Ahmed Midjwal, indicating the four elders standing a few feet away, who had moments earlier described Midjwal and his brother as &#8220;the same thing as al-Qaida.&#8221;

Saturday had started well enough for the U.S. troops from the Army&#8217;s 1st Battalion, 15th Infantry Regiment. They had set out to clear one of the main roads south from Salman Pak into a peninsula in the Tigris, a longtime al-Qaida stronghold and, before that, a combination Baath Party resort and Republican Guard training ground.

Response to a call for local men to help clear the area and later man the checkpoints that would be set up along the road had been good. But now this tribal dispute threatened to ruin the day. The sheik who had recruited the armed men recommended calling the whole thing off.

The scene along the road south of Salman Pak, with an ancient archway in the background and Arab pop music pouring from a dilapidated bongo truck, seemed to represent both the potential and the potential pitfalls of the so-called &#8220;Sons of Iraq,&#8221; the U.S.-funded, sheik-administered program of security checkpoints that has become a central part of the American strategy in Iraq.

In an example of what can go wrong, an anti-al-Qaida group that was working with the U.S. south of Baghdad said Saturday it would temporarily halt patrols and stop manning checkpoints in protest of a U.S. airstrike that it said killed three of its members.

The awakening council said Friday that an American helicopter strafed one of its checkpoints, killing the members in the village of Jurf al-Sakr. U.S. officials say the strike is under investigation.

That incident didn&#8217;t appear to have dulled enthusiasm for the program in Salman Pak, however. Even before they began their push into the peninsula on Friday, U.S. commanders say they&#8217;d had such success setting up nascent &#8220;Sons of Iraq&#8221; groups that much of the work had been done for them.

But the obvious fear that the groups could be infiltrated by al-Qaida or other militant groups is not the only one that worries U.S. commanders. Approved sheiks are paid a monthly sum based on how many security checkpoints they&#8217;re authorized to set up, which they in turn use to pay the people they select to man the checkpoints.

Typically paying $1,200 per checkpoint, the security contracts have become, in some cases, a lucrative source of competition between tribal leaders. And in turn, the worst fear of American commanders is that the &#8220;Sons of Iraq&#8221; will become U.S.-funded muscle used to settle old tribal scores or carry forward renewed sectarian strife.

After a few rounds of mutual recrimination, Marr and Capt. William Clark, the commander of the battalion&#8217;s Company A, managed to broker a temporary detente between the tribal elders. Midjwal would stand down for the day and go back to his village a few kilometers north. In exchange, one of the men from the rival faction would go home too, and tribal leaders would gather with the Americans soon to sort out their differences and elect a leader.

And with that, the men lounging along the road sprang to action, parading forward in red and black headscarves and every sort of uniform, most carrying AK-type automatic rifles but some holding old bolt-action rifles, one lugging a machine gun, and many wearing their pants tucked into their socks.

It was a scene &#8212; the rag-tag force of Iraqis considerably outnumbering the Americans in an area where U.S. and Iraqi police outposts had been attacked virtually every day until mid-January &#8212; that would have been as implausible in Iraq a year ago as an ice sculpture festival. But there it was.