U.S. tries new approach to keep Iraqis away from convoys 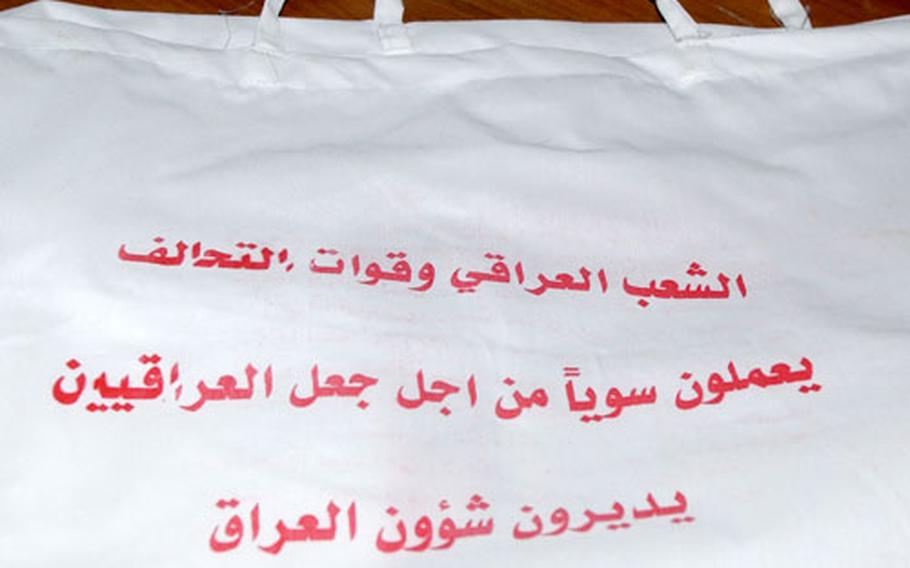 Three thousands bags will be distributed around Camp Anaconda bearing an Arabic message urging civilians to stay away from convoys. The other side, shown here, says: “The Iraqi people and the coalition force working together to let Iraqis run Iraq.” (Jeff Schogol / S&S)

CAMP ANACONDA, IRAQ &#8212; Next week, Iraqis around Camp Anaconda are expected to start receiving 3,000 white bags with a message intended to cut down on civilians killed by getting too close to U.S. convoys, said Lt. Col. Albert Zakaib, of 3rd Corps Support Command.

One side of the bag has a message written in red Arabic lettering warning the &#8220;kind citizens of Iraq&#8221; to stay 200 meters behind U.S. and coalition convoys.

&#8220;If this safe distance is not maintained, these forces may use sound audible warnings, flash vehicle lights, shoot flares, fire warning shots or use deadly force if necessary,&#8221; the message says.

On the other side of the bag is another message in Arabic: &#8220;The Iraqi people and the coalition force working together to let Iraqis run Iraq.&#8221;

Since only about 30 percent of the roughly 30,000 Iraqis in the region can read, the hope is that those Iraqis who can read will tell others to keep a safe distance from convoys, said Zakaib, who is heading up the effort.

Zakaib said the bag mission was inspired by an effort in western Iraq in which Marines printed similar instructions on water bottles.

Since the area around Camp Anaconda is mostly made up of farming communities, it was decided to put the message on the bags in this case in the hope that women in the Iraqi villages will use the bags when buying produce at the market, he said.

&#8220;That was done deliberately by the psychological operations folks. We wanted to not only give kind of a stern warning on one side &#8212; but on the other side, just to let them know that we&#8217;re not only here to be brute with them if you will, but we&#8217;re also here to help them. Help them help themselves,&#8221; he said.

Zakaib said there have been instances of Iraqis getting shot or hit by vehicles after coming too close to U.S. convoys around Camp Anaconda, but he did not have any statistics on how many Iraqis have been killed.

&#8220;Sometimes kids will just come up to a convoy just because they know that soldiers will throw candy at them or stuff like that so they sometimes get too close and all of a sudden one might trip and then &#8212; boom &#8212; knock his head on the side of the vehicle, so that&#8217;s another reason why we want them to keep their distances,&#8221; he said.

During an eight-week period this spring, the Multi-National Corps-Iraq officials counted more than 600 &#8220;escalation of force&#8221; incidents in the country stemming from civilians who unwittingly drove too close to convoys or checkpoints. These included cases in which no shots were fired but Iraqi drivers were perceived as a threat and lower escalation of force measures were taken.

Of the 600 incidents, there were more than 30 deaths and more than 60 injuries.

Zakaib said aside from the bags bearing messages, there are other ongoing efforts to let Iraqis know that U.S. troops want to help them.

Another example is Operation Iraqi Children, a joint effort between a nonprofit group and the Defense Department to give school supplies to Iraqi children, said Maj. Patrick Howard, of 3rd Corps Support Command.

Howard said the hope is to build relationships with local Iraqis. The effort gives the school supplies as a reward for Iraqis who cooperate with the coalition, such as by turning out to vote, he said.

&#8220;I think the idea of the program is that we need to affect the hearts and minds of the children because they are the future of Iraq,&#8221; he said.