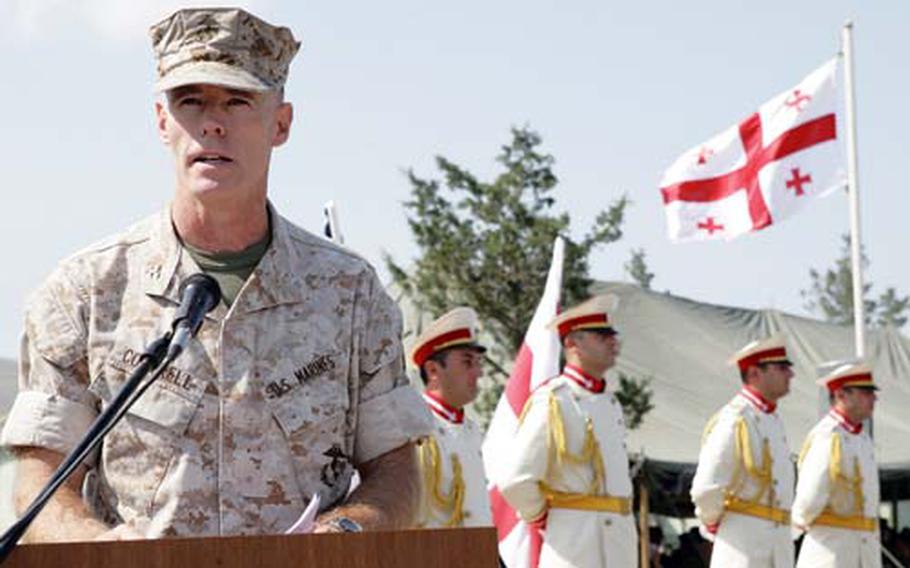 STUTTGART, Germany &#8212; With support for the war in Afghanistan waning at home and abroad, a group of Marines are in the Republic of Georgia training the Georgians for an upcoming deployment.

Four Georgian light-infantry battalions will be trained in six-month intervals during the two-year training alliance, which was previously focused on preparing the Georgians for deployments to Iraq. Georgia&#8217;s involvement in Iraq ended last year following its own war with Russia. One year later, the eastern European nation is getting ready to get back in the fight.

However, not many other nations appear as eager to increase their involvement in the nearly 8-year-old war that left 47 U.S. troops dead in August &#8212; the deadliest month since the fall of the Taliban regime in 2001.

A new Pew Research Center survey of 25 nations reveals that President Barack Obama&#8217;s decision to send more troops to Afghanistan is the one policy area where the otherwise popular U.S. leader faces significant opposition. Among the 10 NATO members polled, Germany led the way with 63 percent opposed to sending more troops. More than one-half of those polled in France, Poland, Canada and Britain held similar views.

Nonetheless, under the eye of U.S. Marines from Stuttgart, the Georgians began preparations this week for a spring deployment to volatile Helmand province in southern Afghanistan in support of International Security Assistance Force operations.

"The training program will focus on skill sets necessary for Georgian Forces to operate alongside NATO and ISAF partners in a counter insurgency environment in Afghanistan," said Marine Master Sgt. Grady Fontana, a U.S. Marine Forces Europe spokesman, in a written statement.

Currently, there are about 40 Marines involved but the number could fluctuate anywhere from 10 to 70 during the training period, according to the Marines.

The training comes on the heels of Gen. Stanley McChrystal&#8217;s report on conditions in Afghanistan and the need for an overhauled strategy if the war is to be salvaged. Though not included in the report, McChrystal also is expected to ask for more U.S. troops as part of a revamped plan.

Aside from the Georgians, most other European nations have resisted calls to increase commitments.

But public sentiment is different in Georgia, according to Alexander Rondeli, president of the Tbilisi-based Georgian Foundation for Strategic and International Studies.

While there may be some scattered resistance to sending troops to Afghanistan, the general view on the street is that helping to fight the Taliban also contributes to Georgia&#8217;s own security interests, Rondeli said.

"The public feeling is, we need this professionalism. We need a good army. The Americans are formidable and we can learn a lot from them," he said.

While training with the Marines reinforces Georgia&#8217;s strategic alliance with the U.S. &#8212; something very reassuring to a country at odds with a military powerhouse such as Russia &#8212; Rondeli said taking part in the Afghanistan mission also is a matter of pride.

The training of Georgian troops is not without political sensitivities, though.

While U.S. officials say the training is focused exclusively on counterinsurgency skills, not to prepare Georgia for another fight, Russia has expressed unease with a U.S. military presence in old Soviet territory.

Since Russia&#8217;s rout of Georgia&#8217;s military last year during a five-day war fought over two breakaway Georgian provinces, Russia has accused the U.S. of attempting to rearm Georgia&#8217;s devastated military.

Shortly before the start of the Marine mission, the U.S. Embassy in Tbilisi addressed the issue of arms in a news release.

"No weapons will be provided to the Georgians as part of this training," the U.S. Embassy stated.

Nonetheless, the U.S. military&#8217;s presence comes at a time of continued tension in the Caucasus.

Adding to the strain were recent comments by Georgia&#8217;s Defense Minister Vasil Sikharulidze, who told The Associated Press last month that the training received from Marines could be put to use in the event of a new conflict with Russia.

Hours later, Sikharulidze backtracked from those comments, saying that the training with Marines would be focused on counterinsurgency techniques to be used in Afghanistan.

Just a week later Sikharulidze was replaced as defense minister and given a new assignment in the Georgian government.