U.S. to stop patrols after 50 years, give more duties to S. Koreans 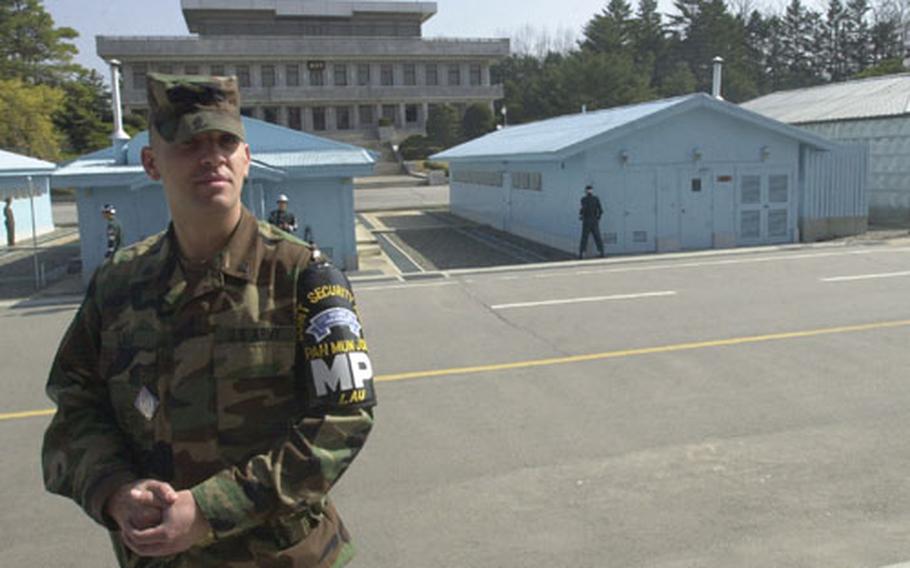 Spc. Craig Lau, a tour guide, stands near conference row in the Joint Security Area Wednesday at Panmunjom during a media tour. The North Korean border runs through the middle of the buildings. Later this year, U.S. troops will no longer patrol inside the Demilitarized Zone, as the mission will be turned over to South Korean Army soldiers. A handful of U.S. soldiers will remain with the Joint Security Battalion, which will still be led by a U.S. Army officer. (Jeremy Kirk / S&S)

Spc. Craig Lau, a tour guide, stands near conference row in the Joint Security Area Wednesday at Panmunjom during a media tour. The North Korean border runs through the middle of the buildings. Later this year, U.S. troops will no longer patrol inside the Demilitarized Zone, as the mission will be turned over to South Korean Army soldiers. A handful of U.S. soldiers will remain with the Joint Security Battalion, which will still be led by a U.S. Army officer. (Jeremy Kirk / S&S) 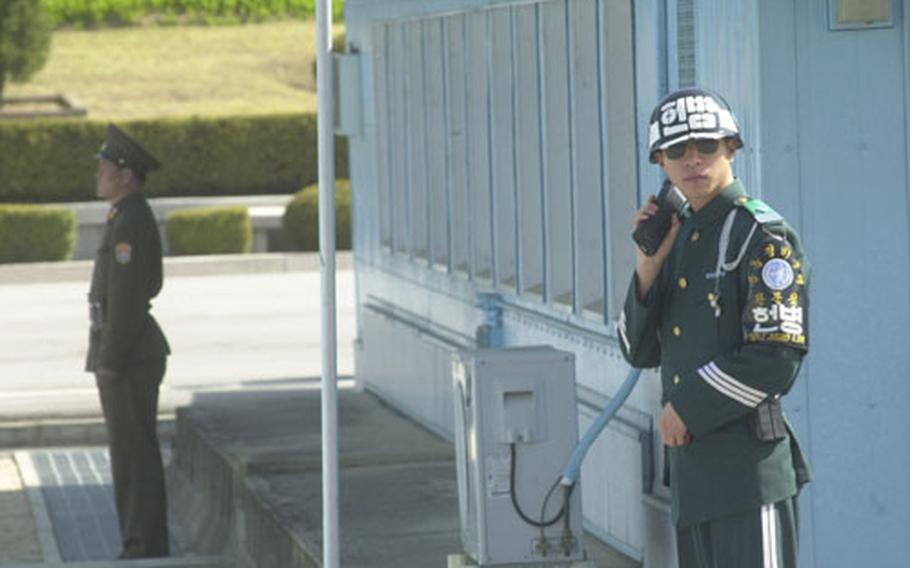 A South Korean soldier stands guard in the Joint Security Area Wednesday at Panmunjom during a media tour while a North Korean guard is visible in the background. (Jeremy Kirk / S&S) 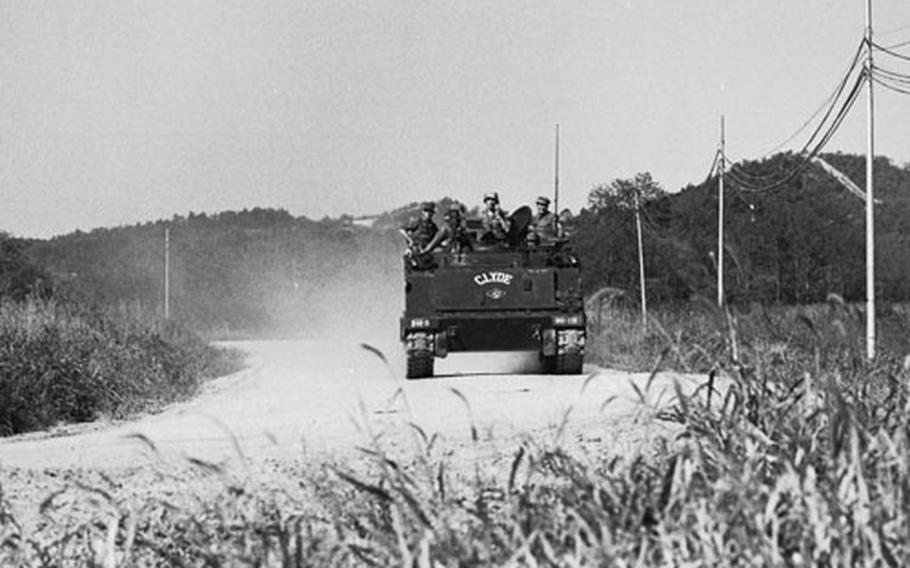 Buy Photo
An armored personnel carrier from 1st Battalion, 9th Infantry, arrives to assist in the search for possible North Korean infiltrators near the DMZ in September 1968. (Bruce Shinn/Stars and Stripes) 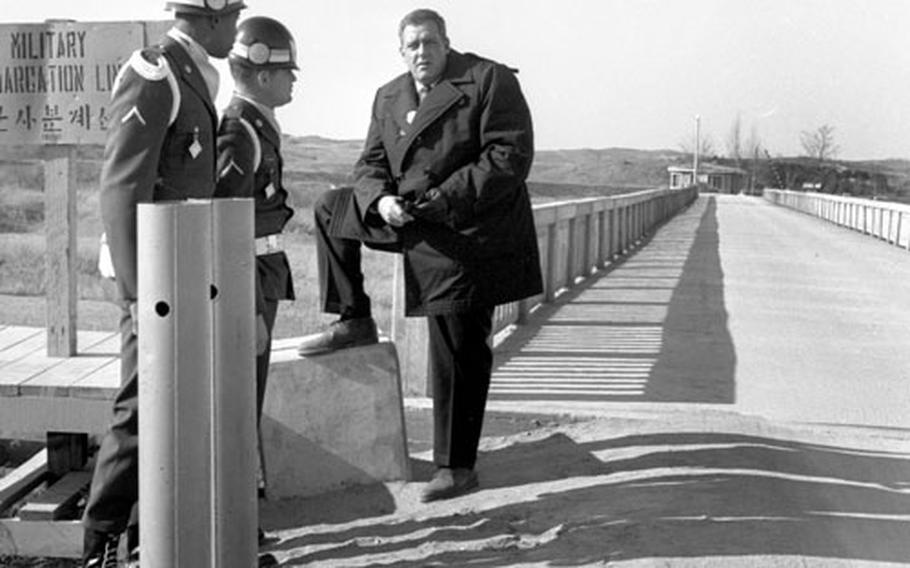 Buy Photo
Korean Demilitarized Zone, December 26, 1963: Joint Security Agency MPs Pfc. Earnest Clark, left, and Pfc Michael J. Mahoney, center, explain their position at the "Bridge of No Return" between North and South Korea to actor Raymond Burr, right. The "Perry Mason" (and, in later years, "Ironside") star shook thousands of hands and braved below-freezing temperatures for several days while visiting troops in Korea; he then moved on to Japan and Okinawa. (Stars and Stripes) 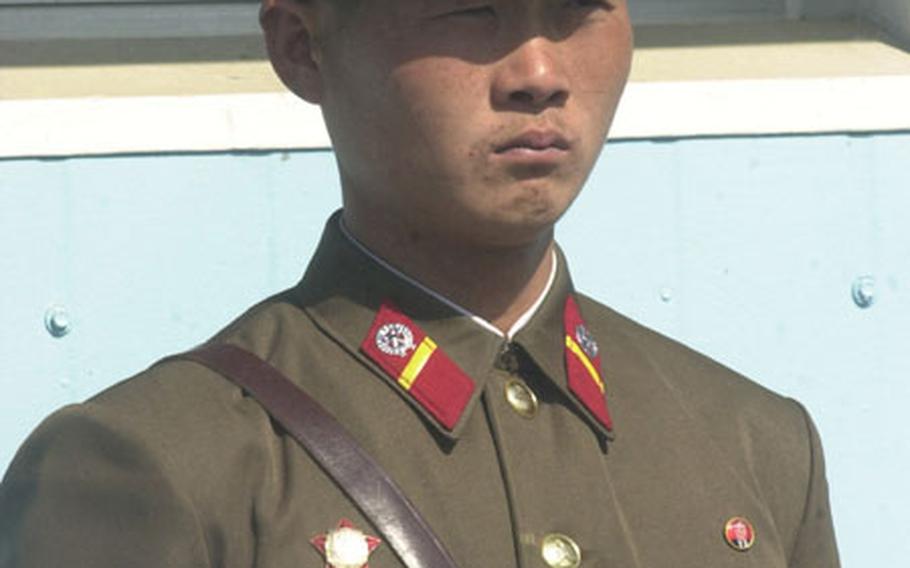 A North Korean soldier stands near a U.N. conference building in the Joint Security Area Wednesday at Panmunjom during a media tour. (Jeremy Kirk / S&S)

PANMUNJOM, Korea &#8212; From a United Nations conference building along the Koreas&#8217; border, Spc. Craig Lau and Pvt. Jorge Fernandez looked out a window at two North Korean soldiers just a few feet away.

For U.S. and North Korean soldiers to be so close is relatively uncommon but the two U.S. soldiers&#8217; job, guiding tours in the Joint Security Area, sometimes puts them in such proximity. It&#8217;s not tense; everyone looks a bit bored &#8212; another day on the job on what&#8217;s termed the world&#8217;s most dangerous border.

But many American faces soon will disappear from this front line under a plan to give the South Korean military more leverage over its own defense. Already, just a handful of U.S. soldiers still put on camouflage face paint, load live rounds into rifles and take positions within eyesight &#8212; and gunshot range &#8212; of North Korean soldiers. But later this year, no U.S. troops will patrol the Demilitarized Zone.

Outpost Ouellette, the last U.S.-staffed outpost &#8212; it&#8217;s about 75 feet from North Korea&#8217;s border &#8212; also will be relinquished. The most strategic spot along the DMZ, it commands a panoramic view of barren North Korean hillsides and, on a clear day, Kaesong &#8212; closest North Korean city and site of a joint North-South Korean industrial complex.

The missions will be turned over as part of a reorganization of U.S. forces in South Korea, including returning smaller bases to the South Korean government. It marks U.S. forces&#8217; gradual pullback from the DMZ, a move partly inspired by high-tech, long-range weapons that make distance less important during a fight, U.S. officials have said.

U.S. Forces Korea could provide no time line for the duty transfer.

The U.N. Command is a U.S.-led, 15-nation consortium which monitors the Armistice Agreement that ended Korean War fighting in July 1953. The DMZ may appear tranquil but the command investigated 22 armistice infractions over the past year and reported 13 major violations, LaPorte said. Those incidents have included firing weapons and illegal crossings of the Military Demarcation Line, the official border that splits the DMZ, he said.

In July 2003, North and South Korean troops exchanged fire between guard posts. But no Americans have been injured for years, officials said. Since the war&#8217;s end, though, at least 89 Americans have died from ambushes, downed aircraft, land mines and other actions, military records show.

Those deaths peaked in the late 1960s but the incidents at that time often went unremarked because dozens of Americans then were dying weekly in Vietnam, said William Hollinger, an operations officer with 7th Infantry Division in Korea in 1968-69. As he wrote in his book, &#8220;The Fence Walker&#8221;: &#8220;If we&#8217;re killed on a patrol or a guard post, crushed in a jeep accident or shot by a nervous GI on the fence, no one will ever write about us in the Times or erect a monument or read a Gettysburg Address over our graves. There&#8217;s too much going on elsewhere; what we&#8217;re doing is trivial in comparison. We&#8217;ll never be part of the national memory.&#8221;

Hollinger wrote that the DMZ then was a wasteland of artillery craters, barbed wire, minefields, graveyards and skeletons of villages. U.S. and South Korean forces recorded hundreds of nighttime firefights with North Koreans.

In 1967 and 1968, with U.S. attention on Vietnam, North Korea waged an aggressive campaign of infiltration and provocations against South Korea, according to both military records and soldiers&#8217; recollections.

Lopez runs www.imjinscout.com, a site with photos and recollections of U.S. soldiers who worked along the DMZ when 2nd Infantry Division troops wore an &#8220;Imjin Scouts &#8212; DMZ&#8221; patch.

Lopez said DMZ duty generally was unpleasant: nights in foxholes with sleepy GIs as North Koreans cut the fence lines to infiltrate the south. He remembers North Korean propaganda blared over loudspeakers, such as, &#8220;GI go home before we slit your throat!&#8221;

In 1991, the U.S. military relinquished its last full sector of the DMZ. Now it only conducts patrols around Tae Sung Dong, the DMZ&#8217;s only inhabited village, and Outpost Ouellette.

If conflict were to erupt, officials have said, the U.N. Command &#8212; led by LaPorte &#8212; would head an international force working with the Combined Forces Command, the U.S.-South Korean integrated war-fighting headquarters also led by LaPorte.

&#8220;Today the members of the United Nations Command coalition in Korea remain vigilant in an uneasy peace,&#8221; LaPorte said.