U.S. to step up efforts to train, equip African peacekeepers in Somalia 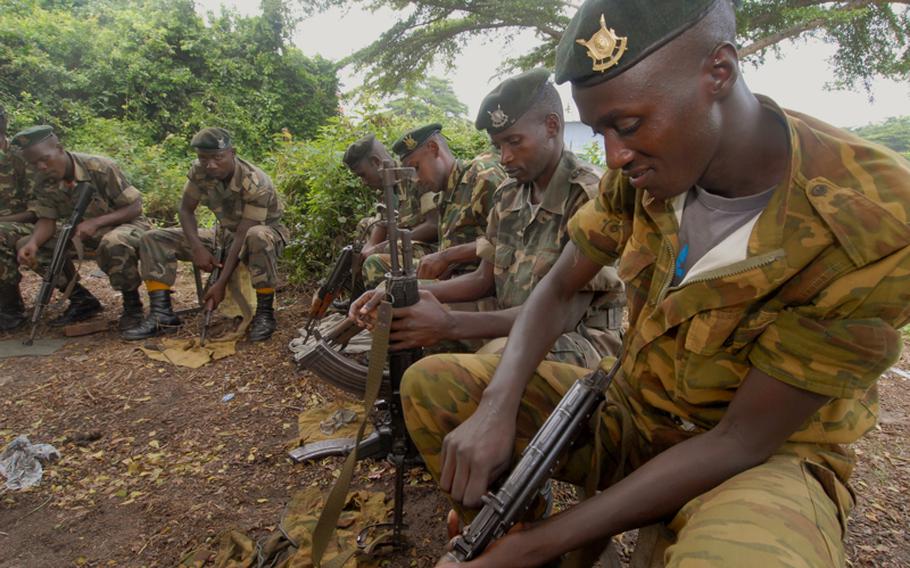 Burundi peacekeepers prepare for their next rotation to Somalia. U.S. forces will step up efforts to train and equip African Union peacekeepers fighting Islamic militants in Somalia. (Rick Scavetta/U.S. Army)

STUTTGART, Germany &mdash; U.S. forces will step up efforts to train and equip African Union peacekeepers engaged in a fight against Islamic militants in Somalia, the commander of AFRICOM said.

Gen. William &ldquo;Kip&rdquo; Ward, in a speech Tuesday at a Washington-based think tank, said U.S. policy would remain on course as his command looks for ways to lend more support to African Union soldiers deployed in Somalia to prevent the country&rsquo;s weak transitional government from being toppled.

However, more than five years after a Transitional Federal Government was installed in Somalia with international backing, there has been little progress in ending the chaos and anarchy that has gripped the country on the strategic Horn of Africa since the government of dictator Mohamed Siad Barre was toppled in January 1991. Al-Shabab, the home-grown Islamic militant group, has increased in strength and recently boasted it had spread its fight beyond Somalia&rsquo;s borders, claiming responsibility for a bombing in Uganda.

Meanwhile, the turbulence on land has left Somali pirates free to wreak havoc offshore in the important shipping lanes off the country&rsquo;s coastline.

In the six years since the U.S. adopted its containment strategy, there have been few signs of progress, prompting critics to ask if it&rsquo;s time to find a new plan. Will more weapons, training and logistical support for peacekeepers make a difference? Are there alternatives that U.S. policy makers should be considering? Or is the current strategy the best choice among a series of unattractive options?

Somalia&rsquo;s U.S.-backed government still depends on African Union soldiers, mainly from Uganda, for protection from al-Shabab. Amid the daily back-and-forth fighting in Mogadishu, thousands of civilians have been killed by small-arms fire and indiscriminate mortar rounds fired by both sides, according to humanitarian groups.

For the U.S., the fear is that the anarchy in Somalia could turn the country into a destination point for groups like al-Qaida, who could take refuge and train for future terror strikes abroad. While there is debate about the likelihood of Somalia serving as a safe haven, the twin bombings in Uganda claimed by al-Shabab also has U.S. officials concerned that al-Qaida&rsquo;s tactics are now being imitated by Somali terrorists.

Nearly two years into the Obama administration, U.S. policy in Somalia remains mostly unchanged since the Bush era: bolster the failed state&rsquo;s federal government with the idea that the clannish society will one day coalesce.

In an interview this month with the South African Broadcasting Corp., President Barack Obama indicated that remained the policy when he told the network that al-Shabab needs to be countered.

&ldquo;The transitional government there is still getting its footing,&rdquo; Obama said. &ldquo;But what we know is that if al-Shabab takes more and more control within Somalia, that it is going to be exporting violence the way it just did in Uganda.&rdquo;

However, some Somalia experts &mdash; while conceding there is no surefire strategy for success &mdash; say the U.S. and others in the international community need to become more flexible in how they deal with Somalia.

Bronwyn Bruton, a Council of Foreign Relations scholar, said in a speech at AFRICOM headquarters on Monday that the U.S. policy in Somalia is badly flawed and attempting to prop up an unpopular transitional government actually could be contributing to the escalation of violence in the country.

The solution in Somalia isn&rsquo;t a military one, according to E.J. Hogendorn, a Kenya-based scholar with the International Crisis Group.

&ldquo;What needs to be done is the TFG must do much more to reach out and reconcile with different local actors on the ground, including moderate elements of al-Shabab, who are not necessarily proponents of the regional expansion of this jihadi activity,&rdquo; Hogendorn said. &ldquo;The international community needs to send clear signals that if they (TFG) do not do this, it will be done for them.

&ldquo;Rather than only dealing with the TFG, the international community should start dealing directly with some of the more successful administrations in central and southern Somalia. Don&rsquo;t channel all the money to the capital.&rdquo;

Jennifer Cooke, director of the Africa program at the Center for Strategic and International Studies, agrees that the U.S. needs to look for other players in Somalia to work with and not focus exclusively on the transitional government. But implementing such a strategy is complicated, she said.

&ldquo;We&rsquo;ve been absent from Somalia for so long we&rsquo;ve lost the ability to identify partners,&rdquo; Cooke said.

And while U.S. strategy revolves around the transitional government and the African Union soldiers who protect it, there is little support in Africa for the African Union Mission in Somalia, which involves 6,000 Ugandan and Burundi troops. Following al-Shabab&rsquo;s bombings in Uganda earlier this month, Ugandan officials said they would consider sending more forces to Somalia. However, no other nation has offered help, and the mission remains well short of the AU&rsquo;s 8,000-troop goal. Other assessments, both by the U.N. and other experts, estimate a peacekeeping force between 20,000 and 100,000 would be required to secure Somalia &mdash; a country about the size Texas.

With no international interest in making a serious military investment, some Somalia scholars say the time has come for a radically different approach: abandon all efforts and let the Somalis figure it out on their own.

During her visit to AFRICOM headquarters, as part of the command&rsquo;s guest speaker program, Bruton argued for a U.S. policy that disengages from dealing with the TFG. Bruton says the approach is too limited and indecisive to reverse the military stalemate. Increased civilian casualties, largely attributed to foreign troops, also have turned the population against the African Union mission, she said.

In addition, the U.S.&rsquo;s continued backing of the mission could actually strengthen al-Shabab, which uses the foreign presence as a rallying point, Bruton said.

That critique goes to the heart of the challenge facing U.S. policy makers, who view the AU force in Somalia &mdash;AMISOM &mdash; as the best option in Somalia. Even before her visit to the Stuttgart headquarters, Bruton&rsquo;s call for a &ldquo;constructive disengagement&rdquo; from Somalia had gotten the attention of AFRICOM leadership. Her paper has been widely distributed and is provoking discussion about U.S. policy in Somalia.

&ldquo;What you&rsquo;ve said&hellip; is that an increase in the size of AMISOM, in your view, is going to be counterproductive to what we are trying to achieve?&rdquo; AFRICOM&rsquo;s civilian deputy commander Anthony Holmes asked Bruton on Monday. &ldquo;There is such a stark contradiction.&rdquo;

While al-Shabab would likely seize control of Mogadishu if AMISOM pulled out, Bruton argues that the terror group would split apart under the burden of governing a place as complex and splintered as Somalia.

&ldquo;Leave Somalis to solve the problem because this has been caused by external intervention,&rdquo; she said. &ldquo;I don&rsquo;t think their solutions include a government right now.&rdquo;

But in the aftermath of the twin bombings in Uganda earlier this month, concern is mounting within the U.S. government that al-Shabab will become more expeditionary in its deployment of terror.

To leave Somalia to its own devices, and hope Shabab disintegrates, requires a risky leap of faith, argues Hogendorn.

&ldquo;That&rsquo;s a big if, that al-Shabab is going to fall apart. Then what you have is something similar to the Taliban in Somalia,&rdquo; he said. &ldquo;There are elements of Shabab quite willing to export their jihad.&rdquo;