U.S., Thai divers tool around under water at Cobra Gold 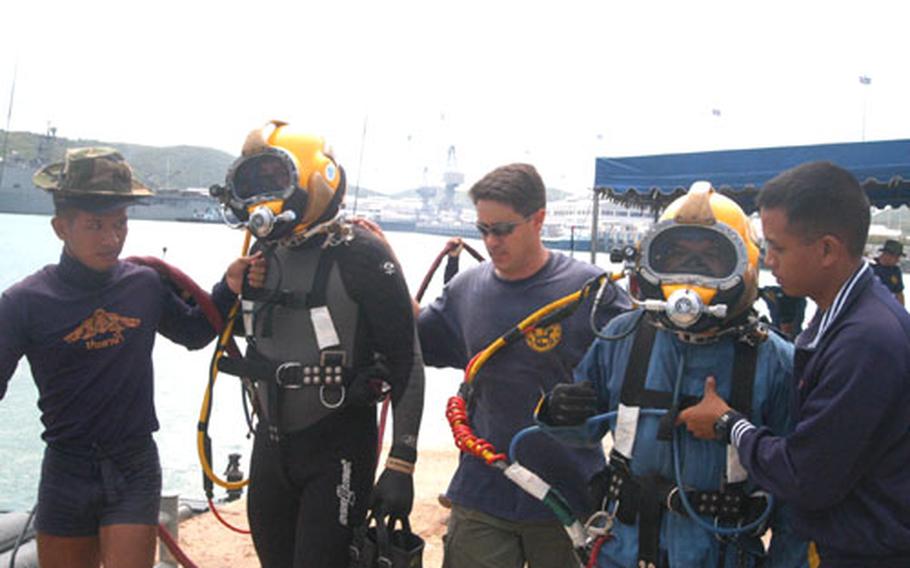 U.S. Navy divers prepare to enter the water with a Thai diver at Sattahip Naval Base, Thailand. (Seth Robson / S&S)

Five divers from Mobile Diving and Salvage Unit 1 out of Pearl Harbor, Hawaii, and two from Underwater Construction Team 2 out of Port Hueneme, Calif., trained with 10 Royal Thai Navy counterparts at Sattahip Naval Base this week as part of the Cobra Gold 2004 exercise.

Cobra Gold 04 is this year&#8217;s version of an annual joint and combined exercise involving 18,500 servicemembers from Thailand, the United States and this year, the Philippines, Singapore and Mongolia.

The divers donned MK-21 Mod 1 breathing systems for the training. Unlike divers using scuba gear, divers using the MK-21 breathe from surface tanks connected to their helmets by long hoses. The helmets allow them to talk to other divers or people on the surface through an intercom.

The salvage rigging involved air bags attached to a large concrete block lying at the bottom of the harbor at Sattahip so divers could move it a short distance, he said.

Divers then made holes in the block using a hydraulic drill. On Tuesday they used a special tool to cut metal rods underwater, Moser said. The cutting tool uses a 200-amp current and oxygen to melt away metal underwater, he said.

Thailand provides an excellent training environment, said Moser, who has extensive overseas diving experience in places such as Micronesia and Fiji.

&#8220;I have gone diving at other locations in Thailand. The sport diving is excellent. There is live coral and a lot of marine life,&#8221; Moser said.

The U.S. divers also are practicing hydrographic survey, pier inspection, and underwater demolition with divers from the Royal Thai Reconnaissance Marines, he said. Underwater construction, salvage and demolition skills are an important part of the U.S. Navy&#8217;s mission, Moser said.

Last year, he helped remove 2 million gallons of oil from the wreck of the USS Mississenewa at Ulithi Atoll in Micronesia. A Japanese suicide torpedo sank the vessel during World War II, he said.

Mobile Diving and Salvage Unit 1 helped clear mines and disabled ships from the Port of Um Qasr in Iraq last year so that humanitarian ships carrying aid for civilians could get through, he said.

The Thai divers participating in the training appeared to enjoy using the high-tech breathing equipment. However, they suggested, they probably could have done the job without it.

One Thai diver said all of the men in his unit had to be experts at holding their breath at depth, a feat helped by the difference in air pressure.

&#8220;In my diving course we are tested holding our breath for 10 minutes at 33 feet. You feel congestion in your chest and you have to use willpower,&#8221; he said.