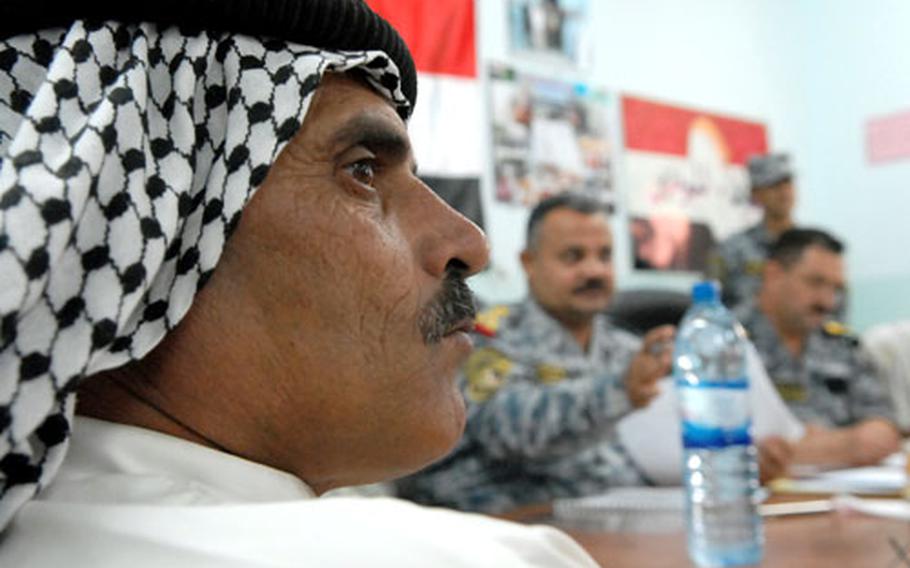 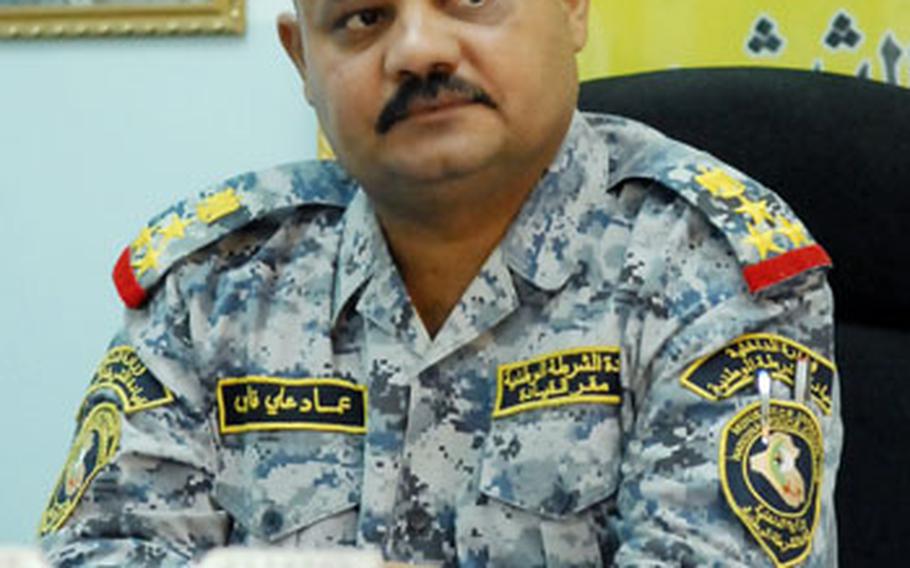 JISR DIYALA, Iraq &#8212; The scene could have been from any number of briefings taking place across Iraq.

Yet Friday&#8217;s presentation stood out because Abd Ali&#8217;s audience was not American leaders or even other members of the Iraqi security forces. Instead, the general was speaking to local "Sons of Iraq" leaders &#8212; men who fall directly under his supervision and work with National Police liaisons nearly every day, in contrast to most other areas in the country.

Leaders in the Jisr Diyala area just south of the city hope for increased cooperation between Sons of Iraq groups and the government by placing those groups under National Police control and encouraging Iraqi officers to handle as much of the day-to-day interactions with the groups as possible.

The Sons of Iraq &#8212; armed civilian groups paid by the U.S. military &#8212; have increasingly come under attack from Iraqi leaders in Baghdad. The groups were born out of the Sunni "Awakening" movement that pledged to renounce terrorist groups and cooperate with coalition forces. Americans now pay thousands of mostly poor Iraqi men and women, including many Shiites, $300 per month to man checkpoints across the country.

Yet many Shiite leaders, already uncomfortable with the growing political presence of Sons of Iraq, say the groups are just militias in disguise and are pushing to disband them. The disagreements have created tensions not just with the groups themselves but also with the Americans, who are the group&#8217;s biggest backers. Giving the National Police a larger role would hopefully give the Iraqi government more of a role in the American-run program.

"The perception is that Sons of Iraq are rogue, and they&#8217;re not," said Lt. Col. Rich Morales, commander of 1st Battalion, 35th Armor Regiment, the American task force in charge of the area. "They&#8217;re actually very disciplined."

Qays Abu Ammash, a Kharghaliya sheikh, has been a Sons of Iraq leader since August 2007 and now oversees 395 security volunteers. In the first six months, Ammash met with American leaders every day.

Now, though, he has a National Police lieutenant who serves as both a partner and a liaison to official Iraqi security forces. He meets with that lieutenant at least every other day and has a meeting with higher-level National Police leaders once a week. Meanwhile, contact with American leaders has dropped off, meaning he sees his Iraqi countrymen more than the Americans.

"This is great because more and more we need to be in the shadows," Morales said.

The liaisons advise the local leaders and make sure they are conforming to the policies of the Iraqi government. Abd Ali even shows pictures of men out of uniform during his weekly meetings to admonish those who let standards slip. Such details are crucial to reassure wary Iraqi leaders that Sons of Iraq groups play a legitimate role in Iraq&#8217;s security solution.

In exchange, the groups provide a much-needed manpower boost in areas that were once some of Iraq&#8217;s most contested hotspots. Qays Shther, an Arafiyah leader, estimates that his Sons of Iraq members man four-fifths of the area&#8217;s checkpoints, with National Police manning the remaining fifth.

The Sons of Iraq, in addition to the obvious inflow of cash and jobs to struggling economies, get a direct line to the government in Baghdad via their National Police contacts. They complain to Abd Ali about problems ranging from electricity shortages to water difficulties, and he forwards the complaints on to the capital. In a country lacking direct geographic representation, that provides a much-needed outlet to vent frustrations.

"They take our voice (to the capital)," said Hamad Cotton Khalaif, a Sons of Iraq leader in the Four Corners area. "I can talk to the government."

Most importantly, Abd Ali can vouch that the government doesn&#8217;t have anything to fear from these Sons of Iraq, giving them a vital endorsement at a time when the program is under siege.

To be sure, Abd Ali leverages this to get the most out of the Sons of Iraq. Leaders aren&#8217;t allowed to speak in the weekly meetings unless they&#8217;ve found a weapons cache that week.

They also compete among themselves for the Iraqi general&#8217;s approval. Morales said one Sons of Iraq leader didn&#8217;t want a bomb team to take a weapons cache his men found because he wanted to ensure Abd Ali mentioned it in his weekly PowerPoint presentation.

Shther said the situation is dramatically different from what it was several years ago. In the past, it would have been fatal just to meet with Iraqi National Police or Iraqi Police. Neighbors would have thought he was a spy. On Tuesday night, though, Shther invited several Iraqi Police over to his house for the traditional meal breaking the Ramadan fast.

"Two years ago, you couldn&#8217;t imagine that these things would happen," he said.