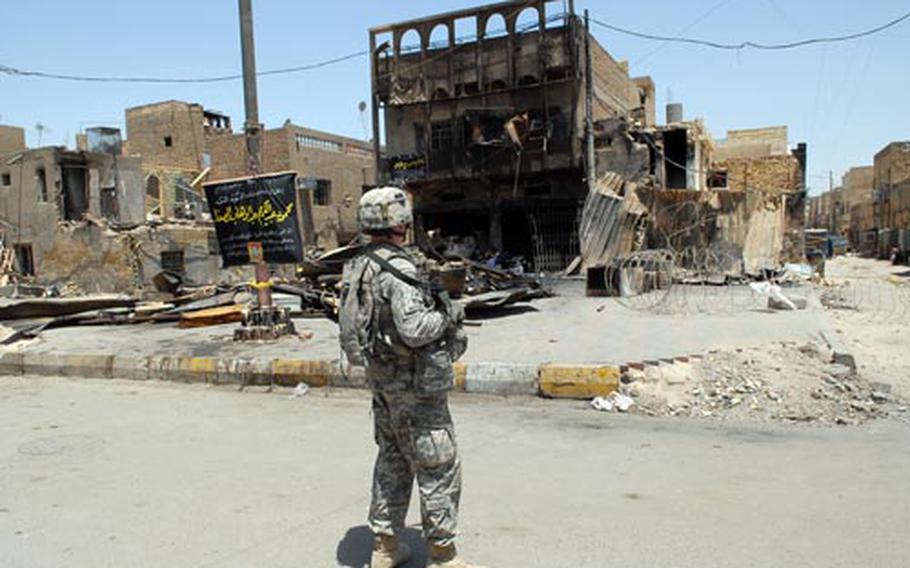 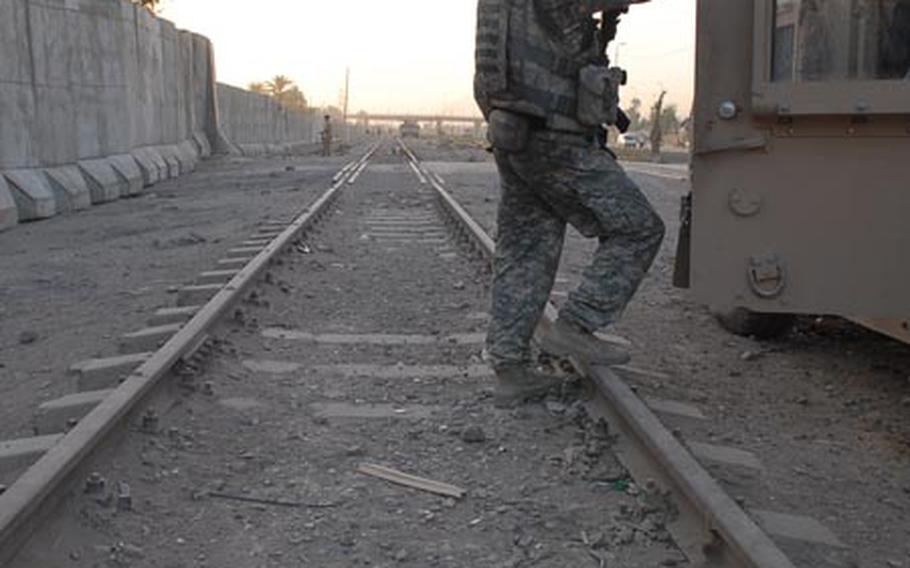 Sgt. Christian Baker, 25, of Pittsburgh, talks to another soldier during a patrol along a security wall being built around the northwest Baghdad neighborhood of Hurriyah. (Michael Gisick / S&S) 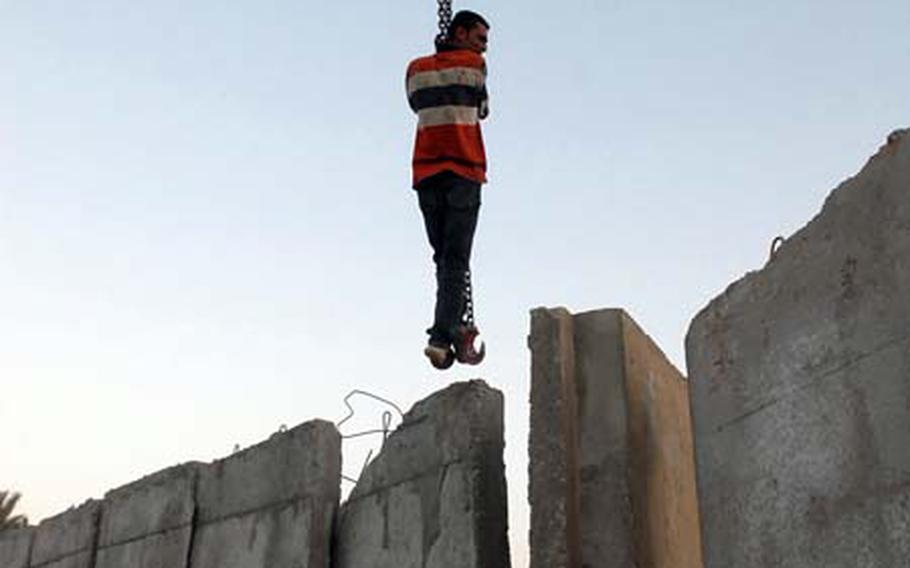 An Iraqi worker descends from atop a security wall being built around the Hurriya neighborhood in northwest Baghdad. U.S. officials say such walls have contributed to improving security in other parts of the capital. (Michael Gisick / S&S)

BAGHDAD &#8212; Army Capt. Josh West and about 30 other U.S. soldiers were attending a weekly neighborhood council meeting when a truck bomb went off a block away, ripping through an outdoor food market crowded with the dinner rush.

"It actually sounded pretty small," West said Tuesday, six days after the bombing in the Shiite neighborhood of Hurriyah. "At first I thought it was a mortar round."

But as the soldiers hit the street, they were met with an awful, furious scene &#8212; burnt bodies and wailing crowds, black smoke. More than 60 people were killed, Iraqi officials have said, making it the deadliest bombing in Iraq since March. In the aftermath, some among the survivors hurled rocks at the U.S. and Iraqi troops working to block off the area.

"I don&#8217;t think they blamed us or the Iraqi forces for the attack, but they were upset that we weren&#8217;t able to stop it," West said. "There was a lot of emotion. It was a terrible, devastating attack."

Many assumed the bombing had been carried out by Sunni militants, who have used such tactics in the past. But U.S. military officials blamed the attack on a Shiite "Special Group" led by a Hurriyah native named Haydar Mehdi al-Fawadi.

If true, the bombing would seem to mark an escalation in tactics &#8212; Shiite militants have generally shied away from indiscriminate, large-scale attacks on civilians, especially other Shiites.

The "Special Groups" are not believed to operate under centralized control, however, and the term itself has come to serve as something of a catch-all in the military lexicon, largely used by U.S. officers as a means of differentiating a variety of splinter groups from the influential Shiite cleric Muqtada al-Sadr.

Col. Bill Hickman, commander of 2nd Brigade, 101st Airborne, said Wednesday it was also possible the bomb was meant to target the Americans at the meeting nearby.

As described by the military, al-Fawadi&#8217;s group fits with the breakaway members of Sadr&#8217;s Mahdi Army focused on Mafia-like criminal rackets. The U.S. has accused Iran of funding and training the groups, a charge the Iranian government has denied.

West said his unit, Company A, 1st Battalion, 502nd Infantry Regiment, has been searching for al-Fawadi, who is wanted on murder, extortion and other charges, since the unit arrived in Hurriyah in October. He said al-Fawadi&#8217;s group has, at most, "a couple hundred" members.

The group&#8217;s main income, West said, is believed to come from the rents it charges on homes taken from Sunni residents who were forced out of Hurriyah during fierce sectarian fighting in 2006 and 2007. With the Iraqi government mulling plans for an organized resettlement of displaced families, West said, al-Fawadi saw a threat, and the bombing, since it would likely be attributed to Sunnis, was meant to stoke sectarian tensions, he said.

"These guys are basically gangsters," West said. "The resettlement threatens their income."

West&#8217;s unit has received a "steady stream" of tips implicating al-Fawadi in the bombing, he added. Some Hurriyah residents, though, have been quoted by The Associated Press and other news organizations expressing skepticism.

Before the attack, violence had been relatively low in Hurriyah for months, and West said much of the violence that did occur involved turf battles between al-Fawadi&#8217;s group and another smaller group.

"Things were going really well," West said. "I was doing a lot of knocking on wood."

In the days since the bombing, shops surrounding the blackened buildings at the bomb site have reopened, and the crowds have started to return. U.S. troops delivered a second shipment of bricks, cement and painting supplies to the market on Tuesday. They have also distributed packages of food to homes that lost family members in the attacks.

Work continues on a concrete wall going up around Hurriyah, a security measure U.S. troops have adopted elsewhere in Baghdad. The military is also training a group of about 120 "Sons of Iraq," a U.S.-funded group of armed civilians that will be used to guard checkpoints as well as the five planned entrances through the security wall.

The Iraqi government&#8217;s plan to resettle the neighborhood&#8217;s Sunnis, meanwhile, remains at the talking stage, West said. And members of the unit say the anger that boiled over in the hours after the attack seems to have subsided.

"You could understand why people were upset," said Sgt. Christian Baker, 25, of Pittsburgh, during a quiet patrol through Hurriyah on Tuesday night. "That was a completely horrible thing."