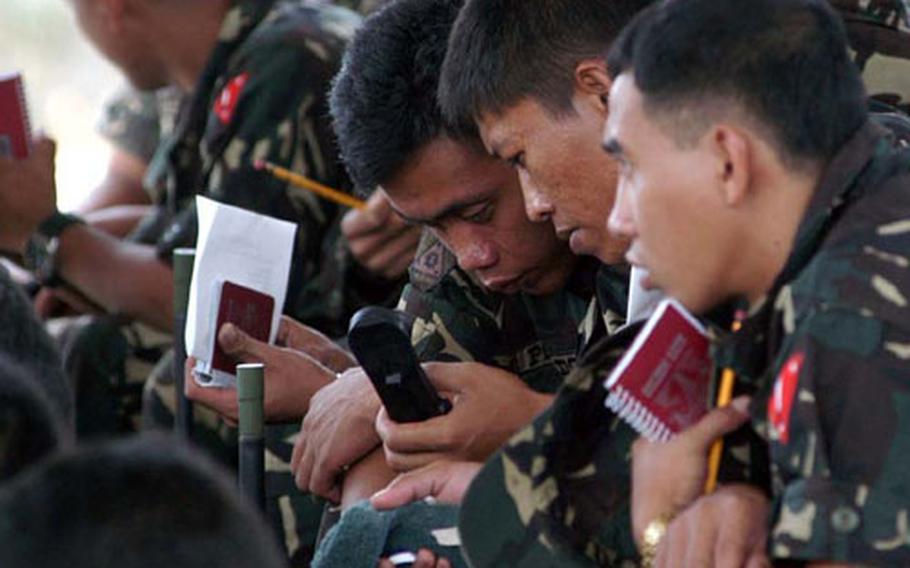 The five modules include setting up a security operations center for surveillance and communications, teaching helicopter pilots night-vision technology and creating special forces soldiers in the northern Philippines.

The final two modules, at the dusty camp in the southern Philippines, are designed to create battalions of infantrymen and leaders in the southern island of Mindanao, where Philippine combatants fight rebel and terrorist groups regularly.

The Light Infantry Battalion module will train one marine and three army battalions by the end of the year. The battalions are broken into companies for the training.

&#8220;The majority of their weaknesses are fundamental in nature,&#8221; said the LIB-training commander. For security purposes his and his team&#8217;s names have been withheld.

The module starts with individual training and gradually expands to the squad and company level &#8212; and later the battalion. It&#8217;s basic soldiering: watching your buddy&#8217;s back for the good of the group, working in teams and having the skills to function without constant command.

The first lesson was zeroing a weapon, which costs ammunition but creates a better shooter. The training also includes combat medicine, small unit leadership, and human rights &#8212; something not previously taught.

Teaching the officers &#8212; and the NCOs &#8212; to change their entire approach to leadership took some persuasion. In many cases, U.S. NCOs paved the way by jumping in and showing how it&#8217;s done.

&#8220;Leadership by example from our NCOs is really important here,&#8221; the commander said.

To punctuate the point, instructors created a training scenario where the leaders are killed. It showed the importance of teaching everyone to step up and fill a leadership void when necessary.

The Philippine NCOs are taught in advance so they can help the troops when they begin.

Members of a special group also are training to serve as instructors once the U.S. mission is over, ensuring a long-term influence.

The modules enhance the AFP&#8217;s capability to fight domestic terrorism, but it&#8217;s not targeting a specific group &#8212; and it&#8217;s not designed to help in other world conflicts, the commander said.

The program is funded and controlled separately from the many other combined U.S.-Philippine missions, such as Balikatan, which ended last week.

The LIB module is the most expensive of the five, but it also trains the most people. The biggest portion of the expense is buying modern communications systems, replacing some of the Philippine military&#8217;s Vietnam War- era equipment. New radios will help the Philippine forces communicate within a combat area, and back to headquarters. The equipment budget also funded 122 night-vision goggles.

The module has had a few hitches. The training had to be postponed after the troops scheduled to begin last week were called into combat.

The delay is a good example of why the training is necessary in the Philippines. Graduates immediately are sent to battle. The marines who already finished had to skip their graduation ceremony because they were called to action.

The U.S. trainers haven&#8217;t had any feedback from those who graduated, but they believe the program is very successful. That&#8217;s good news for the Philippines more than for the trainers, they say.