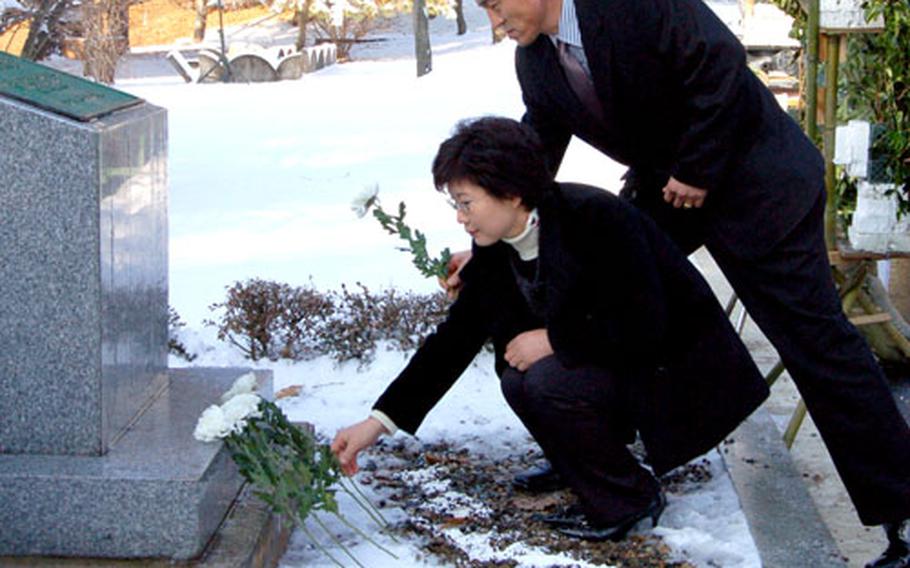 Chang Chun-ki places a flower at the memorial for his brother, Cpl. Jang Myoung-ki, a Korean Augmentee to the U.S. Army who was killed during a firefight in the Joint Security Area on Nov. 23, 1984. (Jimmy Norris / S&S)

PANMUNJOM, South Korea &#8212; Soldiers from the U.S. and South Korean militaries gathered in the Demilitarized Zone&#8217;s Joint Security Area on Wednesday to honor a fallen comrade.

As they have every year since 1984, members of the United Nations Command Security Battalion gathered at a small memorial outside Freedom House to lay wreaths, play taps and conduct last roll call for South Korean army Cpl. Jang Myoung-ki.

&#8220;The late Corporal Jang is one of our heroes, who have made it possible for the Republic of Korea to be in existence today,&#8221; said Lt. Col. Jeon Dong-jin, battalion deputy commander. &#8220;Thus after 20 years from the day of his death, his name is still deeply engraved in our hearts.&#8221;

North Korean soldiers pursued him across the border while firing their weapons.

&#8220;Today, the whole world should stop and honor Corporal Jang, not as a gesture of endorsing any nation or its current political policy, but rather in honor of all brave men who gave their lives for others,&#8221; said battalion commander Lt. Col. Michael Anastasia. &#8220;Twenty-three years ago, on this sacred ground, Corporal Jang did his duty and fought so a stranger could live his life free from oppression, injustice and brutality.&#8221;

Jang&#8217;s father, Jang Dae-yoon, said his family is grateful for the annual ceremony.