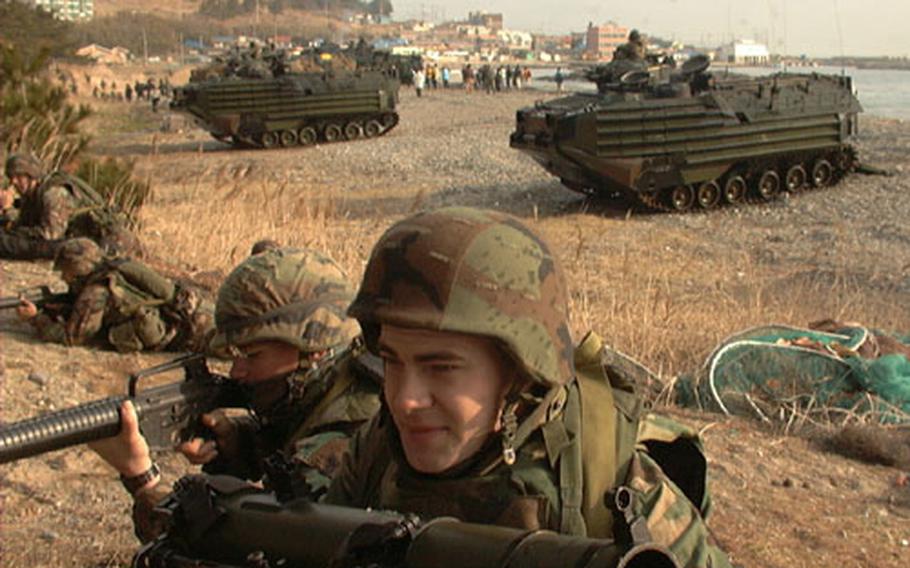 U.S. Marines await word to push inland on Friday during an amphibious landing exercise off Pohang, South Korea. Leathernecks made the beach assault along with their South Korean Marine counterparts. (Franklin Fisher / S&S)

U.S. Marines await word to push inland on Friday during an amphibious landing exercise off Pohang, South Korea. Leathernecks made the beach assault along with their South Korean Marine counterparts. (Franklin Fisher / S&S) 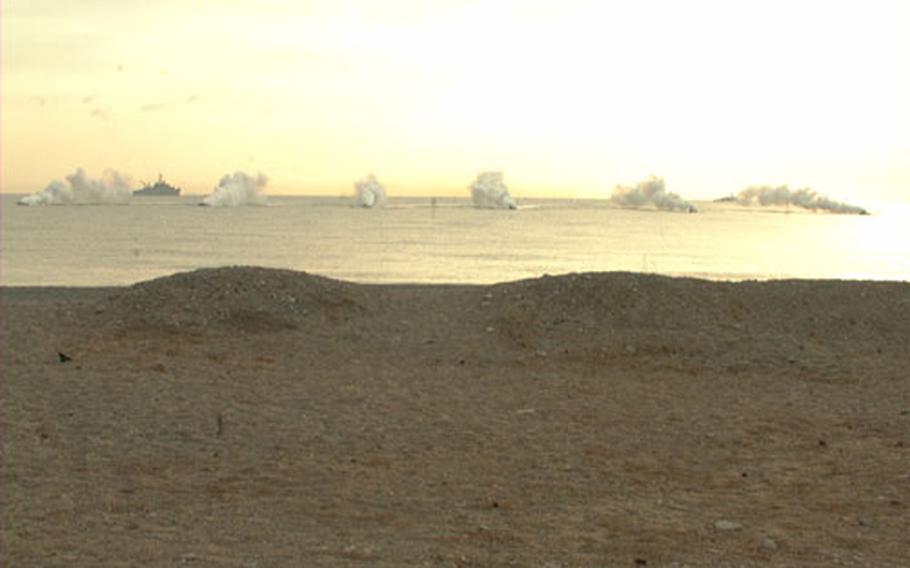 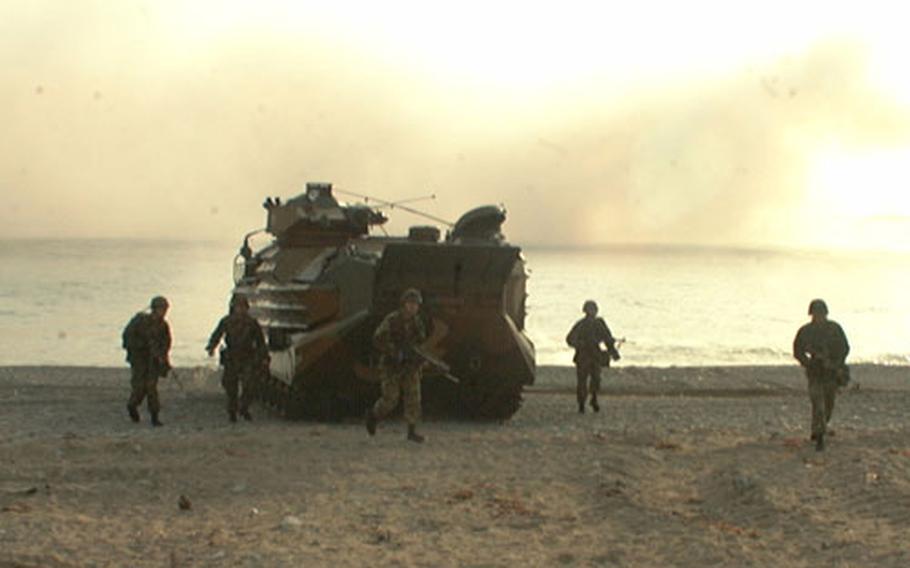 A combined U.S.-South Korean Marine landing force had to take and hold a stretch of coastline, which would open the door to a larger ground thrust inland against the enemy.

U.S. and South Korean Marines were off the coast at Toksok-ri Beach, a narrow strip about 18 miles north of Pohang. Landmines awaited the troops on portions of the beach, a lethal welcome.

Waves of helicopters beat toward the land as the AAVs disgorged battle-decked Marines who would pound onto the beach, scrambling into fighting positions on the wet sand.

And as successive assault waves landed, those first ones ashore would push forward, trying to take more ground.

This was an exercise, a rehearsal Friday of beach assault methods the Navy and Marines would have to use in wartime. It was part of the RSOI/Foal Eagle exercise.

It also, said Air Force Lt. Col. Mike Caldwell, a U.S. Forces Korea spokesman, &#8220;is how the Marines fight. They&#8217;ve got to come ashore, take the beachhead, secure it, then start moving farther forward, in order to push the enemy back.

On Friday, most of the assault craft launched from the USS Juneau, part of an offshore naval amphibious force whose vessels included, among others, the USS Essex. Helicopters, also launching in successive waves, beat their way towards land.

In the waters below were the AAVs, each breaking a crest of foam as it plowed low through the water toward shore. As they drew closer to land, each AAV released a screen of thick white smoke meant to afford some concealment.

To simulate enemy landmines that might await attacking Marines, the U.S. Navy set off a line of explosives near the water&#8217;s edge. Each erupted in a ball of bright orange flame, sending a black smoke ring curling aloft.

Having reached land, the AAVs rose from the surf, clanked onto the rocky beach, and rumbled to a halt. Marines in heavy packs dashed out and took up fighting positions on the wet sands, then, as further assault waves landed, began moving farther forward.

The exercise schedule called for the Marines to repeat the beach assault Saturday. Marine 1st Sgt. Ramon Diaz was one of nine Marines who came ashore in an AAV and set up mortars that in actual battle would provide some of the supporting fire for troops trying to push inland against the enemy. They were from Company G, 2nd Battalion, 4th Marine Regiment, part of the 1st Marine Division.

&#8220;They sharpen up on their raid skills &#8212; amphibious raids,&#8221; Diaz said of his Marines, some of whom had lined up several 60 mm mortars along a rocky strip of beach only yards from where the surf was washing in with a low, steady rumble.

The landings were a chance for Marines such as Cpl. Eric Ettinger to get more practice in adapting immediately to the demands of varied terrain.

But until the word came, the troops stood by their weapons.