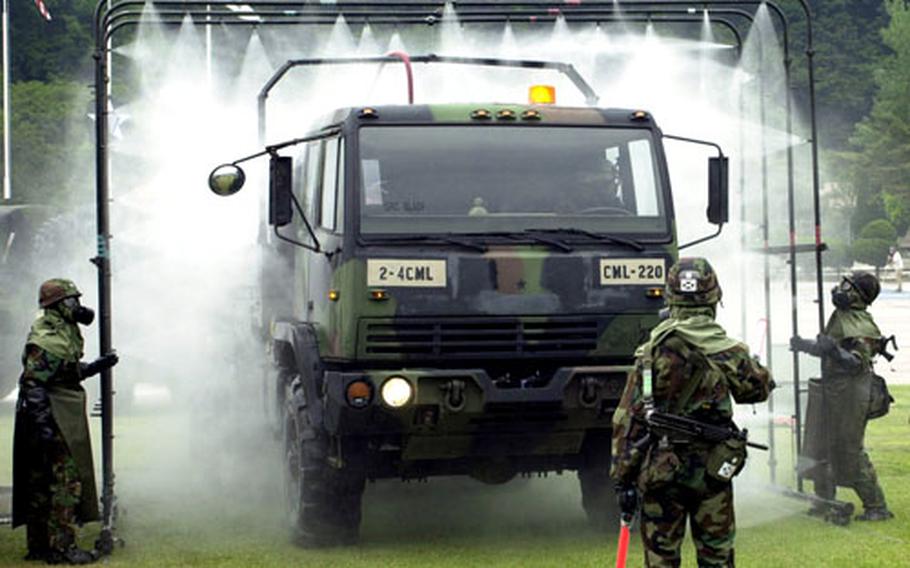 A vehicle goes through a portable car wash as the first phase of decontamination during a chemical-attack-response exercise Tuesday at Camp Casey, South Korea. (Jon Rabiroff / S&S)

A vehicle goes through a portable car wash as the first phase of decontamination during a chemical-attack-response exercise Tuesday at Camp Casey, South Korea. (Jon Rabiroff / S&S) 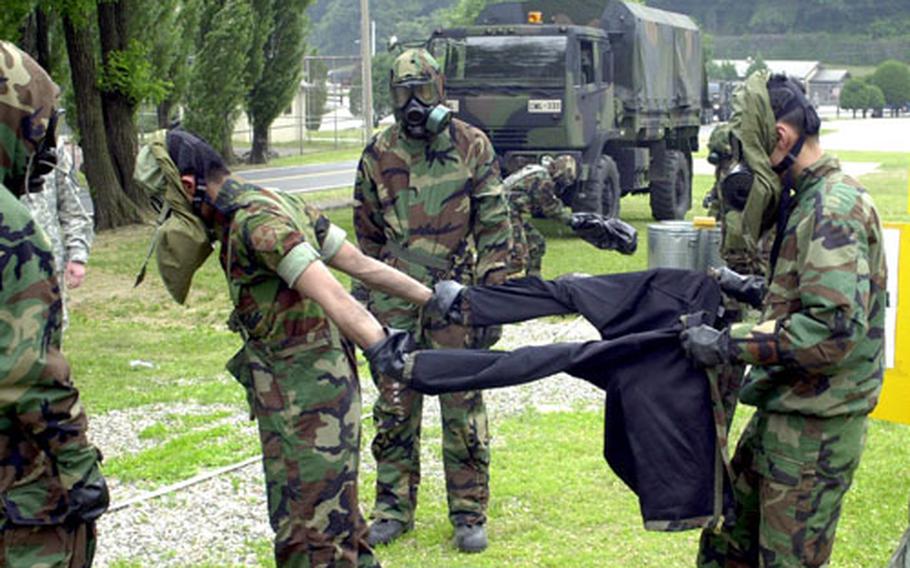 Clothing is removed from a soldier during the joint training exercise Tuesday at Camp Casey. U.S. and South Korean soldiers compared procedures in reacting to a simulated chemical attack. (Jon Rabiroff / S&S) A soldier is tested for chemical contamination during the chemical-attack-response exercise. (Jon Rabiroff / S&S) 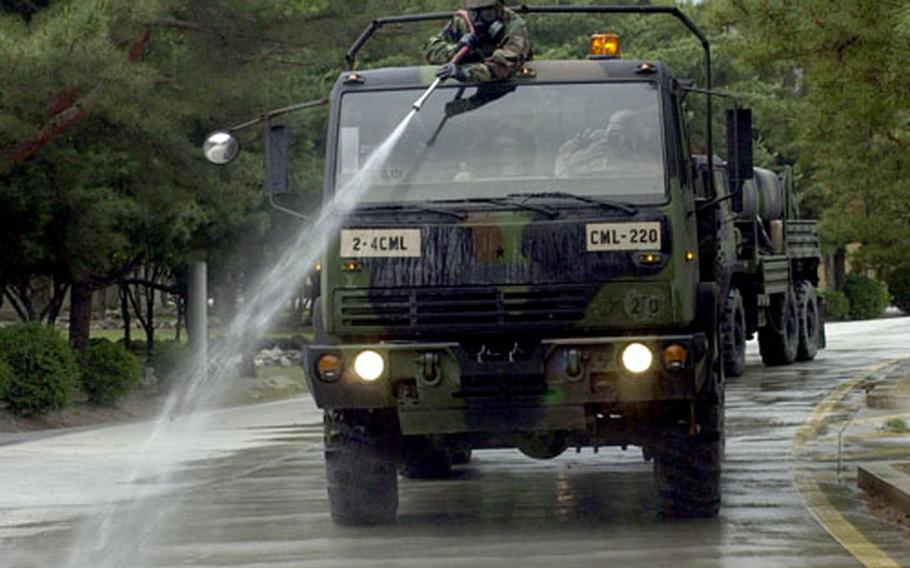 Soldiers hose down the road during the mock chemical attack and response exercise. (Jon Rabiroff / S&S)

"I think that is based on [their] much bigger feeling of threat," he said after a joint training exercise Tuesday, during which U.S. and South Korean chemical-response units compared procedures. "The U.S. really hasn&#8217;t faced chemical weapons, and the South Koreans really do face the threat of chemical weapons. I think it is a larger focus for them.

While recent nuclear tests and talk out of North Korea have grabbed the world&#8217;s attention, reports in recent years indicate that perhaps an even bigger threat to South Korea and the world at large may be the chemical weapons being developed there.

The Associated Press reported last week that it is "widely believed the North has a chemical capability that it could unleash in the early stages of a land war to demoralize defending forces and deny the use of mobilization centers, storage areas and military bases."

A 2007 Popular Mechanics investigative report stated that according to defectors, South Korean intelligence agencies and other sources, North Korea has built "one of the world&#8217;s most extensive biochemical warfare programs."

"The weaponry is thought to have the potential to decimate [South Korea] and the 28,000 U.S. troops stationed there," the story said.

Popular Mechanics reported that former weapons inspector Christopher Davis blamed the relative lack of attention North Korea&#8217;s chemical capabilities have received on "nuclear blindness," or "the tunnel vision &#8230; brought on by the mistaken belief that it is only the size of the bang that matters."

Fourth Chemical Company Capt. Zach Brainard said Tuesday&#8217;s joint training exercise had been in the planning stages for months, but the timing of it was "convenient" given North Korea&#8217;s recent acts of aggression.

"Even without North Korea&#8217;s current actions, this would be important," he said, referring to his South Korean counterparts and the need for "a good understanding of each other&#8217;s tactics and equipment."

During the exercise, a chemical attack was simulated, after which U.S. and South Korean soldiers neutralized and cleaned up the area. The personnel and equipment were then cleaned and tested as they were run through various phases of decontamination.

Staff Sgt. Aaron Maury, who was one of those who stripped down to his shorts during his decontamination by South Korean soldiers, said, "The water was a little cold, but it was worthwhile to see how they do it versus how we do it."

Kent added, "I talked to some of the ROK platoon leaders and I looked at their equipment. I think we can learn a lot from each other."