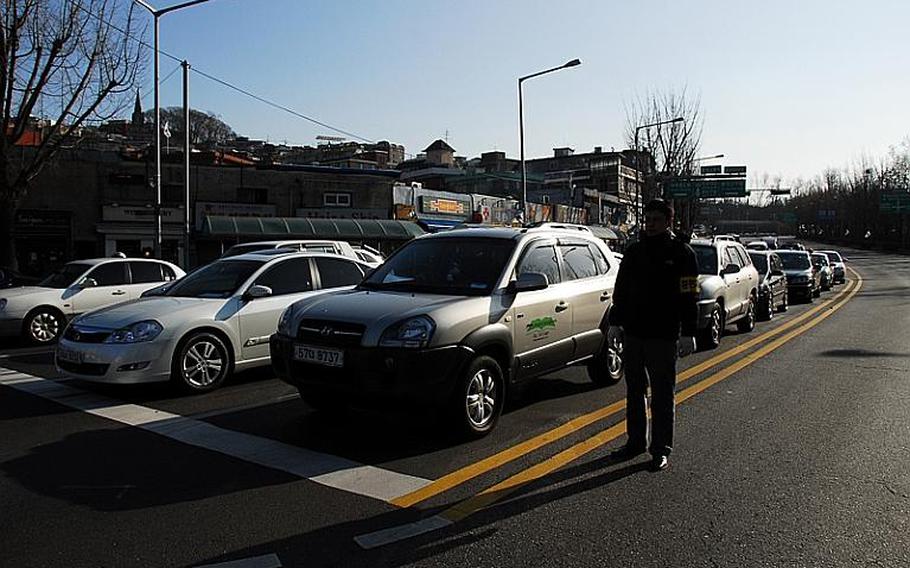 Traffic sits at an intersection just outside U.S. Army Garrison-Yongsan on Friday afternoon during a 20-minute civil defense drill. Such drills are held regularly but usually receive little attention, unlike Wednesday&#39;s drill, which comes three weeks after the North Korean bombardment of a South Korean island. (Ashley Rowland/Stars and Stripes)

In some of his first public remarks since North Korea&rsquo;s bombardment of Yeonpyeong Island on last month, U.S. Forces Korea commander Gen. Walter Sharp said the allies will plan more exercises to prepare for both limited assaults and full-scale attacks from the North.

&ldquo;Though involving less loss of life than the attack on the Cheonan, the North&rsquo;s attack on the northwest island (of Yeonpyeong) crossed significant thresholds and represented a worrying trend towards more frequent and more violent provocations,&rdquo; Sharp said at a dinner for the East Asia Institute at the Shilla Hotel.

The Nov. 23 artillery assault killed four people and marked the North&rsquo;s first attack on civilians since the Korean War. It was the second attack against the South this year: A North Korean torpedo sank the warship Cheonan in March, killing 46 sailors.

Sharp said the U.S. and South Korea must &ldquo;find ways to change North Korea&rsquo;s strategic calculus and end the cycle of provocation.&rdquo;

&ldquo;It&rsquo;s difficult to determine exactly why North Korea engages in attacks and provocations,&rdquo; he said. &ldquo;but it&rsquo;s likely a complex mix of motives and objectives are operating, including an effort to buttress regime legitimacy and a cohesion among the elites as well as shore up succession while addressing policy goals.&rdquo;

Since the attack on Yeonpyeong, top U.S. officials have called for China to increase its pressure on North Korea to curtail its provocations and end its nuclear program. North Korea revealed a new uranium enrichment facility last month.

Sharp did not directly address the safety of the 28,500 U.S. troops stationed on the peninsula, but touted the benefits of a slowly expanding tour normalization program that allows more servicemembers to bring their families to South Korea. U.S. troops have typically served one-year unaccompanied tours in South Korea, but approximately half of the troops will eventually be stationed there with their families on two- and three-year tours.

&ldquo;There is no reason that families should not be here in Korea,&rdquo; said Sharp, adding that North Korea&rsquo;s attacks had strengthened rather than weakened the decades-old U.S.-South Korea military alliance.

Earlier in the day, U.S. ambassador to South Korea Kathleen Stephens told the American Chamber of Commerce in Korea that &ldquo;the United States stands firmly with the Republic of Korea,&rdquo; and said the two countries had been working closely through military and diplomatic channels to develop plans to respond firmly to North Korean attacks.

In response to criticism from an audience member that the U.S. bears responsibility for the division of the peninsula, Stephens said it was her &ldquo;deepest desire&rdquo; to see the peaceful, democratic reunification of the two Koreas.