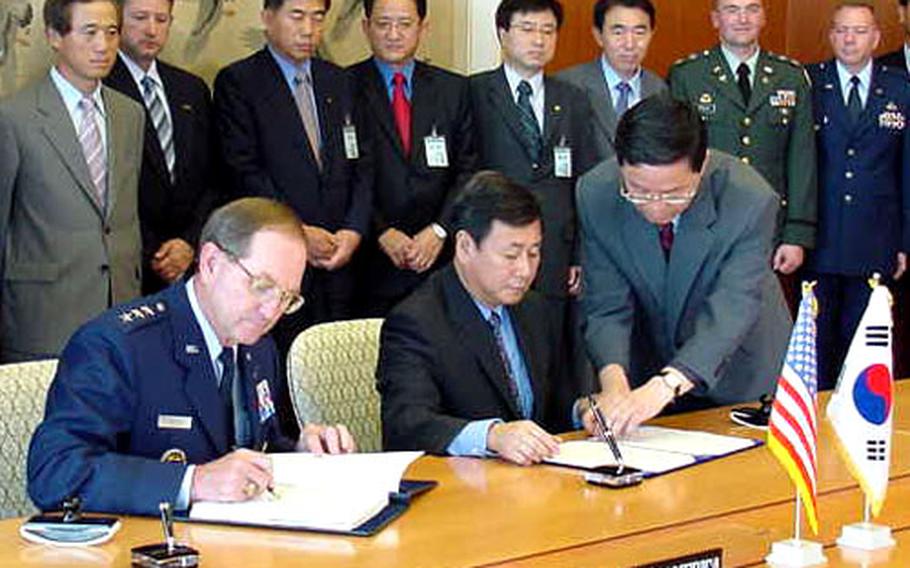 Under the agreement, USFK now will use the South-North Pipeline, a commercial system completed in 2000 and replacing the Trans-Korea Pipeline, in use by USFK since 1971.

&#8220;The major significance is age and capacity. The South-North Pipeline is a tenfold increase in our ability to provide fuel forward,&#8221; said Lt. Col. Ralph Wells, joint petroleum officer in the USFK assistant chief of staff for logistics office.

The new pipeline can handle more than 180,000 barrels a day, Wells said.

The 10-year agreement includes a provision for the U.S. to pay around $7 million in transition costs, officials said. South Korean Foreign Ministry officials, at a morning news conference, said the annual costs to the U.S. military would rise from about $4.7 million to $9.7 million.

The new system will &#8220;greatly enhance USFK&#8217;s petroleum transportation capabilities, contributing to maintaining more efficient logistical support between the ROK and U.S. and strengthening security of the Korean peninsula,&#8221; a joint statement read.

The new system also will offer upgraded environmental protections over the old pipeline, Wells said. The South-North Pipeline is a &#8220;state of the art&#8221; infrastructure system with automated controls to detect and contain possible leaks, he said.

South Korean environmental groups long have complained about the aging Trans-Korea Pipeline, saying it was prone to cracks and leaks. The pipeline was built to provide fuel to U.S. bases without using the roads or rails, officials said.

U.S. and South Korean officials had been looking for a new system since the early 90s. With the new pipeline in use, the South Korean government likely will return land near the old pipeline to private landowners, officials said.