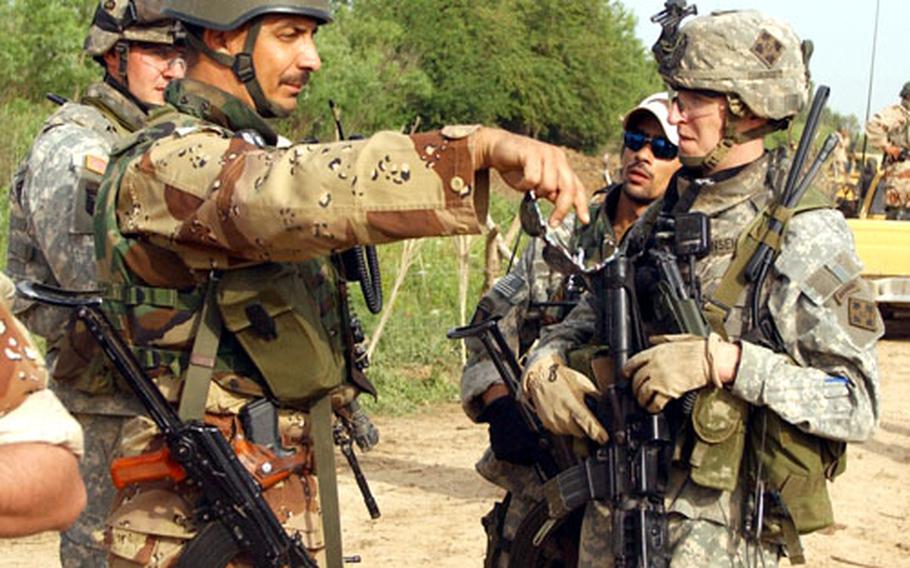 Capt. Matthew Jensen talks to Maj. Anwar of the Iraqi army during a patrol into an insurgent sanctuary near Muqdadiyah. (Jeff Schogol / S&S)

Capt. Matthew Jensen talks to Maj. Anwar of the Iraqi army during a patrol into an insurgent sanctuary near Muqdadiyah. (Jeff Schogol / S&S) 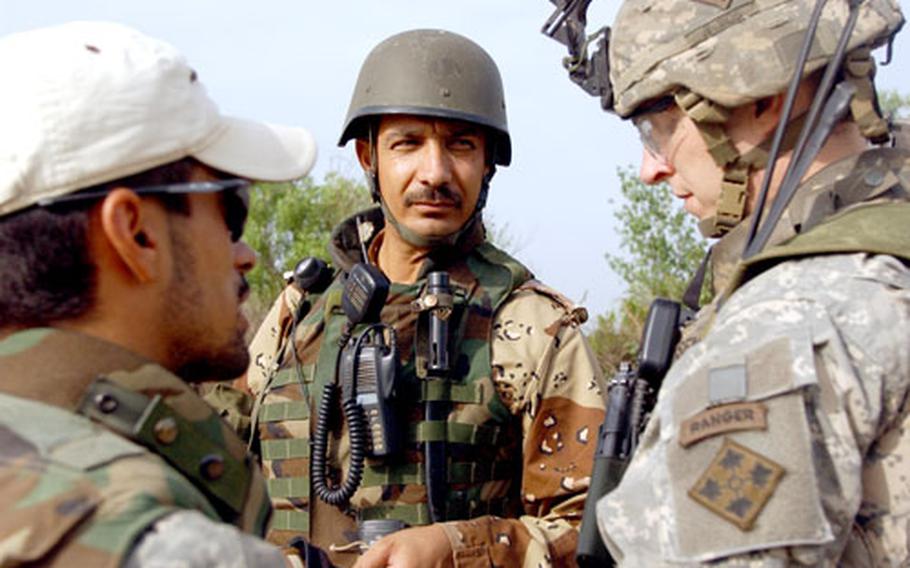 MUQDADIYAH, Iraq &#8212; They call it &#8220;the breadbasket,&#8221; a lush area of farmland with palm groves, apples trees and irrigation ditches flowing with murky green water.

For the insurgents, the breadbasket also is a place to store weapons and flee to after attacks, said Maj. Jeffrey French, 37, executive officer for the 1st Squadron, 32nd Cavalry Regiment.

On this morning, Jensen&#8217;s job is to sit back and sometimes provide advice as two Iraqi companies search the area for a weapons cache.

French said the mission is a good confidence-builder for the Iraqi troops, who had been hesitant to come into the region before and who will eventually have to go in with or without coalition assistance.

Jensen, of Omaha, Neb., said the Iraqis planned the mission and he arranged helicopter support.

Within minutes of the troops&#8217; arrival, the sound of gunfire erupted.

Some Iraqi troops had come under fire, but as soon as they returned fire, the enemy took off into the woods, Jensen later said.

A U.S. helicopter flying overhead saw the shooters throw their weapons into the woods, and U.S. troops later recovered two AK-47s, but the shooters escaped, he said.

Initially, the Iraqis found nothing, but Jensen encouraged them to keep looking, telling the ranking Iraqi officer to make sure that his men checked all of a series of holes in the ground used for irrigation.

Jensen then left the Iraqis to conduct the search by themselves.

About two hours later, the Iraqis moved to another location, and bursts of gunfire and an explosion could be heard.

Jensen learned that Iraqi troops came under machine-gun and rocket-propelled grenade fire. After the Iraqi troops shot back, the shooters again disappeared.

Eventually, the Iraqi troops found a man in a house that was allegedly used to fire upon them, Jensen said. They arrested the man after finding two AK-47s in the home and learning he been in a coalition prison for two years.

Jensen repeatedly insisted that the Iraqis take a picture of the man in the home with the weapons as evidence for later proceedings. The man was taken to the Iraqi troops&#8217; headquarters for questioning, he said.