A soldier models a jacket that converts into a backpack at Korean Fashion Week last month. Fourteen U.S. soldiers made a splash at the fashion show strutting the catwalk in clothes by South Korean designer Kim Kyu-sik. (Courtesy of U.S. Army)

A soldier models a jacket that converts into a backpack at Korean Fashion Week last month. Fourteen U.S. soldiers made a splash at the fashion show strutting the catwalk in clothes by South Korean designer Kim Kyu-sik. (Courtesy of U.S. Army) 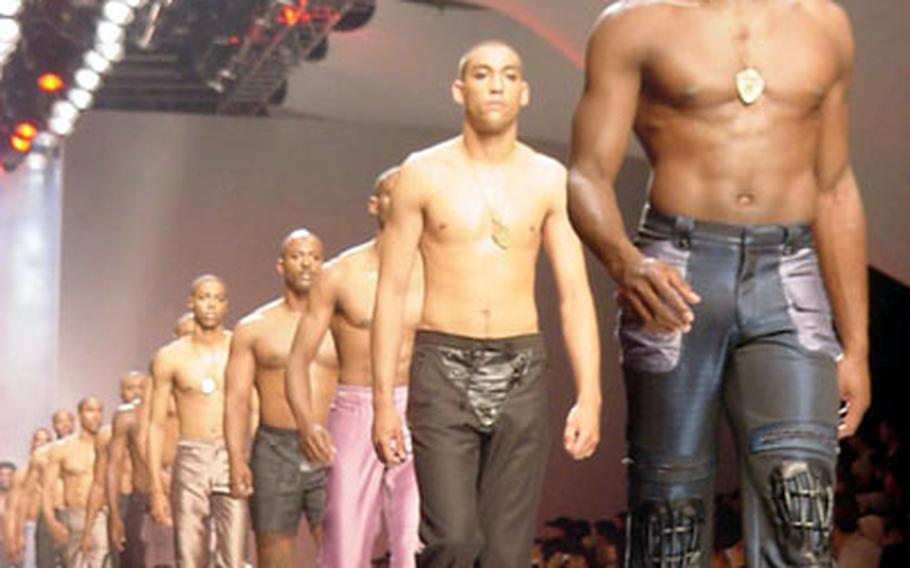 CAMP JACKSON, South Korea &#8212; They strutted and posed in skin-tight outfits designed to stun the glitterati of the South Korean fashion world without violating the Army&#8217;s rules for clothing worn by off-duty soldiers.

Fourteen U.S. soldiers made a splash at Korean Fashion Week last month modeling creations by hot new South Korean designer Kim Kyu-sik. The soldiers were so popular that their services are in demand for the next major Korean fashion event in April, said soldier/model Sgt. Charles Gray of the 8th Army Noncommissioned Officer Academy in Uijongbu.

About 30,000 buyers, journalists and members of the public visited last month&#8217;s event at the Seoul Trade Exhibition Center, organizers said.

Gray, 32, of Pennsylvania, recruited fellow soldiers to walk the runway with him after a South Korean modeling agency approached him in search of black male models for the Fashion Week show, he said.

The tall, high cheekboned soldier studied the art at his previous duty station, Fort Jackson, S.C., and signed with the prestigious Millie Lewis modeling agency before getting orders for South Korea, he said.

Soon after he arrived in South Korea, he contacted several modeling agencies in Seoul in an effort to build up his portfolio. One agency, it turned out, wanted not just Gray but several black male models for Korean Fashion Week, he said.

&#8220;I started telling soldiers around post that this fashion show was coming up, but I didn&#8217;t want to make it too public. I didn&#8217;t just want anybody to come out. I looked for complexion, confidence and high cheekbones. I was looking for not just the look but outward confidence and mature and disciplined soldiers,&#8221; Gray said.

Eventually he chose six soldiers from Camp Jackson and others from Camp Casey, Camp Stanley, Camp Red Cloud and Yongsan Garrison for the show. Most had no modeling experience, but Gray said their Army training prepared them well for the work.

&#8220;Military marching is the perfect training for runway modeling. On the runway, male models need to have good posture and look relaxed and natural with no excessive arm movement. The walk has to be in rhythm but look as natural as possible. The shoulders should be level and you don&#8217;t want a hop in your step. It is like marching but without the stiffness,&#8221; he said.

Male models should project confidence but not arrogance when posing, he said.

&#8220;Some people say you have to be arrogant. I don&#8217;t want to be like that but I try to look like I am taking care of business or on a mission,&#8221; said Gray, who practiced posing at modeling school by standing in front of a mirror and attempting to convey various emotions.

The comedy about male models was not an accurate portrayal of the world of high fashion, Gray said.

However, there is plenty of drama involved in male modeling.

When the soldiers arrived at rehearsal for Korean Fashion Week, they discovered their first ensemble was made up of bikini briefs with a jacket and no trousers, said Gray, who immediately recognized that the outfit contravened the U.S. Army&#8217;s rules for soldiers&#8217; off-duty attire.

After a long argument, during which the designer complained of headaches and asked to speak to the soldiers&#8217; commander, a compromise of boxer shorts was reached.

&#8220;It was difficult because he (Kim) is not used to dealing with people who he has to compromise with,&#8221; Gray explained.

In one part of the show the soldiers modeled pants without shirts or shoes, he said. It is easy for soldiers to look good with their shirts off because they exercise regularly as part of their jobs, he said.

Skin care can be a problem for some soldiers who spend long hours working in dirty conditions in the field, but Gray said his complexion stays clear if he remembers to wash his face each day.

Many of the soldiers got their first taste of modeling at the fashion show, he said.

One of the Camp Jackson soldiers who participated in the fashion show, Pfc. Dequincy Francis, 20, of St. Martinville, La., said it was his first modeling experience.

It felt strange wearing only a jacket and boxer shorts, but Francis said he enjoyed strutting the catwalk without a shirt on. He also enjoyed modeling a jacket that could convert into a backpack, he said.

Korean Augmentee to the U.S. Army Sgt. Song Won Ik, 25, of Pusan, who liaised between Gray and the South Korean model agencies, said Korean Fashion Week was the first time black male models had walked the catwalk in South Korea.

&#8220;I see a lot of possibilities for U.S. soldiers to be involved in the Korean fashion industry. They already mentioned that they want them for the next Seoul Collection, which is in April,&#8221; he said.

Soldiers&#8217; participation in the event would strengthen the U.S.-South Korean alliance, he said.