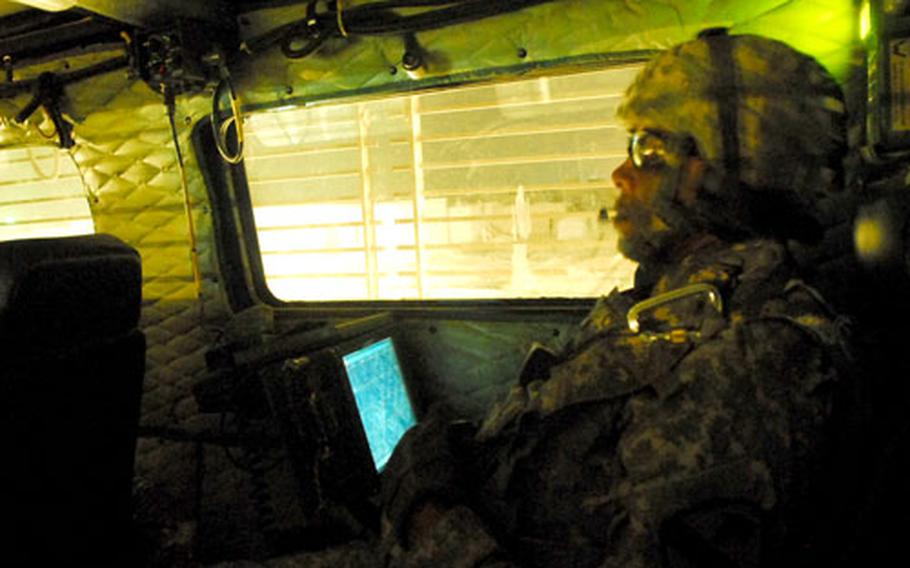 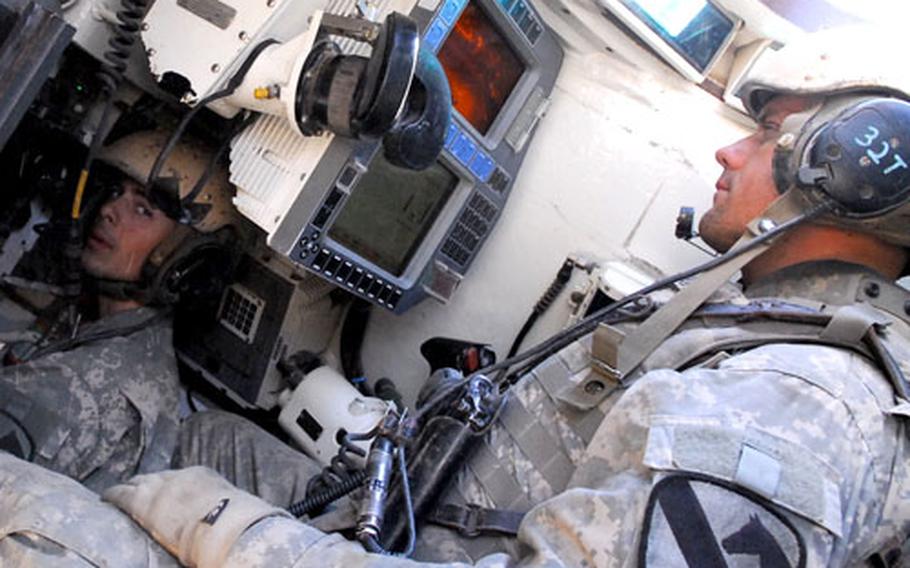 Spc. Jacob Chilcoat, 22, of Baltimore (left), the gunner on an Abrams tank, talks to tank commander Sgt. John Lear, 31, of Fort Meyers, Fla., as their tank rolls through Baghdad. The stretch of road they travel is perhaps the most heavily EFP-laden route in Iraq&#39;s capitol, if not the country. (Monte Morin / S&S) 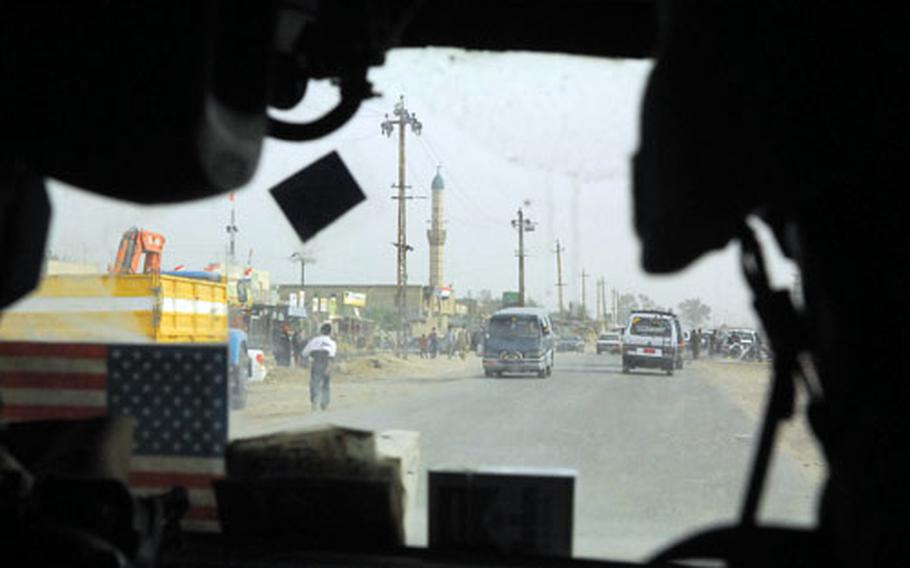 Soldiers in a Humvee drive along a road in northern New Baghdad recently. (Monte Morin / S&S) 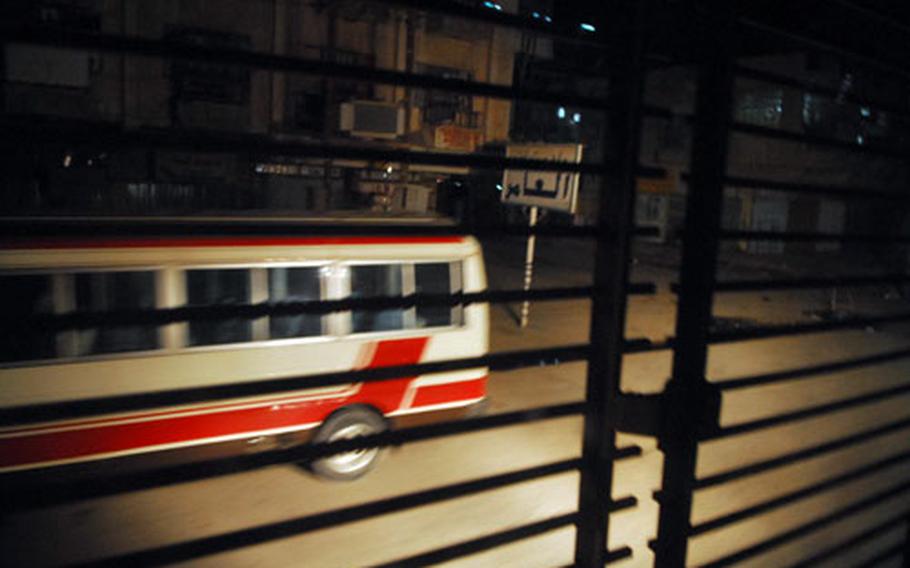 A spotlight from a Buffalo mine clearing vehicle sweeps over the road during a route clearance mission in New Baghdad. (Monte Morin / S&S)

BAGHDAD &#8212; It&#8217;s a ragged stretch of road soldiers call Route Predators, and for those who drive it on a regular basis, this New Baghdad boulevard is three miles of gut-clenching dread.

Littered with mountains of rusting scrap metal, rubber tires and shabby, cinder-block buildings, this section of Iraq&#8217;s Highway 5 carries the dubious reputation of being the most EFP-laden path in east Baghdad, if not all of Iraq.

EFPs, or explosively formed projectiles, are a particularly deadly brand of armor-piercing roadside bomb used by Shiite militias like the Madhi Army. The explosives, which U.S. commanders say are manufactured in Iran and smuggled into Iraq, are the size and shape of coffee cans but can destroy Humvees and Bradley fighting vehicles in a single, ear-splitting blast.

&#8220;When one of those things goes off in your direction it sounds like wrath of God,&#8221; a soldier yelled as his blacked-out Humvee hurtled down the thoroughfare one recent night.

He and other soldiers rode with their mouths open &#8212; to equalize the pressure on their eardrums should a blast occur &#8212; and tensed every muscle as they roared past piles of debris that might conceal an EFP.

The primary component of the EFP is a precision-manufactured copper disc shaped like a dinner plate. When the device explodes, the disc forms itself into a fist-sized slug that punches through the 500-pound door of a Humvee. The bombs have killed at least 172 soldiers nationwide since mid-2004, according to the U.S. military.

The road falls within the 9 Nissan security district, and is the main supply route for at least two newly established combat outposts. The outposts are the primary weapon in the newly launched Baghdad security plan.

During the first month and a half of the plan, which started mid-February, soldiers with the 1st Battalion, 8th Cavalry Regiment, 1st Cavalry Division enjoyed an unprecedented calm. But when militia leader Muqtada al-Sadr renounced his call to lay down arms several weeks ago, soldiers here experienced a spike in attacks.

&#8220;Mookie&#8217;s boys are back in town, so we&#8217;ve been getting hit a lot,&#8221; said 1st Lt. Barry Couture, 24, of Pelham, N.H. Couture&#8217;s Humvee was hit by an EFP less than two weeks ago. The projectile ripped through the trunk of the vehicle, tore off the spare tire and buried itself in a cement wall. While nobody was hurt, the force of the blast flattened all four tires and cracked two windows.

About the only vehicle that soldiers feel completely safe in is the 70-ton Abrams tank.

The worst EFP incident to hit the unit occurred on March 15, when six soldiers were killed by a roadside bomb ambush on another route. The troops, like the rest of the battalion, were attached to the 2nd Brigade Combat Team, 2nd Infantry Division.

It was some consolation that soldiers recently captured the men suspected of planting the bombs.

First Lt. Lonnie J. Harper, 24, of McKenzie, Tenn., a patrol leader for 2nd Platoon, Company A, was part of the operation that scooped up the cell. For all their deadly work, Harper was shocked at the suspects&#8217; reaction.

The task of clearing roadside bombs belongs to the engineers of Company E. On an almost nightly basis, they roll through the streets of 9 Nissan in a variety of specialty mine-clearing vehicles searching for roadside bombs. More often than not, soldiers say, the explosives find them first.

Hours before daybreak Saturday, the platoon sergeant sat in a high-wheeled Buffalo &#8212; a mine-clearing vehicle of South African design with a V-shaped hull and a hydraulic arm.

Unlike roadside bombs that are buried deep underground, EFPs can be placed very quickly along the roadside and detonated by a triggerman.

As luck would have it, they did not encounter any roadside bombs that morning. Soldiers expressed a mix of relief and disappointment over the dry run.

But commanders said the engineers&#8217; work was deeply appreciated by the battalion.