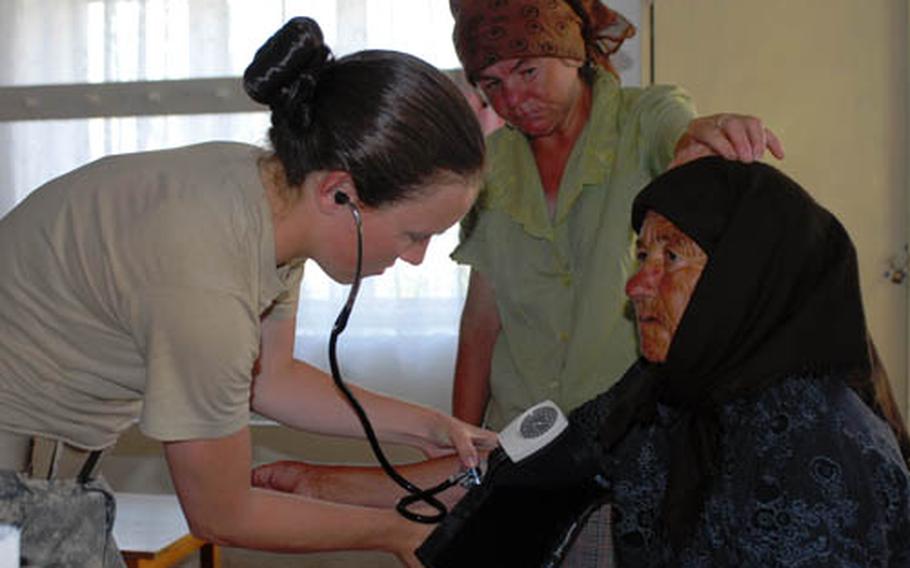 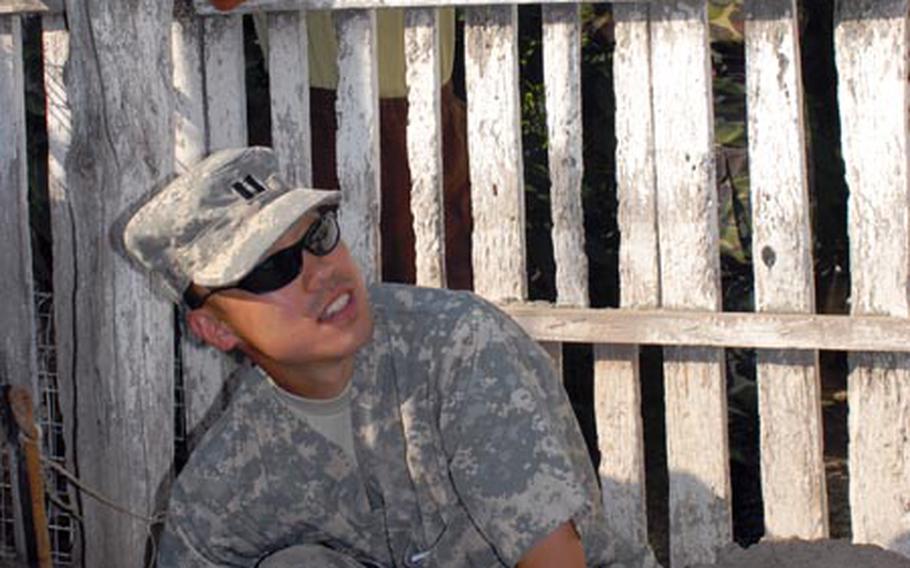 They are part of a Humanitarian Civil Assistance team, including Romanian medical personnel, vision specialists, dentists and veterinarians, that is nearing the end of a six-week mission to Romania. Their services are in conjunction with this year&#8217;s Joint Task Force East rotation.

JTF East involves the deployment of 900 U.S. personnel to Romania and Bulgaria to train over the summer.

Capt. Robert Dennis, who is deployed to Romania as an intensive care nurse with the 212th Combat Surgical Hospital, said the assistance team visits four villages each week and sees between 65 and 80 patients in each village.

The 34-year-old Philadelphia native said most villages don&#8217;t have a doctor and residents must go to a larger town for care. For specialized care, villagers must go to a big city such as Tulcea, Bucharest or Constanta, he said.

"Many of the roads are dirt tracks so they can&#8217;t get to the larger cities unless they have a functioning mule," he added.

Some elderly villagers may not have seen a doctor for five years, Dennis said.

"I&#8217;m amazed at how resilient they are. These people look tough and they are tough," he said.

The most common ailments that the U.S. personnel treat, such as tooth decay or vision problems, are caused by the lack of health care, he said.

Last Wednesday the assistance team visited Babadag, a small town near Babadag Training Area, which is where U.S. forces are training alongside soldiers from the Romanian Army&#8217;s 21st Mountain Battalion.

Villagers lined up in the blazing sun outside a makeshift clinic. Some brought gifts such as apples or coffee for the team.

Sgt. Whitney Knowles, 23, of Whitehall, Pa., a medic, said the team has been well-received at every village.

"Every morning we show up and there are people there to see us. They wave to us as we drive into town," she said after checking an elderly woman&#8217;s blood pressure.

Lt. Col. Lucia Fitarau, a Romanian Army doctor with the team, said she&#8217;d done similar work in Iraq in 2004 but added that it is easier for her to work in her own country.

Sgt. Jonathan Ivie, of the Heidelberg Medical Command in Germany, checked villagers&#8217; eyes at the clinic.

"The older generation doesn&#8217;t have the best vision," said the 32-year-old Lapasas, Texas, native as he stood in a room containing hundreds of pairs of glasses that the team hands out free to people who need them.

Lt. Col. Dexel Peters, who also checked villagers&#8217; vision, said some old women bring in sewing equipment to see if they can thread a needle once they receive the glasses.

While the medical personnel treated people at the clinic, the veterinarians walked the streets of Babadag in search of patients.

Capt. Reid Katagihara, 28, a veterinarian who came to Romania from the South Atlantic District Veterinary Command at Parris Island, S.C., said villagers bring him dogs, horses, goats and sheep for vaccinations and de-worming.

"The sheep we saw yesterday had mastitis &#8212; inflammation of the udders. The sheep owner didn&#8217;t know that the infection can be passed on through his hands," he said.

At the home of Babadag&#8217;s Orthodox Christian priest, Katagihara checked on the health of two dogs named Cocuta and Vasilica. Cocuta was healthy but Vasilica, possibly suffering from cancer, looked like her days might be numbered, said the Pearl City, Hawaii, native.

The priest, Marc Georgica Pencu, said people in Babadag welcome the Americans and hope their presence will lead to better roads, buildings and airfields in the area.