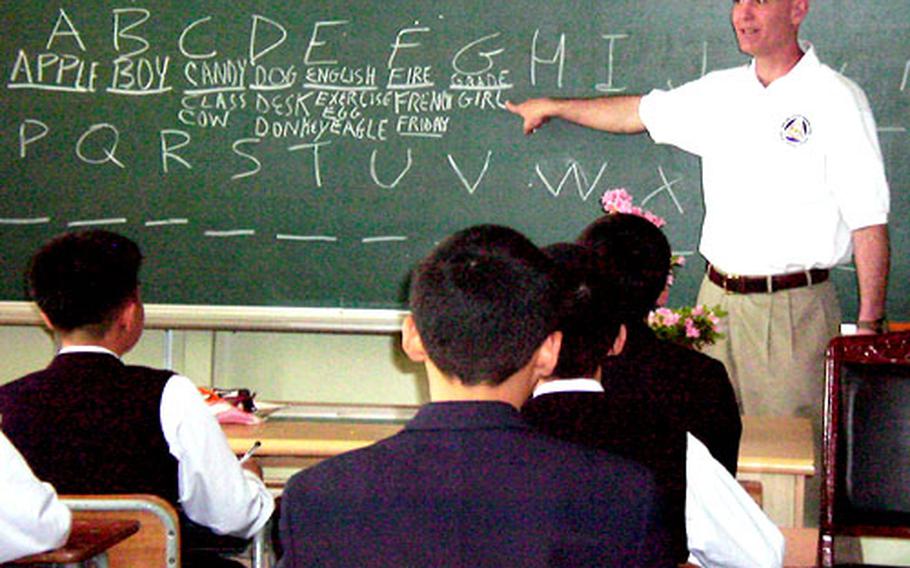 Army Lt. Col. Conrad Munster goes over the alphabet during a recent Saturday afternoon English class at Kyongsan Boys Middle School in South Korea. Munster is a member of 19th Theater Support Command in Taegu, which has “adopted” the school as part of a U.S. military drive to forge good relations between U.S. forces and the South Korean public. (Photo courtesy of U.S. Army)

Surely, class members would want to ask about the war in Iraq or the roadside accident last June in which a U.S. armored vehicle struck and killed two South Korean schoolgirls, leading to months of sometimes violent anti-U.S. protests in South Korea.

But the soldiers who kicked off a new adopt-a-school English program with a local boys middle school met only smiles, friendly curiosity and questions about the United States.

Army Master Sgt. Allerick Knight of Headquarters and Headquarters Company, 19th Theater Support Command, said he expected thorny questions. But when discussing the visit in the van on the way back to base, the soldiers realized that &#8220;the roadside accident, Iraq &#8212; none of that stuff came up.&#8221;

Knight&#8217;s company formally &#8220;adopted&#8221; the Kyongsan Boys Middle School in Kyongsan City, outside Taegu. &#8220;We talked about the United States and talked about the places that they like in America, and where they were on the map,&#8221; he said. &#8220;And of course, New York and Disney World were the favorites.

Each week, HHC will send soldier volunteers to teach the boys basic English as a backup to the school&#8217;s regular instruction in the language. The arrangement is part of a Korea-wide public relations drive launched recently by U.S. Forces Korea.

Called the Good Neighbor Program, it aims to win friends for American armed forces amid South Korean opponents&#8217; increasingly sharp criticism of the U.S. military presence there. Their wave of anti-U.S. protests climaxed during the December presidential campaign, then diminished during recent tension over North Korea&#8217;s nuclear aspirations.

&#8220;It&#8217;s a method to strengthen the ROK-U.S. alliance through increased positive engagement with our Republic of Korea hosts, through a series of programs,&#8221; said Mutter.

The 19th TSC eventually hopes to have its subordinate units forge links to at least five additional schools, he added.

Meanwhile, soldiers from HHC will teach from 1:30 to 3:30 p.m. at Kyongsan each Saturday throughout the school year.

At their first session, on a sunny April 12, 13 HHC volunteers divided themselves among five classrooms, each with about 15 students.

&#8220;We tried to come up with an assessment of where our students were,&#8221; Knight said. &#8220;We did some conversation, greetings, some understanding of the alphabet, the numbers, days in the week, months in the year, just common English words. That would give us an idea of exactly where a student stands.&#8221;

Bae Jeong-woo, 15, an eighth-grader, speaks little English but said he liked the Americans and welcomed the chance to enhance his vocabulary.