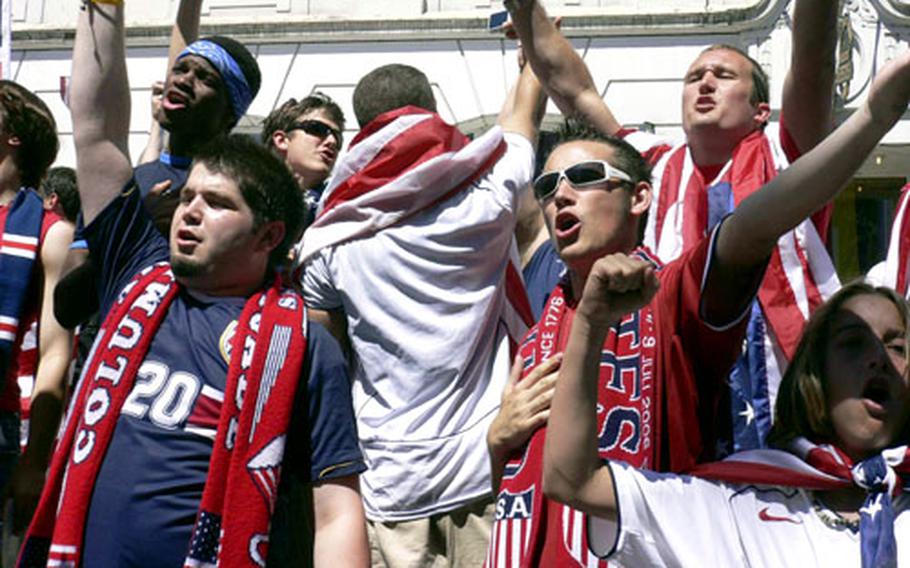 Aaron Silverman, left, a contract worker in Kuwait, and Roger Decker, a new enlistee in the Navy who will report for basic training at the end of July, show the spirit of solidarity Monday among U.S. soccer fans at the World Cup: The two just met earlier in the day. (Ben Murray / S&S) Jason Graham, left, and Sara Rushing take a break from the revelry Monday in Gelsenkirchen, Germany, where the heat was melting Graham&#39;s face paint. "I&#39;m going to have to re-apply here in the next hour or so," Graham said. (Ben Murray / S&S)

GELSENKIRCHEN, Germany &#8212; Anyone still harboring the notion that soccer fanaticism of the highest order is not an American pastime couldn&#8217;t have been in screaming range of Gelsenkirchen, where the U.S. soccer team played its opening match of the 2006 World Cup on Monday.

Gathered there in the thousands, wearing the American flag in any way they could fasten, pin or paint it on themselves, were great hordes of vocal U.S. soccer fans reveling in the electric atmosphere of the planet&#8217;s biggest sporting event.

So feverish were the U.S. fans that they commandeered a marble pavilion in the game&#8217;s host city, where a man in a star-spangled Mexican wrestling mask led the pledge of allegiance for a crowd of Elvis impersonators, Uncle Sam look-alikes and a team of men dressed as the Harlem Globetrotters.

For many in Germany this summer, this kind of scene will make up the heart of the World Cup experience &#8212; a woozy mix of warm beer and amplified patriotism exhibited at the gates of a major stadium.

But for the lucky ones with tickets, the pre-game pep rally is just a precursor for the screaming match to come.

In Gelsenkirchen, the buildup began well before the match, with fans from both teams migrating by streetcar to the stadium hours early to make sure they got to the stands on time.

Once there, access to the stadium was fast and simple. Fans simply scanned their tickets through a machine, then walked in unmolested.

Security at the stadium was stringent, however, with comprehensive pat-down checks before entry.

Inside the stadium, there was an air of almost palpable optimism, exhibited by folks like Bill Fetty, a U.S. soccer fan so dedicated to the team that he booked a flight and hotel for Germany before he even had a ticket, planning to come regardless of whether he could get in.

Luckily, Fetty made it through the lottery and got tickets with some fellow members of Sam&#8217;s Army, a vociferous unofficial fan club whose members follow the team with almost cult-like fervor.

Bolstered by men like Fetty and his fellow Army members, U.S. fans put up a fight against the louder and more numerous Czech Republic supporters, who often tried to drown out &#8220;U-S-A&#8221; chants with waves of piercing whistles.

But it was the Czech contingent that had more reason to cheer Monday, as their team plunked in three goals against a lackluster, and at times, disorganized squad from the U.S.

Even so, the outcome for many was secondary for many fans to the simple act of being immersed in the bedlam of a World Cup game.