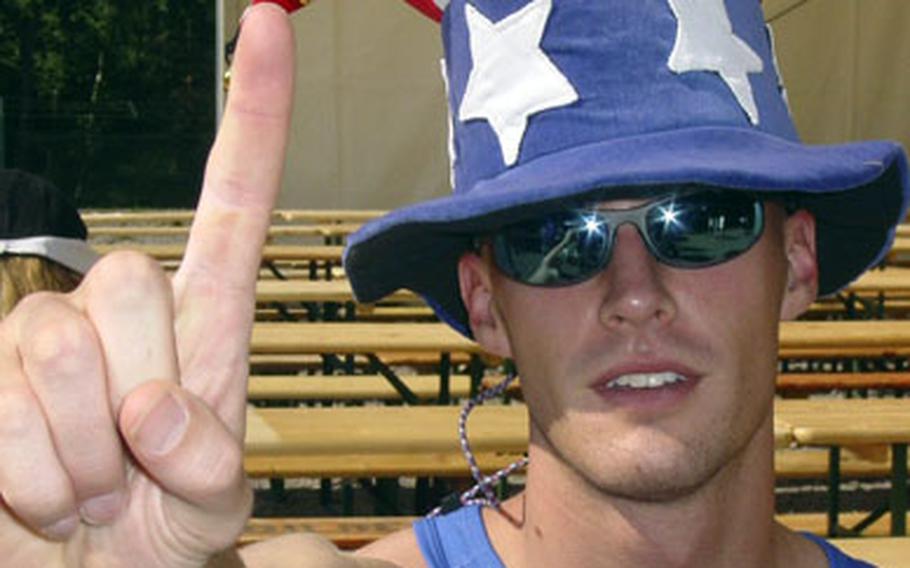 Air Force Lt. Casey Aakhus Witt, who is attached to the 24th Intelligence Squadron at Ramstein Air Base, poses with his U.S. soccer hat hours before the U.S.-Italy match on Saturday. (Scott Schonauer / S&S)

Air Force Lt. Casey Aakhus Witt, who is attached to the 24th Intelligence Squadron at Ramstein Air Base, poses with his U.S. soccer hat hours before the U.S.-Italy match on Saturday. (Scott Schonauer / S&S) 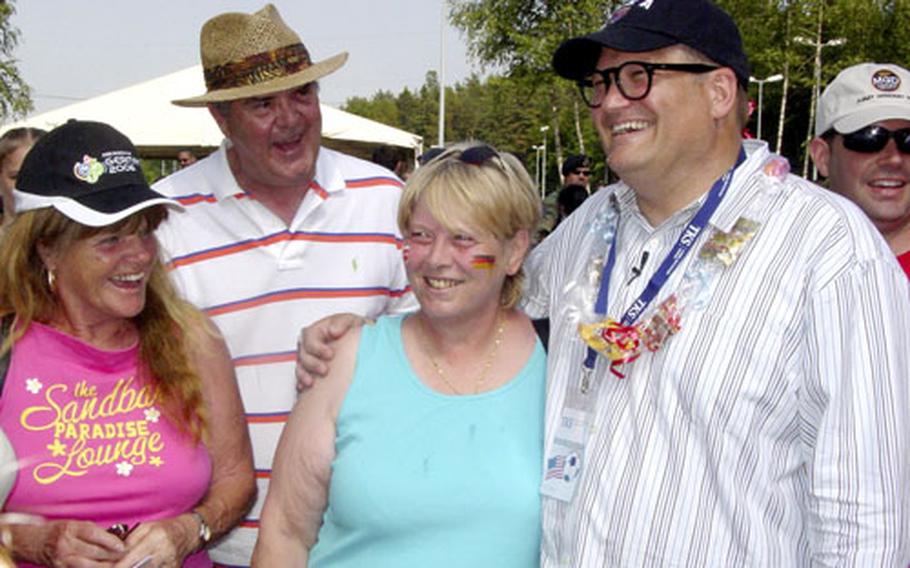 Comedian and actor Drew Carey, right, poses with fans at the World Cup Fest at Pulaski Barraks in Kaiserslautern, Germany, before the U.S.-Italy World Cup soccer match on Saturday. Carey made a surprise visit to the park with fellow comedian Greg Proops. Carey is following the U.S. team for a show on the Travel Channel. (Scott Schonauer / S&S) 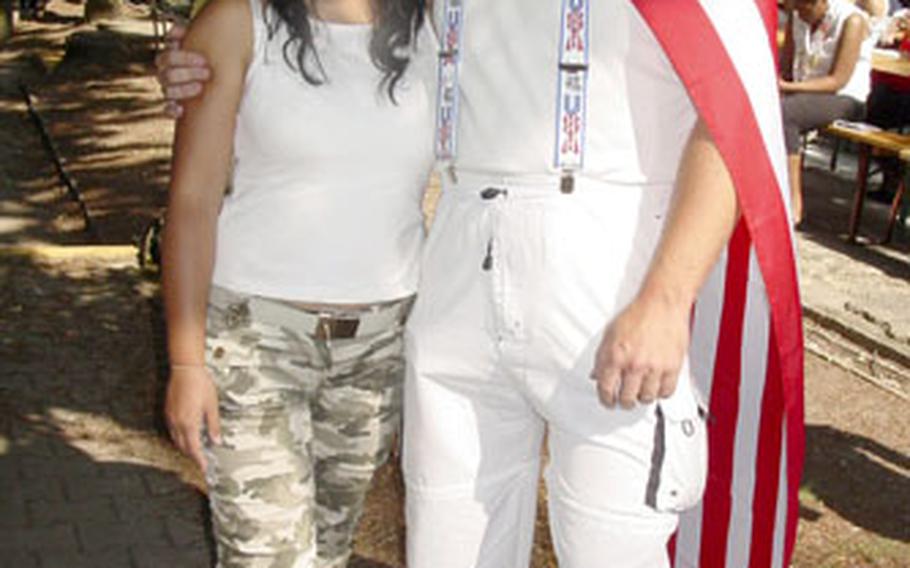 Alex Heinrich, a German national who works for the U.S. military as a civilian firefighter, poses with his wife, Wei Zhou, during the World Cup Soccer Fest at Pulaski Park in Kaiserslautern, Germany. (Scott Schonauer / S&S)

Thousands of Americans stationed in the Kaiserslautern area came out in force Saturday to root for the U.S. national team in its crucial World Cup game against Italy.

Kaiserslautern might be the smallest city to host World Cup games in Germany this year, but it is the largest U.S. military community outside the United States, and both Germans and Americans here have been anxiously looking forward to the game since it was placed on the schedule.

Those who weren&#8217;t able to score tickets planned to watch the night game in bars downtown or on a jumbo outdoor TV screen at Pulaski Barracks, an Army base only a few miles west of the city&#8217;s stadium.

Saturday&#8217;s game was critical for the U.S. squad. It lost 3-0 on Monday to the Czech Republic, and the team needed a win against a tough, defensive Italian team if it wanted to advance to the next round.

The U.S. soccer team stayed at Ramstein Air Base Thursday and Friday night and was greeted by several hundred flag- and banner-waving fans at the base. The team elected to stay at the U.S. base for safety reasons.

Many soccer experts looked at the match as a home game for the U.S. team due to the roughly 50,000 Americans stationed at bases scattered throughout the area and only a short drive to downtown.

Although many Americans traveled downtown to watch the action on TV screens in bars and outdoor viewing area, as many as 4,000 people were expected to attend the World Cup Fest at the base park. The festivities started at 1 p.m. and were to last well past the end of the game. Bands performed leading up to game time.

Late Saturday afternoon, the crowd was predominantly families who didn&#8217;t want to fight the traffic and deal with the parking downtown. The Army and the Air Force, along with a group of private companies, sponsored the event.

Among the crowd was actor and comedian Drew Carey, who made a surprise visit to the park with fellow comedian Greg Proops. Carey is following the U.S. team for a show on the Travel Channel.

The American party also attracted as many as 45 media representatives from across the globe, including ESPN. A British TV team planned to do a live shot from the fest as part of its World Cup coverage.