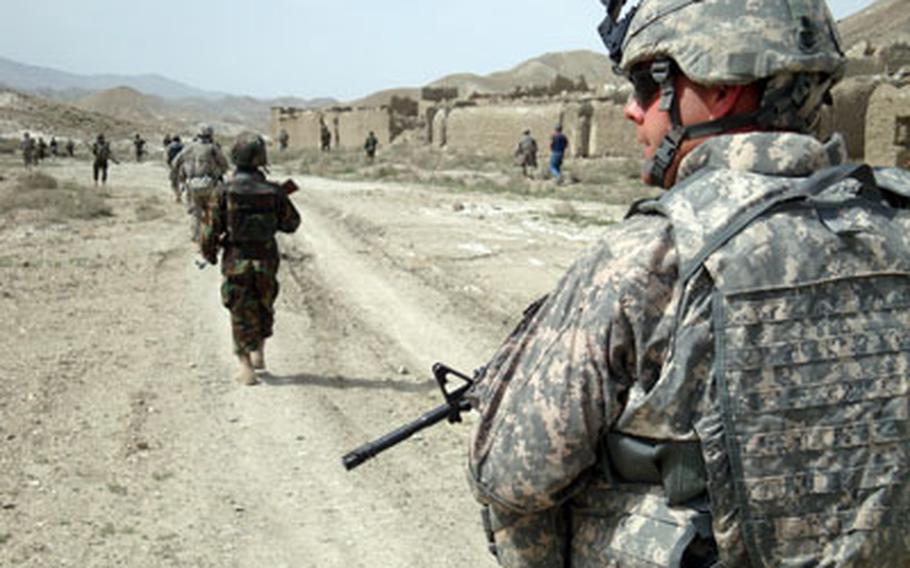 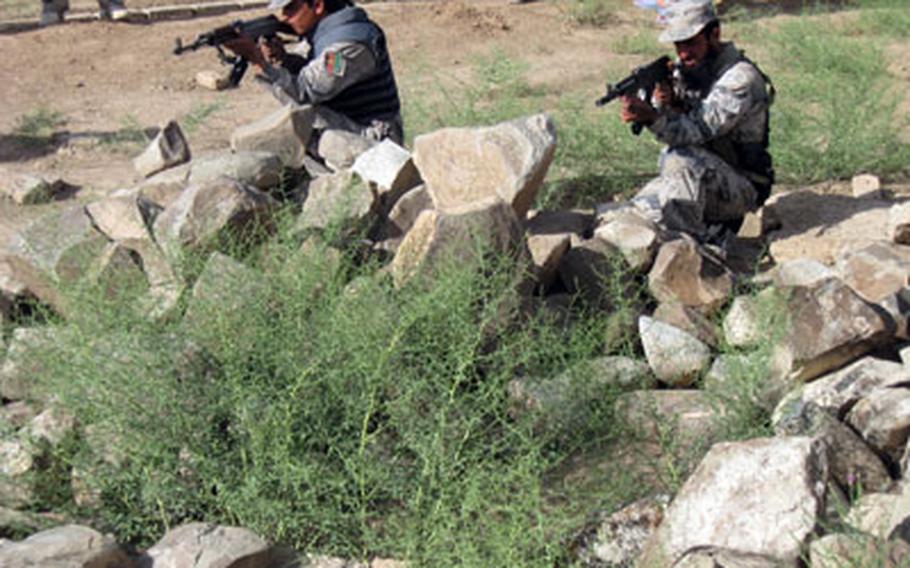 Afghan Border Police with the 7th kandak (battalion) learn some basic tactical skills in June from U.S. trainers in Waza Kwah at the ABP Headquarters. () 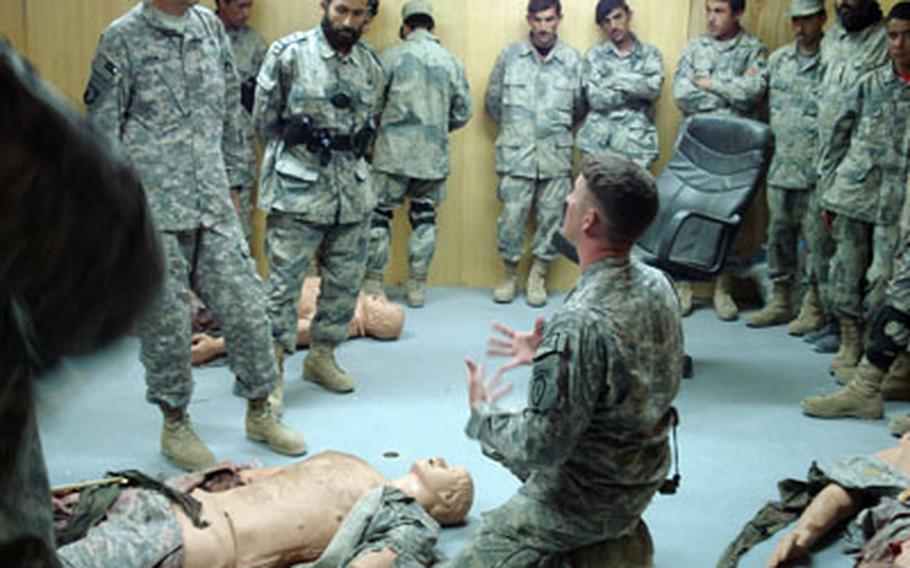 FORWARD OPERATING BASE GARDEZ, Afghanistan &#8212; By December, U.S. forces in southeast Afghanistan will make good on a promise to increase the number of troops training Afghan Border Police, nearly a year after launching an overhaul of the program.

In January, U.S. officials vowed to boost forces in response to the continued violence along Afghanistan&#8217;s rugged 1,600-mile boundary with Pakistan.

It&#8217;s part of a comprehensive strategy to eliminate the threat of Islamist militants crossing the border from Pakistan, where they have found safe haven and financial support for years. The U.S. has used missile strikes to hit militant groups in Pakistan, and the Senate on Sept. 24 approved $7.5 billion &#8212; $1.5 billion a year for five years &#8212; in aid to Pakistan, largely to gain its support in fighting such groups.

For several years, the U.S. military relied primarily on small teams of embedded advisers to train the border Afghan security forces, but those teams have been in short supply. For example, in the southeastern region that includes the provinces of Paktia, Paktika and Khost, referred to as P2K, the allotted 16-man adviser teams rarely had more than six or seven soldiers, said Maj. Chris Thomas, operations officer for Task Force Warrior, 425th Brigade Special Troops Battalion under the International Security Assistance Force.

The war in Iraq also meant fewer troops were available for the training requirements in Afghanistan, said Capt. Adam Tumblin, an embedded mentor from 1st Brigade, 1st Infantry Division out of Fort Riley, Kansas, who has been in Afghanistan since November 2008.

"With the drawdown in Iraq, I think that now frees up forces to come here and partner with Afghans," Tumblin said. "It&#8217;s frustrating for me from a mentor&#8217;s viewpoint, but it&#8217;s not at my level to set policy."

Earlier this year, the U.S. Army brought in about 1,500 soldiers with the 425th battalion to strengthen the training program of border police in the region, from operational planners to intelligence personnel, logisticians and financiers.

While the exact number of these new trainers has yet to be determined, U.S. officials envision placing one U.S. soldier for every three Afghan Border Police officers. Afghanistan&#8217;s Ministry of Interior, which oversees the force, approved an Afghan Border Police force of 2,971 troops for the P2K region for 2009. The trainers advise Afghan police on how to run a five-week basic training course to include weapons training, first aid and literacy courses.

Building up the border police had to take a back seat to the U.S. military&#8217;s push to train and stand up the national army and national police forces to help bring stability to the country at large, military officials said.

Just as they saw with the army and national police, U.S. trainers are dealing with illiteracy, desertion, an undeveloped noncommissioned officer corps and the most pressing problem, corruption.

During a recent gathering at FOB Gardez of commanders for the seven kandaks, which is Dari for battalion, the issue of corruption provoked heated debate.

Afghan military leaders lie about the number of troops on their rosters to pocket nonexistent patrolmen&#8217;s salaries, and troops at border checkpoints take bribes to let travelers through, according to military training team officials.

One frustrated intelligence officer, Afghan Maj. Mazrat Din, complained that the Ministry of Interior has failed to push down cash to be used to pay sources for information. When a source recently led border police to 500 kilograms of hashish, Din had no money to pay for the tip. Instead, he rewarded the informant by doling out some of the spoils.