U.S. servicemembers pull for both sides as tug of warriors at Naha 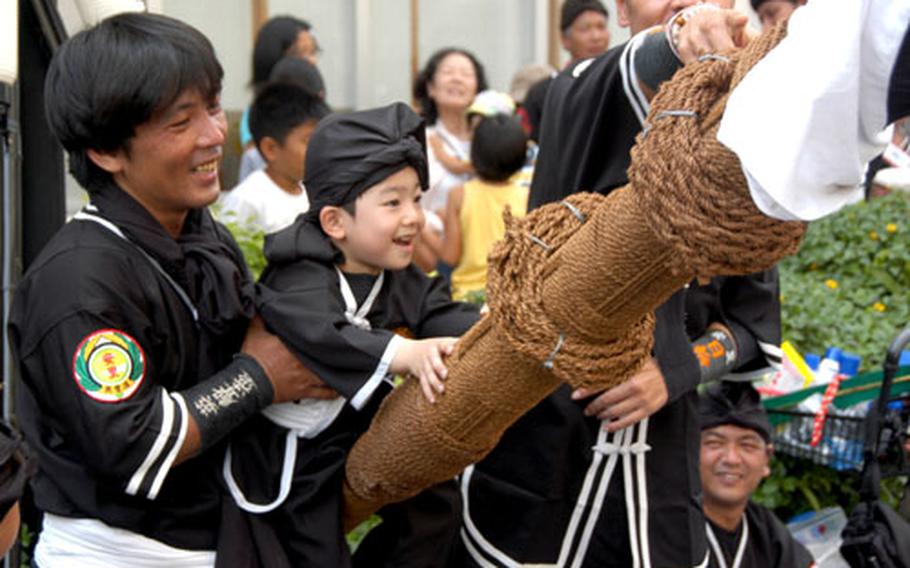 A boy bounces on a flagpole Sunday before a parade. Officials estimate 280,000 people attended the tug of war, heralded as the largest in the world. (Will Morris / S&S)

A boy bounces on a flagpole Sunday before a parade. Officials estimate 280,000 people attended the tug of war, heralded as the largest in the world. (Will Morris / S&S) Participants in the Naha Giant Tug of War pull an Okinawan-style flag, representing where they live. (Will Morris / S&S) 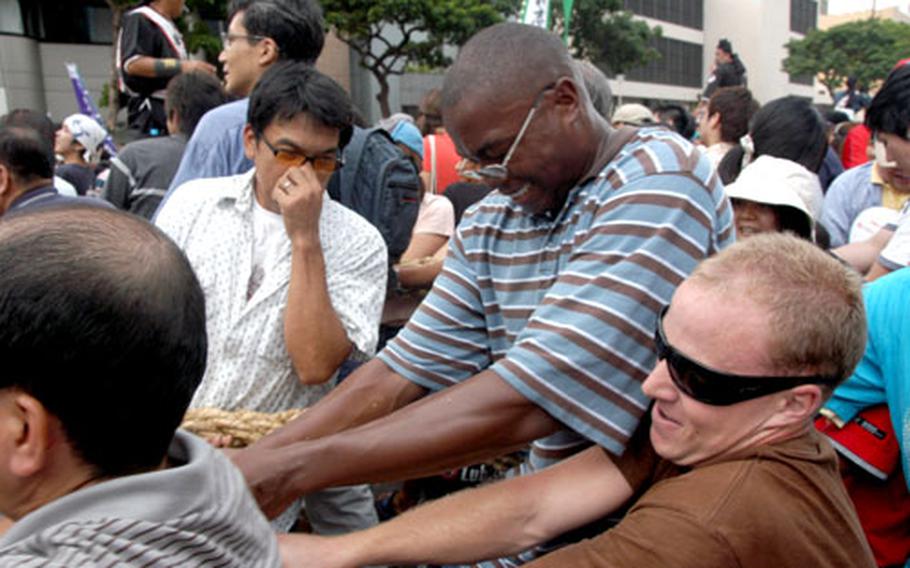 Two U.S. servicemembers pull for the east side of the island. (Will Morris / S&S) An Okinawan girl takes a short break during the Naha Great Tug of War on Sunday. (Will Morris / S&S) NAHA, Okinawa &#8212; Take thousands of high-spirited people, fill them full of high-fructose, high-starch Japanese carnival food, shove them in a two-block area, throw in a gigantic straw rope &#8212; and you&#8217;ve got yourself the world&#8217;s largest tug of war.

After being delayed for a week because of bad weather, the 37th Annual Naha Giant Tug of War &#8212; or O-tsunahiki in Japanese &#8212; kicked off Sunday without a hitch. Roughly 280,000 people showed up for the event, the highlight of a three-day celebration, originally intended to bring luck and prosperity to the island.

Marine Cpl. Kevin Spenla, 22, of Tempe, Ariz., showed up with at least five of his friends from his squadron, VMFA-314. He and his fellow Marines said they came out on Sunday to have fun and experience some Okinawan traditions.

Before the tug started, Spenla, fellow members of his squadron and 15,000 of their closest friends helped pull the two ropes together. The 300-feet-long, 21-ton ropes are joined in the middle by a wooden dowel &#8212; the Kanuchi pole &#8212; about the height of an average man. Each rope represents a side of the island, one for the east side of the island and the other for the west.

The massive ropes were constructed at the Army&#8217;s Naha port facility. It took the 24-man crew about six weeks to complete the rice straw ropes.

Col. Ken Lundgren, the commanding officer of the Army&#8217;s forces on Okinawa, said the tug is a good example of cooperation between the Okinawans and the U.S. military.

Lundgren also noted that for the first time, the military personnel were used to help with security. Seventy-five people from all four services, dressed in civilian clothes, helped guide the crowd. Lundgren said having U.S. servicemembers helping with crowd control made sense as a sizable portion of the crowd was military personnel.

The tug was a fight with the rope crawling slowly over the east&#8217;s side. Halfway into the pull, the team members on each side were dripping with sweat and showing fatigue. But then the rope moved east with a sudden jolt, accompanied by cheers and a sudden burst of energy. Fifteen minutes of pulling later, the east team won.

Then the knives came out, along with saws and other sharp objects &#8212; to cut pieces of the rope off and save them for good luck.

Ken Pickering, sergeant major of the 3rd Reconnaissance Battalion, said the event was great. He, his son and his wife tugged side by side.

Pickering, who was on the winning side, compared the tug to accomplishing a mission.