From left, Sgt. Darrell Richards and Tech. Sgt. Mario White, both from the 48th Security Forces Squadron, walk the streets of Newmarket with Suffolk County Constables Kevin Green and Dave Basham. The four were participating in a weekly joint patrol between the security forces at RAF Lakenheath and the Suffolk Constabulary. (Bryan Mitchell / S&S)

From left, Sgt. Darrell Richards and Tech. Sgt. Mario White, both from the 48th Security Forces Squadron, walk the streets of Newmarket with Suffolk County Constables Kevin Green and Dave Basham. The four were participating in a weekly joint patrol between the security forces at RAF Lakenheath and the Suffolk Constabulary. (Bryan Mitchell / S&S) 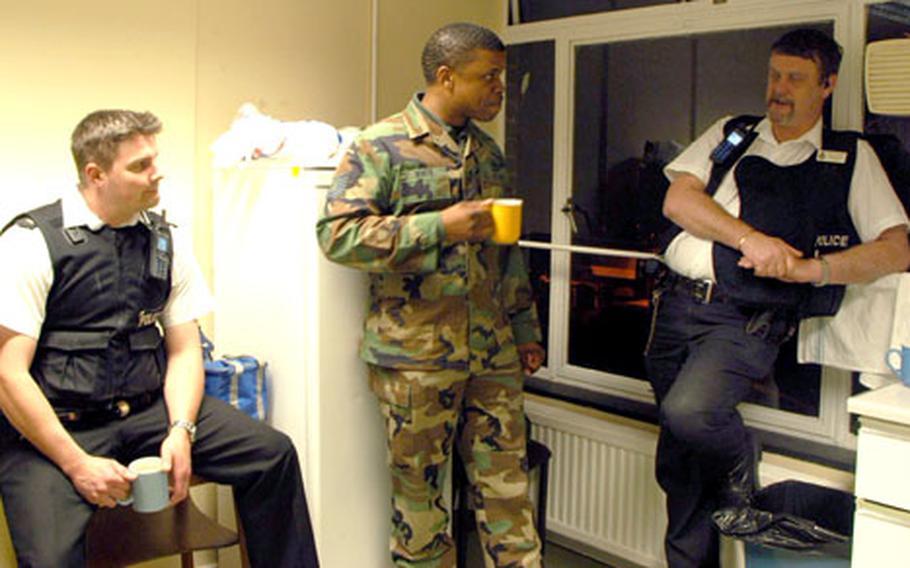 Basham, left, and White listen to Green while the three enjoy a cup of tea. “We’ve learned a lot about our surroundings, working with” the Suffolk police, White said. (Bryan Mitchell / S&S)

NEWMARKET &#8212; It was shortly before 11 on an unseasonably chilly May night as constables gathered in the station&#8217;s tiny break room for tea. Constable Sharon Coe readied the hot water machine and prepared a lineup of mugs, as well as sugar and milk.

On that Thursday night, Coe prepared a few more teas than normal. Two members of the 48th Security Forces Squadron joined the constables for their weekly joint patrol of the city.

Before they hit the streets, Tech. Sgt. Mario White and Sgt. Darrell Richards talked cop shop alongside their English counterparts while sipping Coe&#8217;s tea. They chatted about cases they worked recently, investigations both agencies pursued and a recent drug bust in nearby Bury St. Edmunds.

The joint patrol is not part of a larger campaign within the Air Force to link Security Forces personnel with host nation law enforcement officials. Nor is it a diplomatic gesture by a commanding officer who will never have to patrol the drunken streets of Newmarket at a quarter to 3 in the morning.

It&#8217;s more of a direct answer to a longstanding problem.

Airmen for years have flocked to Newmarket, most notably the 1,600-person capacity DeNiro&#8217;s nightclub. Suffolk Constable Kevin Green referred to the boxy, warehouse-style building as &#8220;the premier nightspot in East Anglia.&#8221;

Most nights, the majority of troops party responsibly and arrive home safe, but there have always been a handful who cause a bit of trouble.

&#8220;We had some folks who came down here and got into some altercations, fights and etcetera,&#8221; White said.

The constables would take airmen into custody for drunken behavior and fights. The Air Force would have to pick up the rest from there.

About two years ago, the Security Forces Squadron at RAF Lakenheath decided to become more proactive about the situation. It reached out to the Suffolk Constabulary and the joint patrol was born.

On that chilly May night, the team gathered at the Newmarket station for a short briefing on the day&#8217;s news and the night&#8217;s activities before officers left to patrol the Newmarket area of the county.

White and Richards teamed up with Green and Constable Dave Basham. The four sat out front of the relatively calm nightclub in a department van usually used to transport suspects.

Women barely 20 years old in skimpy skirts and tank tops braved the 40 degree weather as they walked past the contingent of officers and airmen and toward the thumping club. Young men about the same age in groups of five and six filed into the club behind.

Normally, Thursday nights are bustling, but the weather&#8217;s chilly turn and sporadic rain kept the crowd at bay, so there was little the patrol needed to do. Instead, they took a walk along the horseracing town&#8217;s High Street.

Green, who has worked on the Suffolk Constabulary in Newmarket for more than two decades, and Basham, a father of four who also has longstanding ties to the area, shared the town&#8217;s storied history with the airmen as they strolled along the wide sidewalk past the shuttered jewelry shops, independent clothing retailers and news stands.

A few hours, several strolls around Newmarket and another pit stop for tea later, the men wrapped up their patrol and bid farewell before reuniting next week.