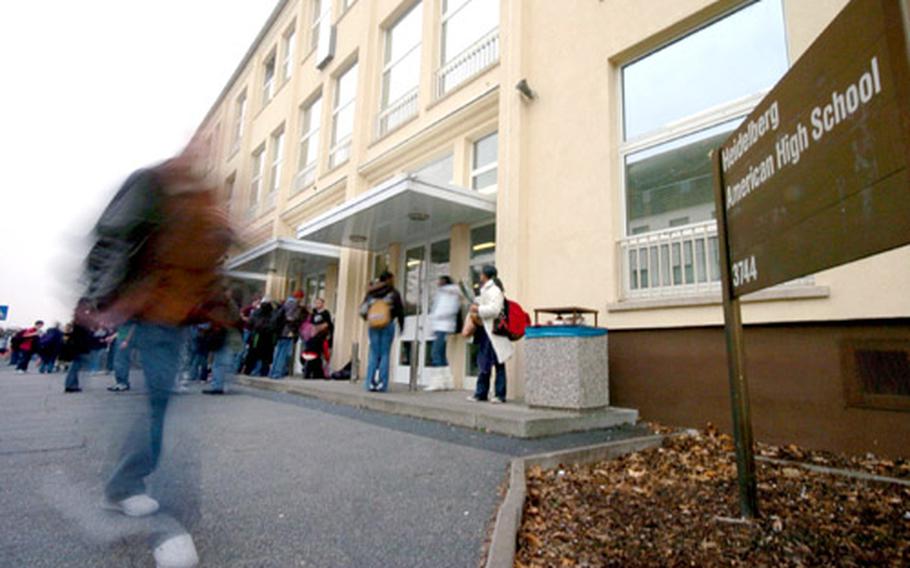 Students exit Heidelberg High School, Germany, after classes on Tuesday. The school was the site of a drug bust and controversial strip-search of some students on Friday. (Raymond T. Conway / S&S)

Then, in front of German and U.S. military police, the students had to take off their clothes. Some disrobed to their underwear, while a few had to strip naked.

Police were looking for drugs after having received several tips from students.

Although the search turned up a small amount of suspected marijuana, the incident last Friday has upset some parents and students and caught many school officials off-guard.

While strip-searching students is a contentious issue in the United States, it is legal in Germany.

Strip-searching students isn&#8217;t something Defense Department school administrators and teachers would do, but school officials acknowledged Tuesday that it can happen overseas in nations where it is legal.

Heidelberg High principal Allen Davenport said he didn&#8217;t know about last Friday&#8217;s raid until moments before police arrived with drug-sniffing dogs, and he didn&#8217;t find out about the strip-searches until after they happened. He said he would never strip-search a student, but admitted that he and others have no choice.

Davenport sent an e-mail to parents calling the search &#8220;an unusual one&#8221; but legal under German law. He said he has received e-mails both from parents who are furious that their sons or daughters were searched and from those who have no problem with it.

One parent, whose daughter was searched, said strip-searching goes too far.

Asked about the strip-searches, Heidelberg senior Jonathan Rose said, &#8220;It kinda bothered me, and seemed over-the-top and unnecessary. But on the other hand, the school needs to be able to counter drug use.&#8221;

Some German police are surprised that parents and students are upset. Harald Kurzer, a German police spokesman in Heidelberg, said strip-searches are common in drug cases because if suspects are going to hide drugs they often hide them in their underwear.

Kurzer said two of the three students arrested Friday hid the suspected marijuana in their underwear. If not for the strip-search, the police probably would have never found the illegal drug, he said.

Police found 8 to 10 grams of suspected marijuana on the students, who will face a German judge and have been suspended from school.

He said similar searches have been done in German schools.

It&#8217;s not routine, however, in most American schools. The American Civil Liberties Union has filed lawsuits, claiming strip-searches of students are unconstitutional.

Last year, federal judges in Michigan ruled that a strip-search of students at a Detroit high school was unconstitutional. The ACLU filed the lawsuit on behalf of eight students, according to the organization&#8217;s Web site.

However, Americans are subject to German law whether they are on a U.S. military base or not, due to agreements between the two countries.

While most cases involving U.S. servicemembers are handed over to the U.S. military, other Americans fall under the laws of the host nation, said Col. Michael Neveu, the judge advocate for U.S. Army Europe and 7th Army.

Given that German law allows strip-searches, members of the military community can be subject to such searches if the situation warrants.

The situation is similar in other countries. Italy retains the right to search U.S. bases, but U.S. forces also have an interest in maintaining and keeping good order and discipline within the installation, said Lt. Cmdr. Lisa Braun, spokeswoman for Navy Region Europe.

&#8220;While every case is different, major criminal investigations are coordinated between Italian and U.S. forces,&#8221; she said. &#8220;Under the [Status of Forces] agreement with Italy, there are no different rules regarding searches in schools.&#8221;

While Department of Defense Dependents Schools spokesman David Ruderman said DODDS does not strip-search students, school officials acknowledged that they have to go along with the local laws.