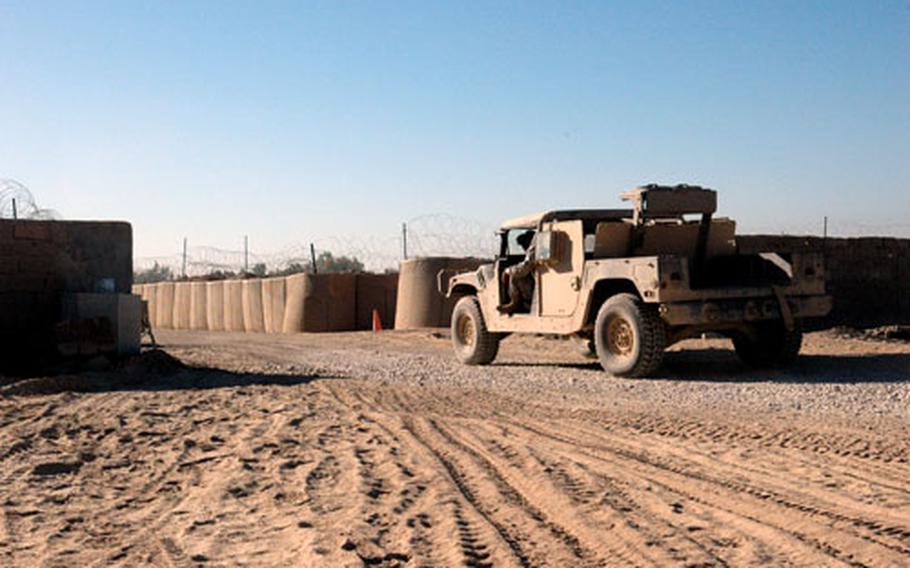 A truck rolls through the newly constructed gate that will serve as a main entry point for Camp Normandy. (Andrew Tilghman / S&S)

A truck rolls through the newly constructed gate that will serve as a main entry point for Camp Normandy. (Andrew Tilghman / S&S) Iraqi workers clear a patch of trees and brush to make room for renovations under way as Camp Normandy prepares to shrink in size and slash the number of U.S. troops stationed at the base. (Andrew Tilghman / S&S)

Editor&#8217;s Note: This is the first in a two-part series on base reductions in Iraq.

MUQDADIYAH, Iraq &#8212; Forward Operating Base Normandy is getting smaller.

A fortification wall built last week outlines the base&#8217;s new perimeter. Key supplies &#8212; such as Humvees and housing trailers &#8212; are moving out of the gate. And hundreds of soldiers may soon leave for good.

In the next few months, the U.S. Army plans to slash the number of troops here, which has been home to a battalion of roughly 700 troops for the past two years.

Only a fraction of those troops will stay behind, and the day-to-day responsibility for security will pass to the Iraqi Army battalion that shares the large base.

The reduction in troops is part of the U.S. Army&#8217;s changing presence in Diyala Province, a lush river valley about 50 miles northeast of Baghdad where a Shiite majority lives alongside Sunnis and Kurds in a demographic mix that mirrors the country as a whole.

Soldiers say they want to &#8220;reduce the footprint,&#8221; a phrase that summarizes plans to shrink the size of Army bases, cut the number of troops stationed here and scale back the presence of U.S. soldiers on the roads in the area.

FOB Normandy will be the latest in a string of bases turned over to Iraqi forces. Countrywide, U.S. troops have turned over 27 forward operating bases to Iraqi forces since February of 2005, according to a spokeswoman for Coalition Forces in Baghdad.

In Diyala, FOB Normandy will be the second base turned over to the Iraqi Army. In June, Camp Scunion, about 20 miles down the road toward Baghdad, was reduced from a battalion of nearly 800 troops to a core of about 100.

The reduction stems from several factors: Insurgent attacks are down; the Iraqi Army here has matured; and the U.S. Army may have greater need for soldiers elsewhere in Iraq, such as Ramadi and the embattled cities of the Euphrates River valley, soldiers said.

The Iraqi Army has nearly 1,000 troops in the battalion here. In recent months, they have taken the lead in many routine security duties and other operations. The battalion also operates a regional training center for their own troops and others from Diyala.

&#8220;The IA has the power to keep security in the area,&#8221; said Capt. Saddam Ismeal Abed. He pointed to the run-up to the Oct. 15 elections, when Iraqi Army troops helped fend off several nighttime attacks on polling sites without support from U.S. troops.

At the same time, however, they say they still need continued U.S. military support to control and suppress the enemy.

Cloutier said he hopes that fewer U.S. forces in the area will have a calming effect in the region, and the local forces may not face the same level of attacks as the Americans.