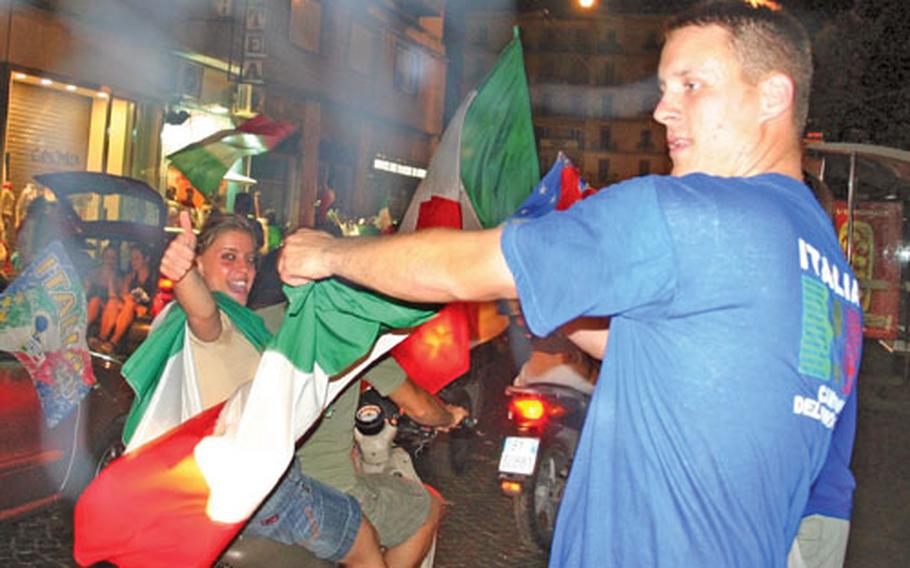 American sailor Shaun Knittel poses with an unidentified elderly Italian woman amid the chaos and pandemonium on the streets of Naples, Italy, on Sunday. (Sandra Jontz / S&S)

Some American sailors serving in Italy were swept up in the fervor that is football &#8212; and for some, living in the land that spawned the 2006 world champions has helped a simmering passion heat to a boil.

Chalk his new-fangled interest up to a month of constant televised coverage, sprinkled with the infectious pandemonium of zealot fans, and a realized appreciation for a sport that requires its players to be quick, nimble, and possess remarkable foot-eye-coordination.

A fan is born.

And his Sicilian wife of four years, Cristina, had little to do with the onset of Coogan&#8217;s new-found football fancy.

Soccer is going to be an acquired taste for some.

&#8220;Americans, in general, don&#8217;t really view soccer as a competitive sport,&#8221; said the corpsman, stationed at the Navy hospital at the support site base in Gricignano, near Naples. &#8220;But as Americans living overseas, we get a culturally diverse understanding of how important soccer is to [Europeans].

&#8220;When it comes to being a servicemember overseas, it really broadens your perspective of things outside the American culture.&#8221;

And after being part of the post-victory celebrations in downtown Naples on Sunday, she has accompanying bragging rights to having &#8220;been there, done that.&#8221;

When Fabio Grosso scored the fifth perfect penalty kick, cinching their fourth World Cup championship, Naples, like much of Italy, erupted with deafening jubilation that lasted hours and hours.

For one night, at least, many Americans here were tifosi (fans) for the green-white-and-red. &#8220;Now that America is out of it, we switched our colors pretty quickly,&#8221; joked Cmdr. Jeff Jackson, the executive officer of Naval Support Activity Naples.

Some sailors found immunity to the fever.

I have seen a lot of sailors who have been caught up in it, due to a lot of us coming from diverse backgrounds,&#8221; Sanchez said. &#8220;Growing up, they might not ever have had a chance to get this close to the crazed mania of the World Cup. I had neighbors running down the street with 12-foot flags last night; it was a spectacle that I won&#8217;t ever forget.&#8221;

The team, which defeated France Sunday in the 2006 World Cup finale, played in blue jerseys. If the flag has not a speck of blue in it, why are they called Azzurri?

According to a few Italians, and based on searches done on the Internet, the color is a carry-over from that the nation&#8217;s last ruling royal family, the Savoy.

Blue was the family color, and it has remained as a sort-of tradition, in spite of the creation of the republic on June 2, 1946, at the end of World War II.

Italy became a nation-state after the unification of the country in 1861, and was ruled by Victor Emmanuel II of the Savoy dynasty.