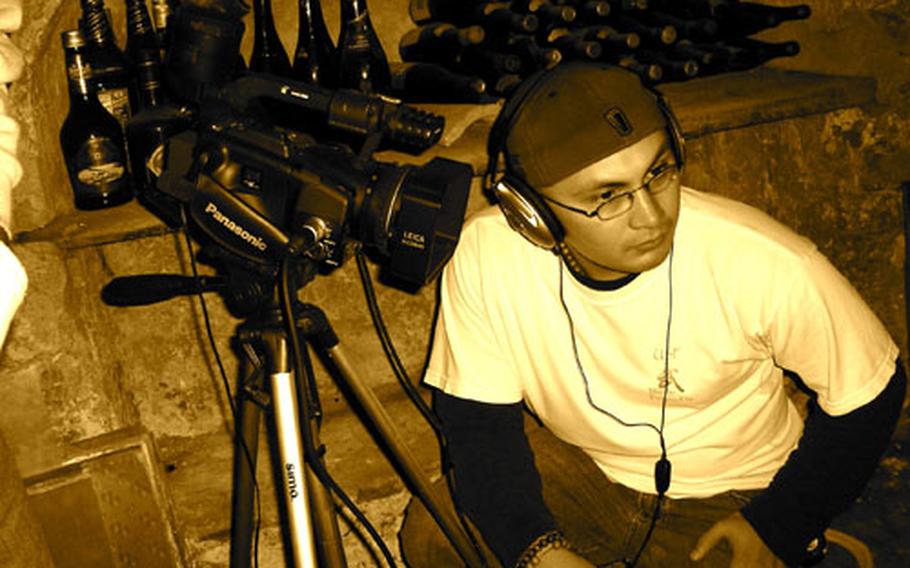 CAIAZZO, Italy &#8212; In the darkened, musty theater tucked in a crook of this tiny Italian town, Andrew Bliss&#8217; dream 18 years in the making came true.

He hosted his first movie premiere.

For the past year, Bliss and fellow cast members have been up at 3 a.m. or working through weekends to shoot the horror flick &#8220;The Suffered,&#8221; a gory tale of a man&#8217;s encounter with death after attempting suicide.

On Saturday night, the two-hour film debuted for the public and some crewmembers.

&#8220;This was our first premiere, and it was a huge task for us,&#8221; said Bliss, a U.S. sailor and broadcast journalist for American Forces Network in Naples, Italy.

Bliss wrote the script and directed the film and said he couldn&#8217;t have pulled off the endeavor alone. He praised the crew, which included Stefano Moffa (the only Italian cast member), Samantha Cook, Jeffrey Sinor, Cassi Nelson, Yvonne Jones and Antonio Sangiovanni. It was Sangiovanni who introduced Bliss to Caiazzo and the Sangiovanni family home&#8217;s frigid and damp basement, where much of the filming took place. Parts too were filmed at Naples Underground, Lago (Lake) d&#8217;Averno, the port of Pozzuoli and Casal di Principe.

Bliss, a petty officer second class, is no stranger to recording stories on film. But this is his first full-length feature.

Bliss and Petty Officer 2nd Class Thomas Ferguson co-produced &#8220;The Suffered,&#8221; which they estimate cost between $5,000 and $7,000. The two met when they scripted a commercial for a safety public service announcement for the base hospital, where Ferguson works as a corpsman.

The studio, Wufilmworks, will submit the independent film on various film festival circuits, Bliss said. &#8220;The first one is the Ischia Film Festival, which is coming up. [Then] our plan is for film festivals from April until April 2007. This premiere kicks this off. We&#8217;re focusing on Europe and the States, and a couple in the Far East.&#8221;

Bliss did a good job pulling together a premiere (which included dinner and bus transportation for the roughly 200 moviegoers from two U.S. bases in Naples), said Jerome Carr, a civilian at Joint Allied Forces South.

And he&#8217;s working to get the film run at the base theater at Naval Support Activity, Naples, but he needs to make technical sound changes first.