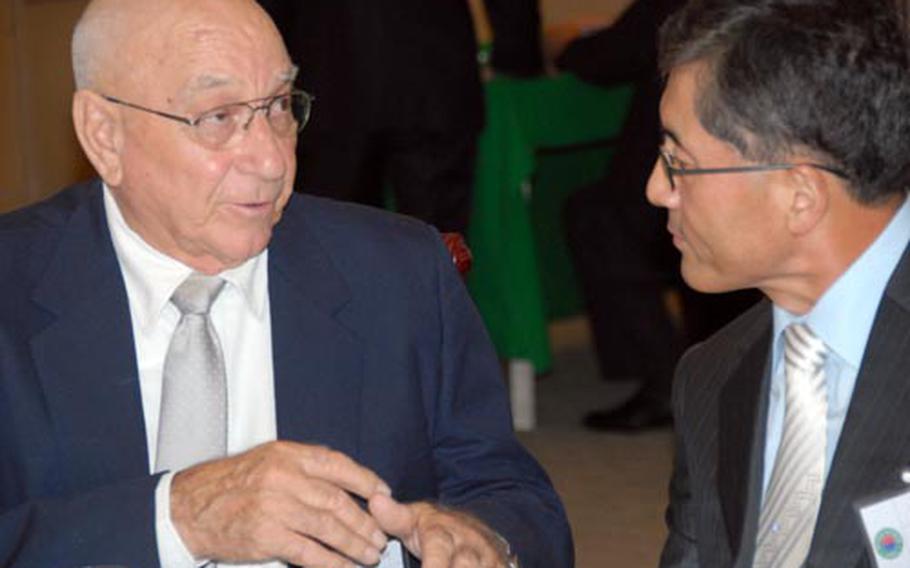 Retired Command Sgt. Maj. Alfred Braswell, left, talks to a South Korean veteran of the Vietnam War during a friendship dinner on Thursday night. Nearly 100 South Koreans and 10 Americans who fought in the war attended the dinner. (Ashley Rowland / S&S)

Almost four decades ago, Kim, then a soldier doing his mandatory three-year service in the South Korean military, opted to fight in what was even in his country an unpopular war. He wanted to get away from the army&#8217;s notoriously abusive officers, who he said would wake soldiers up for no reason and beat them.

He also wanted to show his gratitude to the United States for helping South Korea during the Korean War.

Kim and most of the 97 South Korean veterans of Vietnam who attended the Friendship Dinner at the Seoul Press Center on Thursday didn&#8217;t fight alongside the Americans in the Vietnam War. But the 10 Americans who attended said the South Korean troops were tough, orderly and smart, embedding themselves in the Vietnamese communities they patrolled and developing effective counterinsurgency techniques.

"They were legend," said Charles Jackson Jr., a retired colonel, who now works for the 8th U.S. Army.

Alex Roese remembered traveling in convoys on Highway 19, through an American-patrolled section where bridges were attacked by Viet Cong once or twice a month.

But there were no attacks farther south, in the South Korean-patrolled section.

Dr. Ned Stoll, an American who served three tours in Vietnam, said many of the U.S. troops had been drafted and didn&#8217;t want to be there, and they brought the racial tensions and drug problems from home to the war. They were undisciplined, and units were unstable because commanders were rotated in and out too frequently, he said.

"We were in awe of how disciplined they were," he said of the South Koreans.

About 325,000 South Koreans and more than 2,500,000 Americans served in Vietnam. About 50 of those U.S. Vietnam veterans now live in South Korea, and about 30 of them live or work at or near U.S. Army Garrison-Yongsan, said Col. Bryan Groves of U.S. Forces Korea, who helped organize the event.

Retired command sergeant major Alfred Braswell, who fought in World War II, Korea and Vietnam, talked with Korean veterans about Seoul "when it was nothing but a burnt-out rubble of a city."

He said the veterans were alike, though from different countries.

Several South Korean vets at the dinner &#8212; the second hosted by the Vietnam Veterans of Korea &#8212; said they were angry about the ongoing protests against the importation of U.S. beef.

"I feel so sorry that Americans can see that," said retired major general Han Kwang-duk, pointing out the window to a candlelight vigil in the lawn of City Hall, 19 stories below.

Chung Jae-sung, webmaster for the South Korean veterans&#8217; site www.vietvet.co.kr, said many young South Koreans don&#8217;t know of or appreciate how the Americans have helped the country.