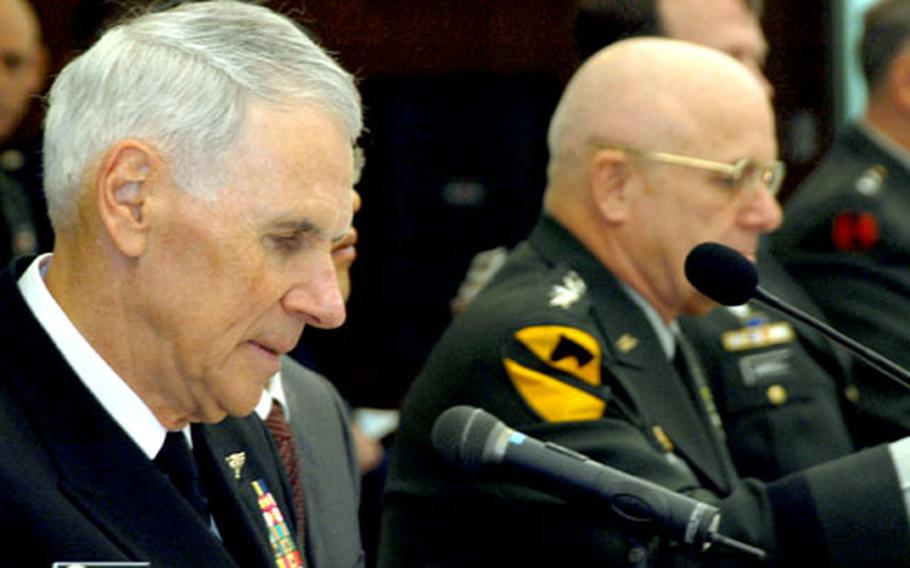 SEOUL &#8212; Top U.S. and South Korean military officials met here Thursday about ongoing deterrence issues against North Korea on the eve of a visit from Secretary of Defense Donald Rumsfeld.

Rumsfeld, America&#8217;s top military official, was scheduled to be in Seoul on Friday to meet with South Korean leaders about the two countries&#8217; military relations and their ability to defend the country against North Korean aggression.

Thursday&#8217;s meeting was a precursor to Friday&#8217;s 27th annual Security Consultative Meeting, which Rumsfeld will attend. There officials are expected to continue discussions about military preparedness.

Part of the discussions may include South Korean President Roh Moo-hyun&#8217;s comments last week regarding his military&#8217;s five-year plan to bolster its abilities to command during wartime. Currently, the U.S. would seize military control of the country in such a crisis.

Earlier this week, Rumsfeld said he thought South Korea was ready for a more prominent role.

&#8220;It&#8217;s been what, 50-plus years since the war ended, and it is time for the Republic of Korea to assume a larger role and responsibility,&#8221; he told reporters en route to China, part of his tour of Asia this week. Republic of Korea is the official name for South Korea.

On Friday, he was scheduled to hold a town hall meeting on Yongsan Garrison, America&#8217;s military headquarters in South Korea. That meeting will be broadcast live on the American Forces Network shortly after 4 p.m., and again at 5 p.m. Saturday.