South Korean troops practice decontamination techniques during a chemical warfare exercise on a South Korean Army installation in Taegu. They did the training along with their counterparts from the U.S. Army&#39;s 23rd Chemical Battalion. (Franklin Fisher / S&S)

South Korean troops practice decontamination techniques during a chemical warfare exercise on a South Korean Army installation in Taegu. They did the training along with their counterparts from the U.S. Army&#39;s 23rd Chemical Battalion. (Franklin Fisher / S&S) 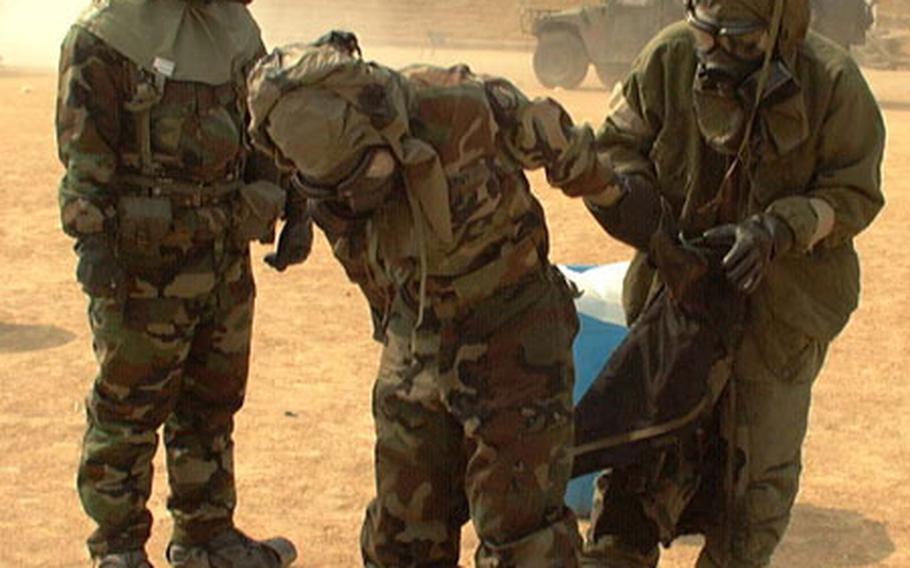 TAEGU, South Korea &#8212; Ask one platoon sergeant in a U.S. Army chemical unit in South Korea how his troops benefit by training with their South Korean counterparts and he starts by talking about blind dates.

&#8220;This way, when the chemicals come across the DMZ, we know what the ROK Army is capable of, they know what we&#8217;re capable of. We know their tactics, techniques and procedures, they know our tactics, techniques and procedures. And if we have to come together to do a joint decon, we can do that. We&#8217;re not learning at the last minute.&#8221;

The battalion&#8217;s main wartime job is decontaminating highways, airfields, supply depots and other &#8220;fixed sites&#8221; the enemy might hit with chemical agents. The troops would work closely with South Korean Army chemical units, spraying down those areas with decontaminants, especially in a war&#8217;s early stages.

On Tuesday, about 30 members of the 267th Chemical Company were on a South Korean Army installation in north Taegu with soldiers from South Korea&#8217;s 50th Homeland Reserve Division to practice decontaminating vehicles and troops.

Under the afternoon&#8217;s mock-battle scenario, the enemy had fired &#8220;WMD,&#8221; or weapons of mass destruction, hitting an important roadway with chemical agents. The U.S. and South Korean chemical troops had to move chemical trucks through the area, spraying water to simulate decontaminants.

In the final phase, the troops moved to a separate &#8220;clean&#8221; area, where the South Korean and U.S. trucks and troops were decontaminated.

One major benefit of these exercises is an exchange of insights.

Koski, for example, picked up a few things Tuesday. When his unit decontaminates vehicles, a soldier with a hose sprays from the bottom of the vehicle and works up, eventually having to scale a ladder to get at its upper parts. But the South Koreans set up a metal arch-like rack fitted with spray nozzles at various points, some high enough to cover the vehicles&#8217; tops.

And when the Americans decontaminate troops, the process ends with the soldier still wearing the battle dress uniform, or BDUs. But Koski saw that the South Koreans decontaminate soldiers all the way to their underwear, with a shower to follow.