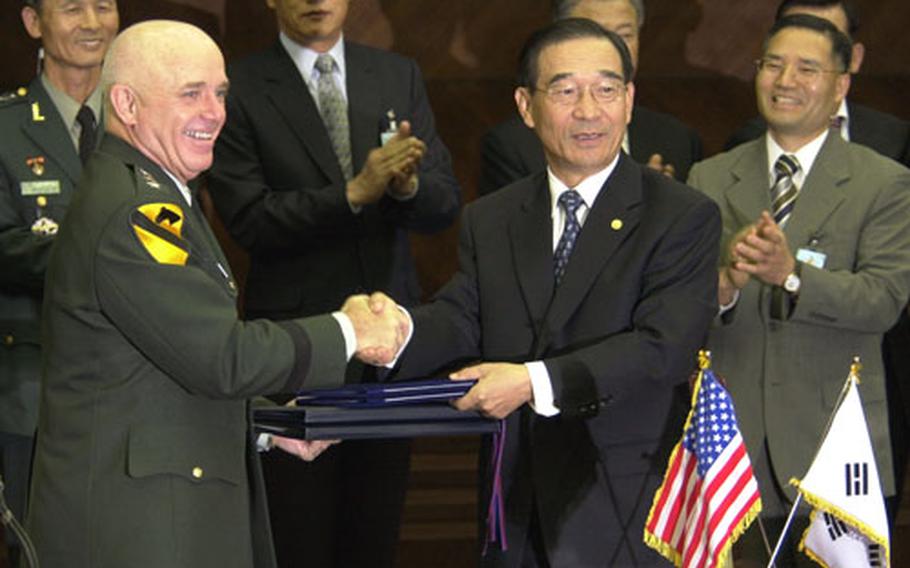 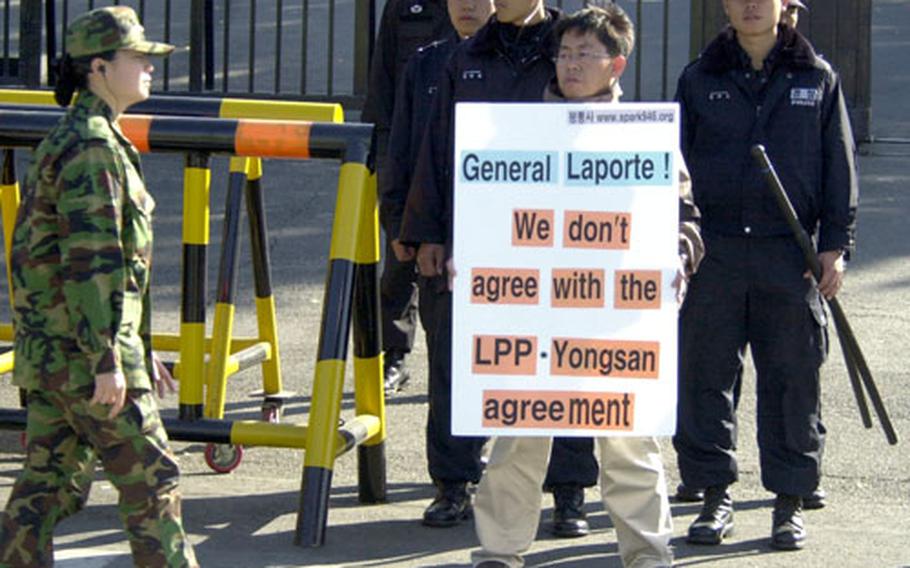 Outside the Ministry of Defense, a protester expresses displeasure with the agreement. (T.D. Flack / S&S)

SEOUL &#8212; Before a bank of cameras and a row of officials standing shoulder-to-shoulder, top South Korean and U.S. representatives Tuesday signed the finalized agreements to close Yongsan Garrison and move several other U.S. bases.

In a short ceremony at the South Korean Ministry of National Defense, U.S. Forces Korea commander Gen. Leon J. LaPorte and Defense Minister Yoon Kwang-ung signed several copies of the agreements, stood, exchanged the copies and shook hands, as onlookers gave a round of applause and camera flashes filled the room.

Under one agreement, the U.S. military headquarters at Yongsan will be shuttered by 2008, with the bulk of soldiers stationed there moving to a new hub in Pyongtaek. South Korea and the United States reached the deal earlier this year after a decade of negotiations.

LaPorte and Yoon &#8212; joined at the signing table Tuesday by USFK deputy commander Lt. Gen. Garry R. Trexler and Director General of North American Affairs Bureau Kim Sook &#8212; also signed amendments to the Land Partnership Plan, a related agreement that spells out a schedule for closing other U.S. bases on the peninsula.

Under the revised plan, nine bases in the 2nd Infantry Division area will be closed by the end of this year, with the land being returned to South Korea by the end of 2005. The amendments significantly moved up the closure dates, many of which originally were negotiated to occur in 2011.

Tuesday&#8217;s signing ceremony lasted around 15 minutes, with neither of the principals making public comments. As the camera flashes went off and the signing continued, Yoon and LaPorte shared a few joking comments that were inaudible to the audience.

Both men smiled throughout the ceremony, as aides passed blue folders holding documents to be signed.

The agreements now must be ratified by the South Korean National Assembly, a step that likely will occur by year&#8217;s end, Defense Ministry officials said.

When Yongsan is closed, it will end more than 50 years of an American military presence in the heart of South Korea&#8217;s capital. Around 8,000 soldiers &#8212; along with thousands more civilian employees and contractors &#8212; work at the base, which often has been a flashpoint for anti-American protesters.

During Tuesday&#8217;s ceremony, a half- dozen protesters stood outside the Defense Ministry holding signs proclaiming their opposition to the Land Partnership Plan and Yongsan closure.

In addition to the relocation of bases, the U.S. plans to remove 12,500 troops from South Korea over the next three years. That reduction will come in phases, with the first 5,000 being pulled out this year. The 3,600 2nd Brigade, 2nd Infantry Division troops deployed to Iraq from South Korea earlier this year are among that number, and will relocate to Fort Carson, Colo., once their deployment is done.