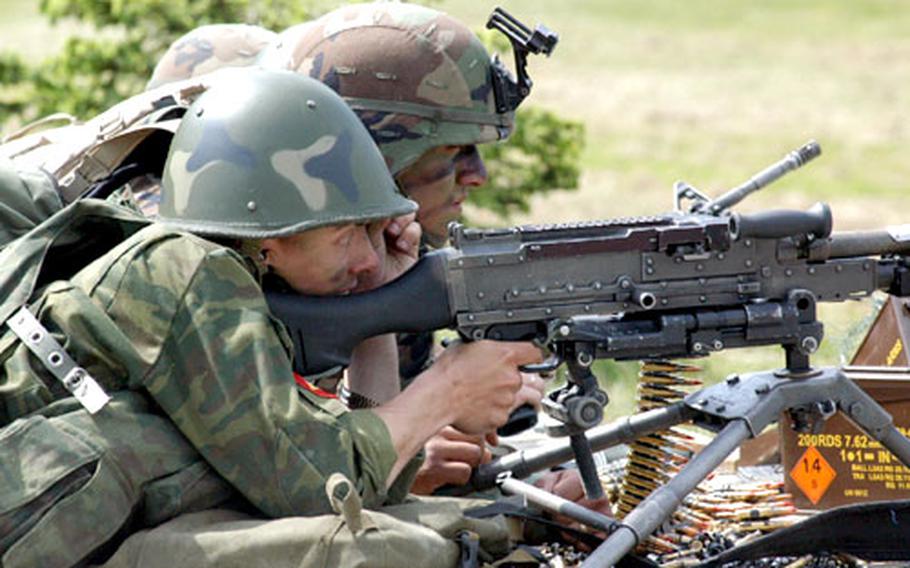 With a little help from his American guide, a Russian soldier picks out a target to knock down with a U.S. machine gun at the Grafenwöhr training area, Germany, on Thursday. (Ben Murray / S&S)

With a little help from his American guide, a Russian soldier picks out a target to knock down with a U.S. machine gun at the Grafenwöhr training area, Germany, on Thursday. (Ben Murray / S&S) A Russian soldier in the turret of a Humvee at Grafenwöhr gets some pointers from an American gunner on how to load and fire the automatic weapon. (Ben Murray / S&S) 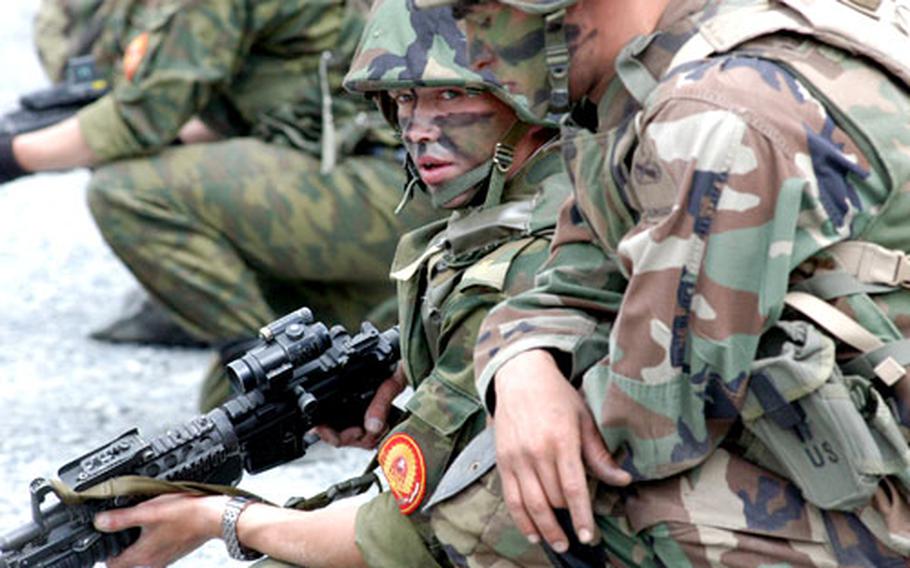 A Russian soldier, flanked by his American counterpart and holding an American weapon, waits for the order to pull back in a defensive simulation at Grafenwöhr on Thursday. (Ben Murray / S&S) A row of Russian infantry patches lines up next to the shoulder flags of American uniforms as soldiers from the two armies stand together for a live-fire operation at the Grafenwöhr training area. (Ben Murray / S&S) Russian and American soldiers pose for a photo atop the Angry Penguin, a tank being used for a live-fire exercise at the Grafenwöhr training area. (Ben Murray / S&S)

But such was the situation Thursday at the Grafenw&#246;hr training area as Russian and American soldiers took part in a historic training program at the U.S. facility, where enlistees from both armies were paired together for the first time in a joint live-fire operation in Germany.

About 300 troops from the Russian Combined Arms Academy and the 4th Russian Armored Division &#8212; backed closely by American helpers and translators &#8212; shouldered U.S. machine guns, drove Bradley fighting vehicles and performed short battle maneuvers in the capstone of Exercise Torgau 2005. The two-week program is meant to build relations between the two armies.

&#8220;They had a blast out there,&#8221; said 1st Lt. Brett Brenkus, a tank platoon leader for the 1st Battalion, 37th Armored Regiment, whose troops were showing Russian soldiers how to drive and fire the American tanks.

The exercise is the second portion of a years-long program started to improve Russian and American forces&#8217; knowledge of the other&#8217;s weapons and tactics, with the goal of eventually allowing them to perform large-scale joint combat operations.

U.S. commanders said a large portion of the operation &#8212; named for the town where U.S. and Soviet forces first made contact in eastern Germany at the end of World War II &#8212; is simply to let the front-line troops become familiar with each other.

To that end, American troops from the 1st Armored Division spent a week in Moscow and a military training center near the Russian capital trying out Kalashnikov rifles and T-72 tanks before returning to Germany to let the Russian soldiers handle U.S. equipment.

Soldiers from both nations said that even though language barriers often impeded the transfer of specific knowledge of weapons systems and tactics, many of the troops had quickly formed bonds over the course of the exercise.

&#8220;We have a lot in common,&#8221; Lt. Akhmed Kazharov, battalion commander at the Russian Combined Arms Academy.

The exercise, which started on May 23, will wrap up Friday with closing ceremonies at Grafenw&#246;hr.