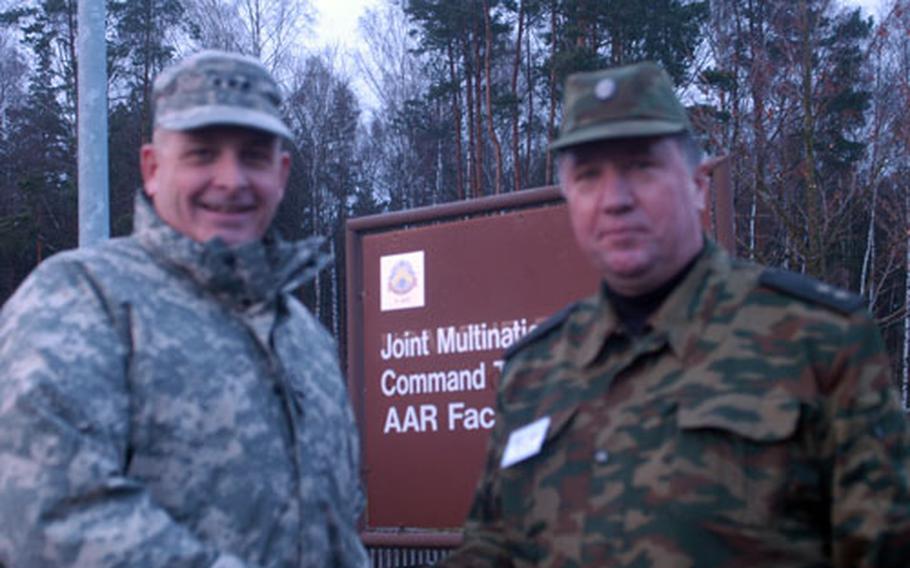 Lt. Gen. Kenneth Huntzeker, commander of the U.S. Army&#39;s V Corps, left, and Lt. Gen. Vladimir Chirkin, deputy commander of the Russian army&#39;s Moscow Military District, were getting to know each other at Grafenwöhr, where the two armies were conducting a joint exercise designed to enhance any future joint operations and form friendly military ties. (Nancy Montgomery / S&S)

Lt. Gen. Kenneth Huntzeker, commander of the U.S. Army&#39;s V Corps, left, and Lt. Gen. Vladimir Chirkin, deputy commander of the Russian army&#39;s Moscow Military District, were getting to know each other at Grafenwöhr, where the two armies were conducting a joint exercise designed to enhance any future joint operations and form friendly military ties. (Nancy Montgomery / S&S) 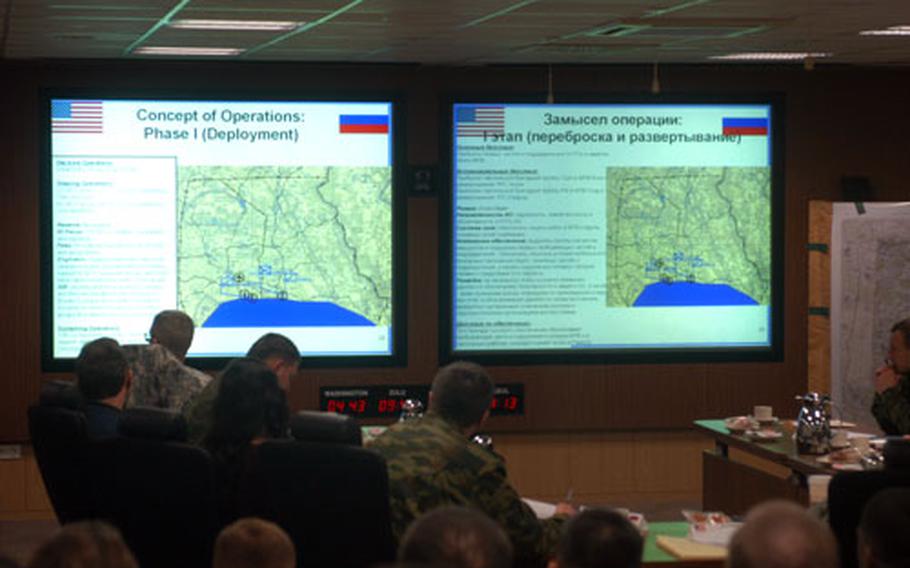 Briefings for the Torgau exercise&#39;s simulated intervention in a fictional country beset with insurgent violence were conducted in English and Russian, more than doubling such a briefing&#39;s usual length. Some 60 translators, both military and civilian, helped make sense of it for all but the few bilingual officers. ()

GRAFENW&#214;HR, Germany &#8212; Russian President Vladimir Putin may have said recently that, with a robust military, &#8220;we will not allow anyone to poke their snotty nose into our affairs.&#8221;

President Bush may have said he was &#8220;deeply concerned&#8221; about the detentions of Putin&#8217;s opposition leaders. And Secretary of State Condoleezza Rice may have said it would be &#8220;regrettable&#8221; if Russia abandons a key arms agreement as it says it will.

But for the 200 U.S. and Russian army officers working together at a damp and chilly Grafenw&#246;hr last week, relations were apparently warm and sunny.

&#8220;I used to think Americans were quite aggressive in nature, but it turns out they&#8217;re just people like us,&#8221; Russian Lt. Gen. Vladimir Chirkin said through an interpreter. &#8220;We could have turned our backs to each other and insulted each other for years, but why choose that?&#8221;

&#8220;It&#8217;s those military-to-military relationships that allow our countries to keep talking and keep each other informed on the capabilities of our armed forces,&#8221; said Lt. Gen. Kenneth Hunzeker, V Corps commander.

The two-week exercise called Torgau &#8212; after the German city where Russians and U.S. soldiers met up near the end of World War II, before the two countries settled into a 50-year Cold War &#8212; is the third of its kind since 2004. According to V Corps, the exercise&#8217;s objectives are to promote understanding and cooperation between the countries&#8217; military forces; to develop common formats for reports, orders and briefings; and to train together, using virtual troops on computers for peacekeeping and enforcement missions.

Krivda said U.S. officers had learned from the Russians about urban combat from their experiences in Chechnya, which the Russians regarded as a war against Islamic terrorists but the U.S. had called separatist insurgents.

Krivda said the Russians, whose military structure is extremely top-down with little decision-making by the lower ranks &#8212; and whose enlisted ranks are primarily conscripts &#8212; were interested in the U.S. military&#8217;s cadre of noncommissioned officers. They also were fascinated with the U.S. use of virtual training, basically video games.

This year&#8217;s exercise comes at a time when relations between the two countries appear to be at an ebb, with Russian concerns about a U.S. missile defense system to be placed in eastern Europe and NATO expansion, and U.S. concerns about Putin&#8217;s increasingly authoritarian style and consolidation of power.

Chirkin said Putin has been been an effective leader who has helped bring prosperity and pride to the country. &#8220;There are positive trends in Russia in the economic, political and social spheres,&#8221; he said.

But the general, who&#8217;s spent 35 years in the Russian military and works in Moscow, said international relations don&#8217;t concern soldiers&#8217; interactions, and that what national leaders say in public might not be what they say privately.

In fact, a V Corps official said, even as the United States keeps a wary eye on what U.S. Army Europe commander Gen. David McKiernan called a &#8220;resurgent Russia,&#8221; it is also hoping for increased help from Russia in the war on terrorism and in its influence with Iran.

The main event during the exercise for the officers is the execution of a pretend U.N.-mandated invasion of a fictitious country called Berkshire.

According to the scenario, Berkshire has become unstable after its president was assassinated, and Sunni insurgents, aided by a neighboring fictitious country, are blowing things up and killing people. The plan was to deploy, defeat, or, as the Russians said, &#8220;destroy&#8221; the insurgents, and get the country back on its feet.

But there were other activities, designed to foster friendship and build teams &#8212; volleyball and basketball games, a trip to a Christmas market and vodka sampling.

It would also be realistic to think that there were some attempts at covert information-gathering, after 50 years of Cold War spying. Russian operatives were identified beforehand, a V Corps official said, so that any probing questions could be left unprobed.