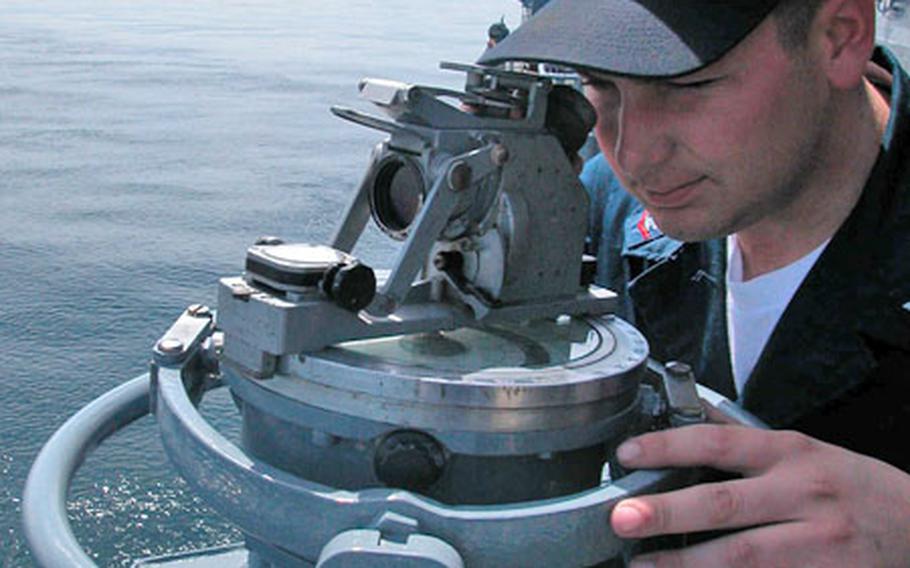 Petty Officer 3rd Class Darrell Crawford looks through a gyrocompass repeater on the starboard bridgewing of the Russian frigate Neustrashimy. The repeater is used to determine another ship&#39;s direction in relation to that of the observer&#39;s ship. (Eric Brown / U.S. Navy)

Petty Officer 3rd Class Darrell Crawford looks through a gyrocompass repeater on the starboard bridgewing of the Russian frigate Neustrashimy. The repeater is used to determine another ship&#39;s direction in relation to that of the observer&#39;s ship. (Eric Brown / U.S. Navy) 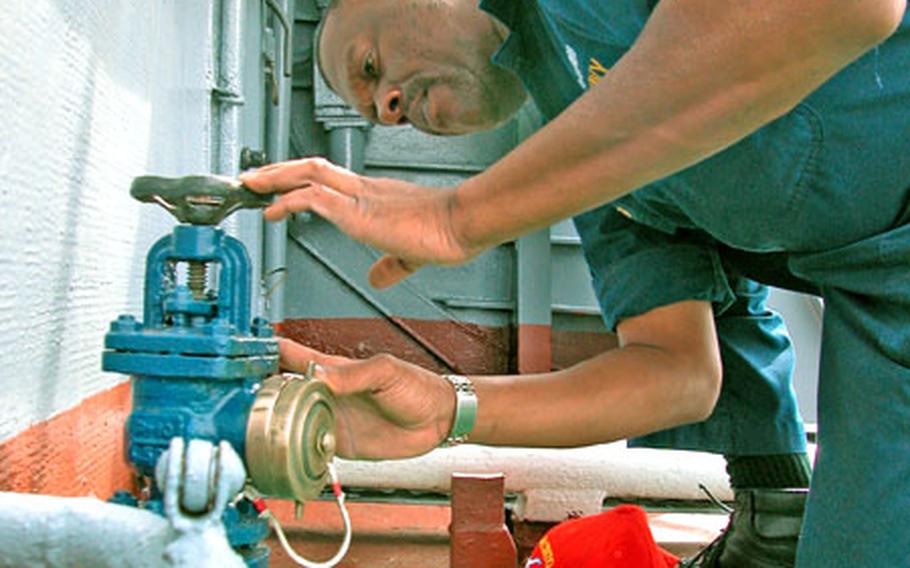 When Senior Chief Petty Officer William Bridgeforth joined the military 19 years ago, the Russian navy was the enemy.

Last week, it was his host.

&#8220;It felt different to be up close and personal with, and talking to, someone that you had been trained and sworn to defend against,&#8221; Bridgeforth said in an e-mail response to questions.

The San Jacinto and the Neustrashimy were working together in the just-finished BALTOPS exercise, which included more than 5,000 military personnel aboard 38 ships from 13 countries.

Part of the exercise included what officials called &#8220;cross-pollenization&#8221; of sailors between ships.

Cmdr. Dan Bates, the exercise public affairs officer, said that they &#8220;cross-pollenized&#8221; two or three sailors between the different ships.

&#8220;It allows sailors to learn from each other and also see how others live and operate,&#8221; he wrote in an e-mail. &#8220;They compare notes on common operations like engineering and bridge watches.&#8221;

Crawford and Bridgeforth were selected by San Jacinto to visit the Neustrashimy.

&#8220;Other areas, such as their flight deck and weapons systems, seemed to be about the same as ours, [but] with slight variations on procedures.&#8221;

Sailors on both ships, Crawford said, share similar long working hours and spend their limited time off playing cards, watching movies or catching up on sleep.

Living and dining conditions for the Russian officers &#8212; their tour guides during their 10 hours aboard &#8212; were similar to those on San Jacinto.

&#8220;The food was very good,&#8221; said Crawford, who&#8217;s been stationed on two ships during his four years in the Navy. &#8220;Lunch consisted of an appetizer plate of beets, carrot salad and small pieces of herring, followed by cabbage soup. For the main course we had potatoes and sausage.&#8221;

The day after the visit by Crawford and Bridgeforth a few Russian sailors visited the U.S. ship.

Bridgeforth agreed, saying a visit like this is helping to thaw the remains of Cold War tensions.

&#8220;I think they felt the same way because this is something (the Cold War) that we had no control over,&#8221; said Bridgeforth, who grew up in Detroit.

&#8220;But now, views and ideas have changed. I am glad that I may have had some small part in that, maybe just through a firm handshake and a smile.&#8221;