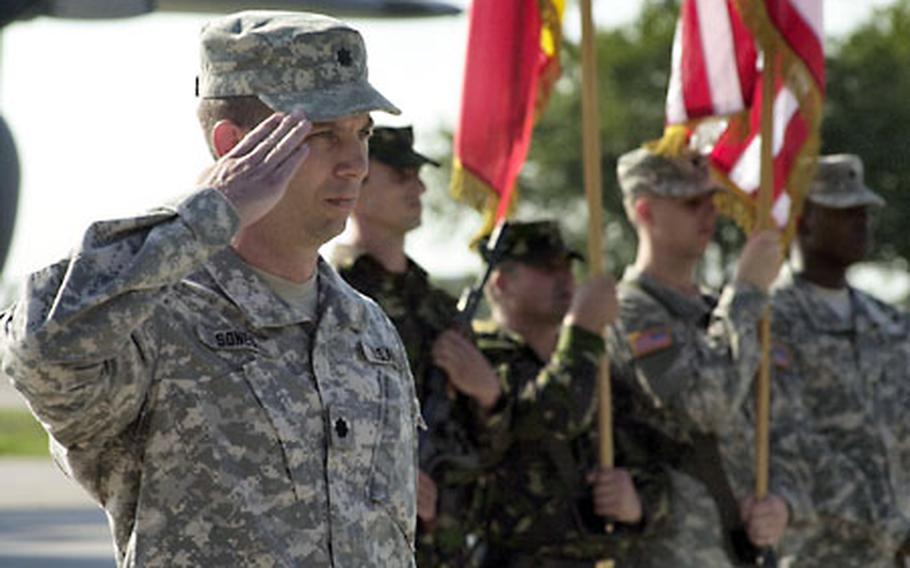 American and Romanian military forces marked the start of a historic, two-month exercise on Friday that will serve as a trial run for thousands of U.S. troops expected to rotate in and out of Romania and Bulgaria for years to come.

The exercise, dubbed Proof of Principle, includes about 1,000 U.S. military personnel and civilians. It will serve as a major test for Joint Task Force-East, the new command that will oversee future Army brigade-level deployments to the former Eastern Bloc nations.

U.S. Army Col. Peri Anest, the task force commander, underscored the importance of the drill during his remarks at a formal opening ceremony. He said the training would boost the task force&#8217;s military relationship with its new NATO members and be a chance for the headquarters to prepare. The Army has neither decided which unit will make the first regular rotation through Eastern Europe nor established a firm date.

&#8220;This proof of principle exercise is clearly the top priority for the commanding general of United States Army Europe, next to units deploying to contingency operations,&#8221; Anest said. &#8220;A priority we all take very seriously. It will be our actions, not our words, to prove this is true.&#8221;

American and Romanian troops stood in separate formations in front of static displays of military helicopters and a C-130 transport plane on Friday as part of the ceremony. The exercise is the culmination of two years of planning and mutual agreements hashed out by senior officials.

The frequent presence of American troops at this Romanian air base is a significant illustration of the Pentagon&#8217;s plan to trim its presence at Cold War-era bases in Europe and expand to smaller bases east.

The units participating in the exercise come mostly from older bases in Germany, Italy and the United Kingdom. Soldiers from U.S. Army Europe headquarters in Heidelberg, Germany, the 1st Armored Division in Baumholder, Germany, and Southern European Task Force in Vicenza, Italy, make up the task force headquarters. Navy Seabees from the Port Hueneme, Calif.-based Naval Mobile Construction Battalion 40, the U.K.-based 352nd Special Operations Group, along with infantry battalions from Romania and Bulgaria are taking part.

Romania has been a staunch ally of the United States in both Afghanistan and Iraq, and the American use of this once ramshackle base near the Black Sea could benefit both countries.

While military units get access to training areas with fewer restrictions than in Western Europe, the deployments could provide cash to the local economy. The U.S. military is pouring millions into sprucing up and improving area bases and ranges in Romania and Bulgaria.

This base, called &#8220;MK&#8221; for short, has gone through its own makeover in the past month. Crews have mowed waist-high grass and painted buildings. The Army and Air Force Exchange Service has set up a barber shop and small exchange.