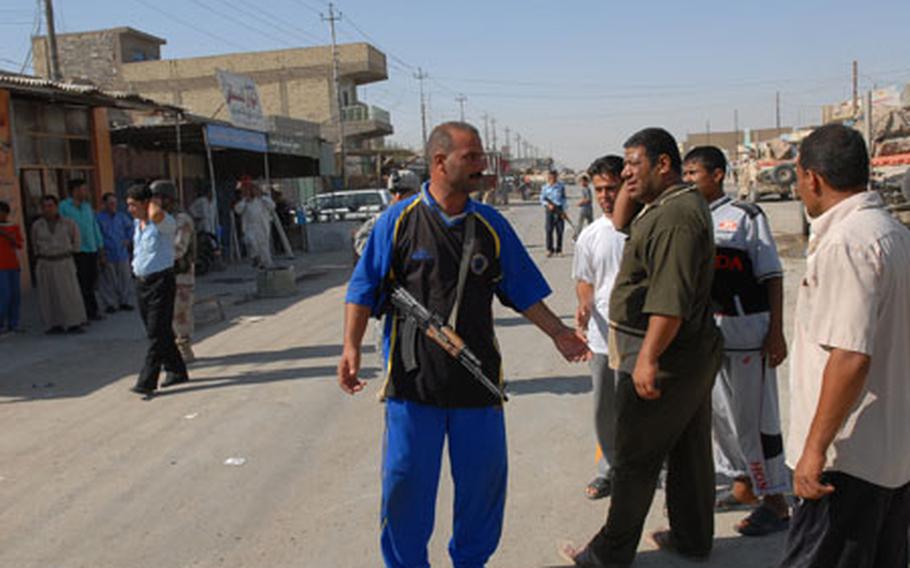 An armed guard belonging to a group of Sunnis called "Volunteers" helps provide security in Nasr Wa Salam, Iraq, a former al-Qaida stronghold in Iraq, during a visit by a Shiite government official last month. They are one of the groups of Iraqis working with coalition forces to provide protection in their own neighborhoods. (Zeke Minaya / S&S file photo)

The 13 Iraqi men sat attentively in their seats, offering eager answers to questions posed to them by a U.S. officer.

Capt. Robert Hewitt, 37, commander of Headquarters Troop, 1st Squadron, 40th Cavalry Regiment, wanted to know if the men recalled details of a lecture the day before on how to occupy a fixed-site security position.

He stressed that it was important for the men to position themselves in such a way that they could keep a good watch on their surroundings. The higher the ground, said Hewitt, the better.

The men, Sunni Arabs ranging in age from their late-teens to mid-40s, nodded their heads as Hewitt&#8217;s point sank in.

The class held last week was part of an ongoing experiment for the soldiers of 1-40th Cavalry, from Fort Richardson, Alaska, and their Iraqi guests.

Here on the southern outskirts of Baghdad, near the rough and tumble town of Mahmudiyah, where the 1-40th Cavalry has been operating for the past 11 months, it&#8217;s entirely possible that the soldiers and Iraqi men now sitting in front of them were shooting at each other just a few months ago.

But now, as part of a strategy developed over the past several months, U.S. forces are enlisting the aid of Sunni tribesmen across Iraq, many of them former insurgents.

The goal of the often-uneasy alliances, according to U.S. officers, is to capitalize on growing discontent among Sunni Arabs over al-Qaida&#8217;s extremism and indiscriminate violence and to use local tribal militias to drive insurgents affiliated with the terror group out of Sunni areas.

The armed groups are known by various names in different areas of Iraq. South of Baghdad, U.S. military forces prefer to use the term &#8220;concerned local citizens.&#8221;

Since mid-July, when a local figure named Sheik Ali was attacked by al-Qaida and forced out of Hawr Rajab, a farming district near Mahmudiyah, soldiers with the 1-40th Cavalry have been working with about 50 members of the al Dulaimi tribe to try to regain control of the village.

&#8220;What they are is concerned local citizens. They are from that town themselves, and they are taking their town back from a group of violent killers, which is al-Qaida.&#8221;

Paid for their servicesContracted officially as security guards to protect local infrastructure, Harris said each group member is paid $400 a month by U.S. forces for his services.

Although each applicant is screened for prior insurgent activity &#8212; a bar to enlistment &#8212; Harris acknowledged that about three-quarters of the group probably fought against U.S. troops in the past.

But Saba Khaider, 39, who described himself as &#8220;an educated man,&#8221; who used to work at the Ministry of Finance, said he has never taken up arms until now.

After working in Hawr Rajab for nearly a year with little cooperation from the locals, Harris said U.S. forces are grateful for the help they&#8217;re now getting from the group.

In the past month, &#8220;concerned citizens&#8221; from the village have brought in a number of suspected al-Qaida members, including three men on 1-40th Cavalry&#8217;s high-value target list.

It was the second day of a two-day course featuring instruction on first aid, detainee operations, rules of engagement, sensitive site exploitation, fixed-site security, explosives recognition and how to properly report information. Harris said that U.S. forces do not provide weapons or ammunition to the group.

When a photograph of a recently detained insurgent popped up on a projection screen, shouts of recognition came from the group.

While the new approach has put considerable pressure on al-Qaida in many areas of Iraq, it has not been without controversy. Iraqi Prime Minister Nouri al-Maliki, a Shiite, has voiced strong opposition to the creation of Sunni militias, complaining that they operate outside the law and threaten the legitimacy of the state.

Speaking Aug. 24 to reporters at the Pentagon, Maj. Gen. Rick Lynch, commander of Multinational Division Center, said nearly 10,000 Iraqis, including Sunnis and Shiites, have joined &#8220;concerned citizens&#8221; groups throughout his area, which encompasses Baghdad and regions to the north and south.

Lynch said he disagreed with concerns that creating the militias could undermine Iraq&#8217;s central government. On the contrary, local leaders were &#8220;implementing grass-roots governance&#8221; and improving &#8220;the lives of their citizens by resolving problems they can solve locally,&#8221; he said.

However, members of these groups would &#8220;have to become legitimate members&#8221; of the Iraqi security forces eventually, he said. &#8220;They need to go to the police academy; they need to join the army and go to army training,&#8221; Lynch said, adding that about 1,500 names from his area of operation had already been submitted to the Iraqi government for security forces training.