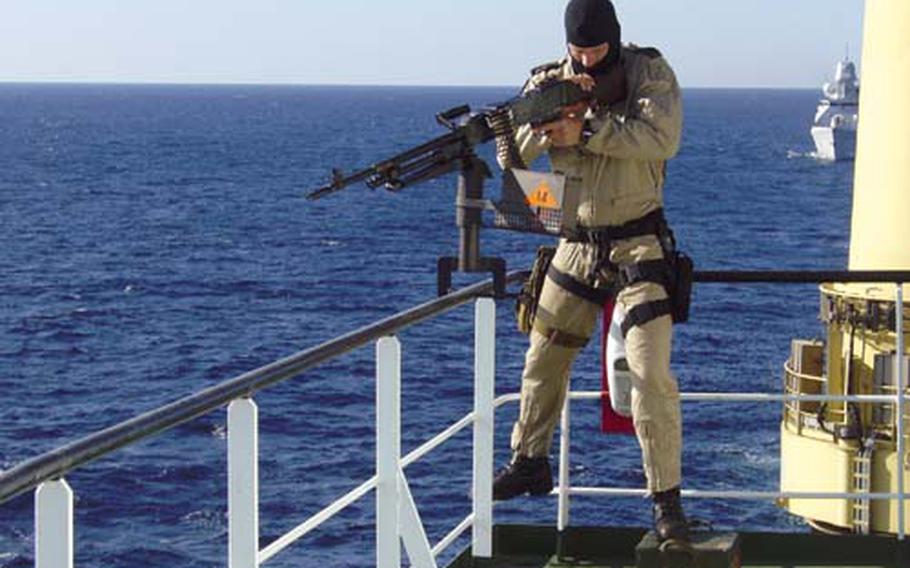 A member of the Dutch special forces stands guard near the bridge of Dutch cargo ship MV Jumbo Javelin as it passes near the Gulf of Aden on Monday, Dec. 8, 2008. The Dutch warship De Ruyter, seen in the background, is escorting the cargo ship through the Gulf of Aden, which has become the world&#39;s top piracy hotspot this year. (Tom Maliti / AP)

A U.N. resolution that was proposed by the United States earlier this week to combat pirates represents an about-face from the Pentagon&#8217;s position about a problem that threatens international shipping.

U.S. officials on Wednesday floated the idea of taking the fight to the pirates on land, authorizing countries to use military force &#8212; including air strikes &#8212; to stop pirates before they take to the seas.

Anti-piracy efforts now consist primarily of NATO warships and other naval forces patrolling the Gulf of Aden and Indian Ocean.

"I think at this point we are fairly confident we are going to get something, so this is where we are looking," State Department spokesman Rob McInturff said about the proposal. "Right now, the resolution is where we are putting our efforts. Our officers (at the U.N.) in New York have been talking with a lot of member states."

The proposal is scheduled to be voted on by the U.N. Security Council on Tuesday.

The resolution needs to be approved by nine of the 15 council members, and the yes votes must include all five permanent members &#8212; the United States, France, Great Britain, China and Russia &#8212; said Yves Sorokovi, a spokesman for UN Secretary General Ban Ki-moon.

"We believe the decision will be unanimous," Sorokovi said. "This we believe will be more effective as a resolution than a few resolutions that have been passed in the past couple of months on the piracy issue."

This is the third resolution in the past six months that deals with piracy, he added.

The resolution also calls for cooperation with the Somali Transitional Federal Government to prevent piracy and allows countries to prosecute and punish pirates under international law, U.S. State Department officials and Sorokovi said. So far Kenya has volunteered to prosecute and jail suspected pirates.

This latest resolution comes at a time when pirates operating from lawless Somalia are extending their range to hundreds of miles off the coast to seize ships and crews for ransom. Their recent plunder includes a Ukrainian ship loaded with heavy weapons which has been held since September.

Pirates have attacked about 100 ships off the Somali coast in the past year, which has led to the seizure of 40 vessels. They still hold 14 ships and more than 250 crew members, maritime officials told The Associated Press.

"The economic and business implications are just too serious for members (of the U.N.) to lean back. Our top officials in Somalia have said since the beginning of this year pirates have made upwards of $120 million in ransom," Sorokovi said. "There have been some companies and countries that have not been willing to disclose [ransom] figures."

The Defense Department, however, has expressed a view that military might may not be the solution.

The commander of the U.S. Navy&#8217;s 5th Fleet in the Middle East, Vice Adm. Bill Gortney, told reporters that striking pirate camps is problematic because they can be hard to identify and it puts innocent civilians at risk.

Gortney said such strikes would be going for an easy military solution to the problem. He said a better solution would be to improve Somalia&#8217;s stability and to clear up any legal hurdles so militaries can capture pirates and bring them to justice.

The admiral said that progress is being made in efforts to allow navies to detain and try pirates. But since the end of August, naval ships have disrupted potential pirate attacks in 50 instances, and in many of those interventions the pirates were released for legal reasons, Gortney said.

In late November, Pentagon spokesman Geoff Morrell was quoted by Stars and Stripes as saying, "I also take issue with this whole notion that it&#8217;s incumbent upon the armed forces of the world, the navies of the world to solve this problem.

U.S. military officials declined to comment for this story.