An American soldier monitors community project workers collecting their pay Monday at a patrol base on the border of Baghdad’s Sadr City district. U.S. forces in the area are overseeing the program despite a trend toward turning funding responsibilities over to the Iraqis. (James Warden / S&S)

An American soldier monitors community project workers collecting their pay Monday at a patrol base on the border of Baghdad’s Sadr City district. U.S. forces in the area are overseeing the program despite a trend toward turning funding responsibilities over to the Iraqis. (James Warden / S&S) 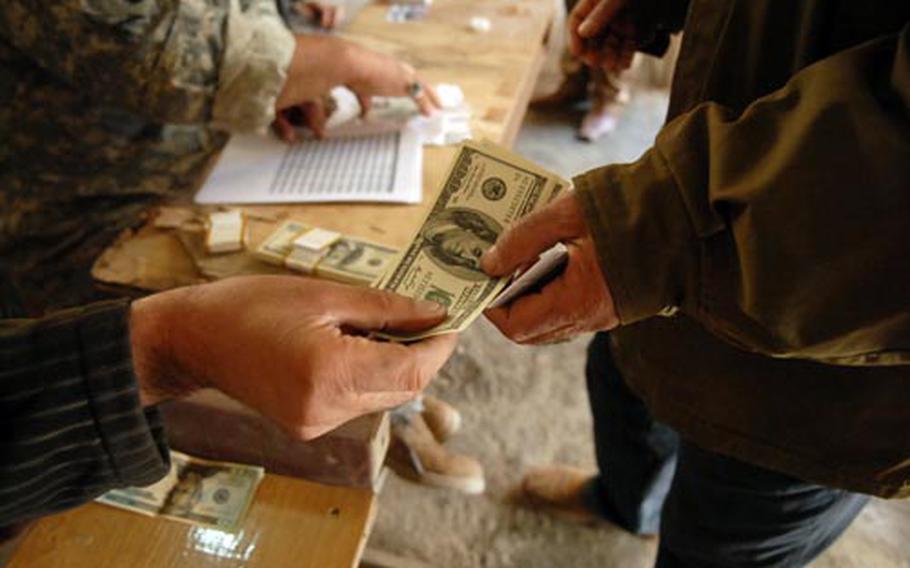 Salim Malah al-Saadi (left), a Community Project Workers supervisor, pays one of his workers Monday at a patrol base on the border of Baghdad’s Sadr City district. (James Warden / S&S) 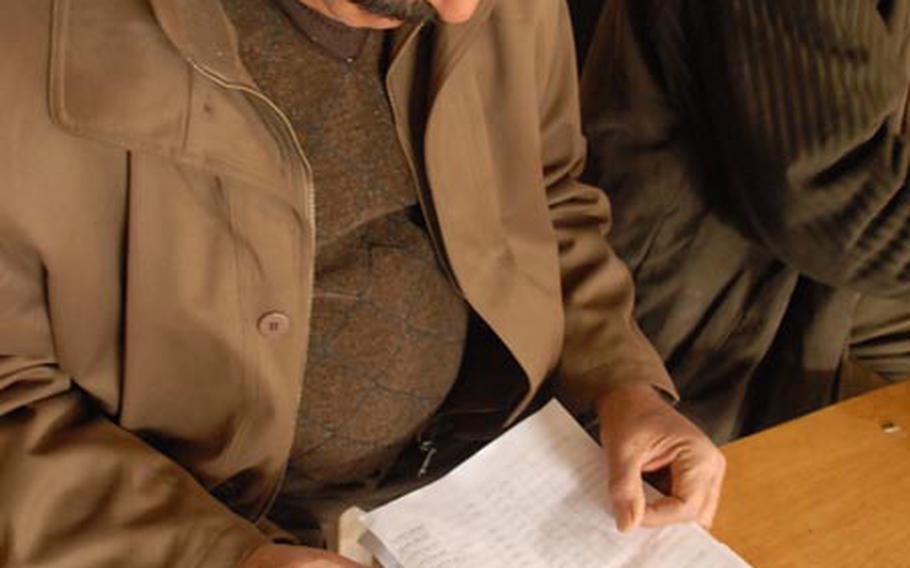 Salim Malah al-Saadi, a supervisor who manages 50 community project workers, checks the name of one of the workers against a list while distributing their pay Monday at a patrol base on the border of Baghdad’s Sadr City district. (James Warden / S&S)

BAGHDAD &#8212; Young Iraqi men stand in rows 10 deep on the Iraqi side of a patrol base at the border of Baghdad&#8217;s Sadr City district.

Their supervisors sit at a table with a list of all their men. American soldiers give them stacks of $100 bills. The supervisors check each badge against their list and hand each man his pay.

It&#8217;s exactly how the much-publicized "Sons of Iraq" program worked &#8212; only these aren&#8217;t "Sons of Iraq," and it&#8217;s been nearly three months since the Americans transferred responsibility for that program of armed civilian neighborhood guards to the Iraqi army.

The men waiting for their pay Monday are actually "community project workers." The program is a Civilian Conservation Corps-style initiative designed to clean up a district that has been neglected ever since Saddam Hussein built it two decades ago to house masses of Iraq&#8217;s Shiite poor.

Nearly three months after the American units transferred responsibility for the "Sons of Iraq" to the Iraqi Army, they continue to manage a similarly structured, American-funded program in Baghdad&#8217;s Sadr City district, albeit with a focus on community cleanup instead of security.

CPW got its start seven months ago, not long after the Americans first started operating in Sadr City, said Lt. Col. Brian Eifler, commander of Task Force 1st Battalion, 6th Infantry Regiment, the American unit in charge of Sadr City. They originally planned to launch "Sons of Iraq" groups when they went into the area after this spring&#8217;s fighting, Eifler said.

The goal was to provide fighting-aged males with jobs so they won&#8217;t feel as much pressure to take insurgent money and to watch over key parts of the city. Many Sadr City residents volunteered for the program, Eifler said.

But the Iraqi government wasn&#8217;t keen on arming young men in one of Iraq&#8217;s most troubled areas. Prime Minister Nouri al-Maliki refused to allow the Americans to form "Sons of Iraq" groups in Sadr City &#8212; adding a handicap to what was already a difficult job.

"We had this huge problem of Sadr City, and we couldn&#8217;t use some of the major contributors to peace the last couple years," Eifler said.

So the Americans decided on an alternative. They would not issue the young men weapons or even uniforms. The groups would also focus on projects instead of guarding checkpoints at key intersections. If they happened to hear something important to security, great. They could always call the Americans.

"It&#8217;s sort of grassroots, take-care-of-your-neighborhood guys," Eifler said. "We have a huge requirement for essential services &#8212; everything from garbage pickup to power to redoing the streets to cleaning the streets to flood control."

A project to untangle the area&#8217;s electrical wires illustrates how they help both the Iraqis and the Americans. Rats&#8217; nests of electrical wires crisscross Sadr City, like most of Iraq, as residents wire their homes to dozens of generators across the district.

The wires hang well below normal power lines. The towering American vehicles often tear down the lines while driving down the streets, and soldiers are sometimes given electrical shocks.

The groups had some hiccups at first, and the Americans had to monitor them closely to make sure they earned their paychecks, but they&#8217;ve come on strong in the past few months, Eifler said. Streets that were once strewn with trash are now relatively trash free, although the area still needs major essential services beyond the scope of the program.

The workers are a flexible source of labor that can be rapidly assigned to a pressing need, Maj. John Gossart, the executive officer for 3rd Brigade Combat Team, 4th Infantry Division.

Said Gossart: "This is a tool jointly used by us in coordination with the government of Iraq."

The workers still provide information to American units, but it&#8217;s a minor part of their job compared to what it is for the "Sons of Iraq." Salim Malah al-Saadi, a supervisor who manages 50 workers, sets aside 10 men for intelligence work &#8212; walking around the streets and looking for suspicious people and roadside bombs. The rest spend five hours a day working on various projects.

The workers most similar to "Sons of Iraq" are those who guard electricity generators, but even they aren&#8217;t allowed to carry weapons. Kareem Abbas does a two- or three-hour shift every day, making sure no one damages the generator. Yet he and other guards also help keep the community looking good.

"My street right now is clean," Abbas bragged. "It&#8217;s very nice in the neighborhood because I know everything in my area."