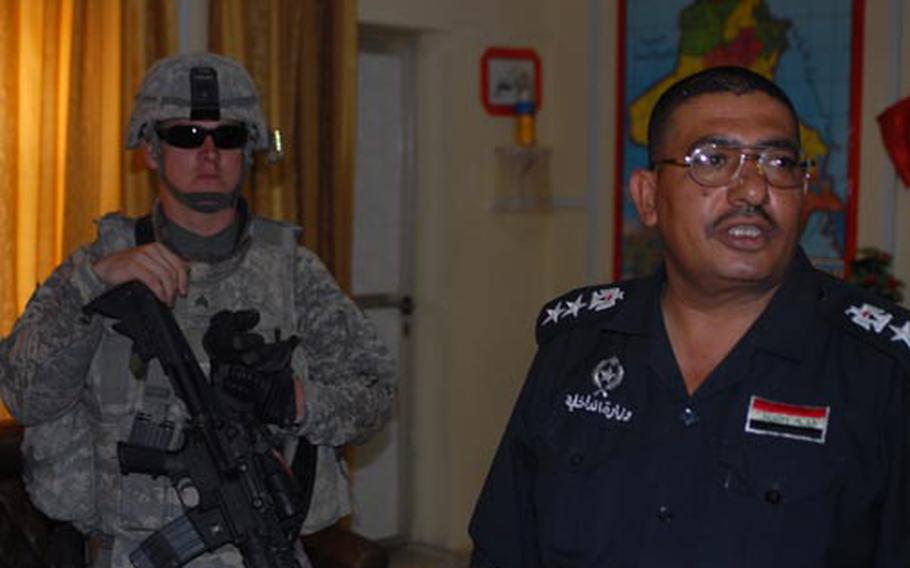 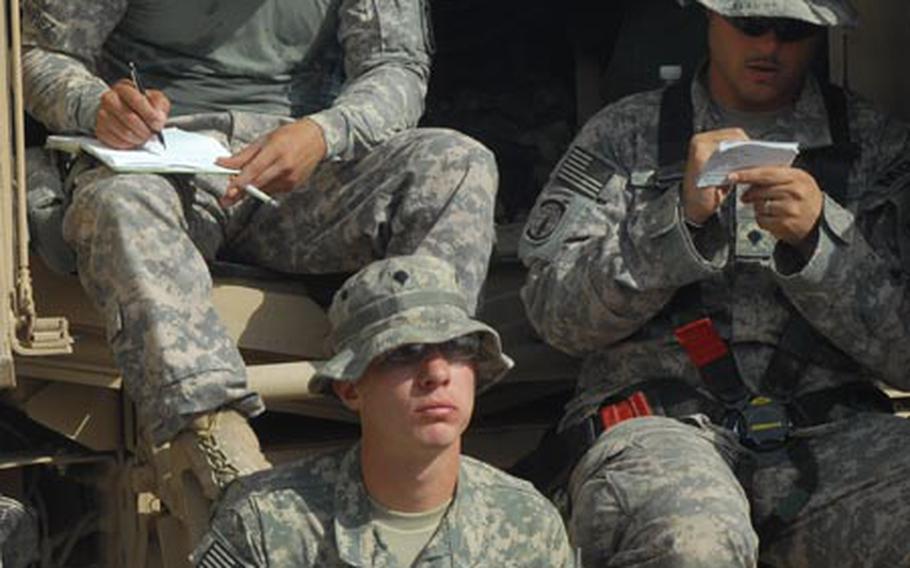 ISKANDARIYAH, Iraq &#8212; As U.S. forces prepare to leave Iraq&#8217;s cities, soldiers south of Baghdad are focused on training Iraqi police, rather than the Iraqi army, to take over security.

Maj. Erik Krivda, operations officer for the 172nd Infantry Brigade, said this week that, with the Iraqi army already well-trained and changing its focus to external threats, police training has become the primary mission for his forces. "Our first focus is the police, then the border agencies and lastly the Iraqi army," he said in an interview at Forward Operating Base Kalsu, where the brigade headquarters is based in Babil province.

Krivda said that in seven months working in four Iraqi provinces, the 172nd has detained only two suspected insurgents &#8212; whom soldiers saw emplacing a roadside bomb. He added that U.S. forces only detain people if they observe them engaged in terrorist activity or if they have a warrant from the Iraqi courts. Treating the battle against terrorism in Iraq as a criminal matter rather than as a war is in line with the Obama administration&#8217;s approach to the Global War on Terrorism, which has led to increased efforts to channel alleged terrorists through the criminal justice system.

"Kicking in doors and seizing guys &#8230; we don&#8217;t do that anymore," Krivda said. "If there are bad guys, the [Iraqi army] or [Iraqi police] will have warrants and arrest them. If they need [unmanned aerial vehicles] or air support, we will provide that. They will do the raid and seize the guy and he goes through the Iraqi court system."

The contrast from a few years ago is startling, he said.

"The legal system is working and the police and the courts are handling it," Krivda said.

A massive effort to train and equip the Iraqi army has paid dividends. The Iraqi army in the 172nd&#8217;s area of operations is self-sufficient with its own instructors and training programs, Krivda said. "The [Iraqi army] runs itself these days," he said.

The brigade&#8217;s focus is on the thousands of Iraqi police in its area of operations, which encompasses a large swath of rural land as well as cities such as Karbala and Najaf, he said.

Dozens of "international police advisers" &#8212; mostly retired U.S. police officers &#8212; work with the brigade advising the Iraqis on criminal investigation techniques, he said. A sharp drop in terrorism means the Americans are trying to get Iraqi police to concentrate on conventional crime alongside security.

For example, in Karbala, where a new police academy will soon open, police are concerned about skyrocketing drug use by young Iraqis. Drugs popular in the West, such as ecstasy, are a big problem, he said.

Military police attached to the brigade visit police stations and provide U.S. training for the Iraqis, he said.

On Monday, 2nd Platoon, 563rd Military Police Company patrolled from FOB Kalsu to the nearest Iraqi Highway Patrol headquarters. The police at the station are responsible for securing a 100-kilometer-long stretch of the main highway that links Baghdad to Basra.

The patrol leader, 2nd Lt. Andrew Ginther, soon found himself sipping tea with the Iraqis in an air-conditioned office, where a television showed buxom Iraqi women playing bagpipes and tambourines.

Ginther said the Iraqis were already doing American training when his unit arrived five months ago. "We are in the third phase of the training," he said. "It is specific training that they need for their area of operations. We have been focused on [improvised explosive device] defeat training."

Ginther said the MPs are helping the Iraqi police in nearby cities develop a crime scene investigation program, using techniques such as fingerprinting to convict criminals.

Another MP, Sgt. Chris Dowling, said he&#8217;s noticed a big drop in violence since past deployments.

"On the last deployment we were getting shot at or blown up every day," he said. "In five months we have been here, there hasn&#8217;t been a single escalation-of-force incident involving our platoon."

Despite the decreased threat, the Iraqi Highway Patrol is still focused on counterterrorism, Dowling said. "Security is definitely better, but it is not to the point where they can sustain a regular highway patrol as we would in the States," he said.

And there&#8217;s a concern that insurgents might ramp up activity this month in an effort to claim that they are forcing the U.S. to pull troops from cities.

The local Highway Patrol chief, Col. Ghassan Hashem Muhammad, who oversees 230 Iraqi highway patrolmen, said there were 20 bombs on the highway each day when he became chief three years ago.

Insurgents would put real or fake bombs on the highway to force traffic onto side roads, where they would set up fake checkpoints and kidnap travelers, he said.

Only two bombs were reported last month, and this month there haven&#8217;t been any, he said.

The Highway Patrol&#8217;s main job is to protect VIP convoys.

The police also man checkpoints, protect security force convoys and deal with crime or accidents on the road involving Iraqi citizens, he said. However, Muhammad warned that he believes Iraqi forces are not strong enough to keep peace on their own and asked that coalition forces stay in Iraq another 3 years.