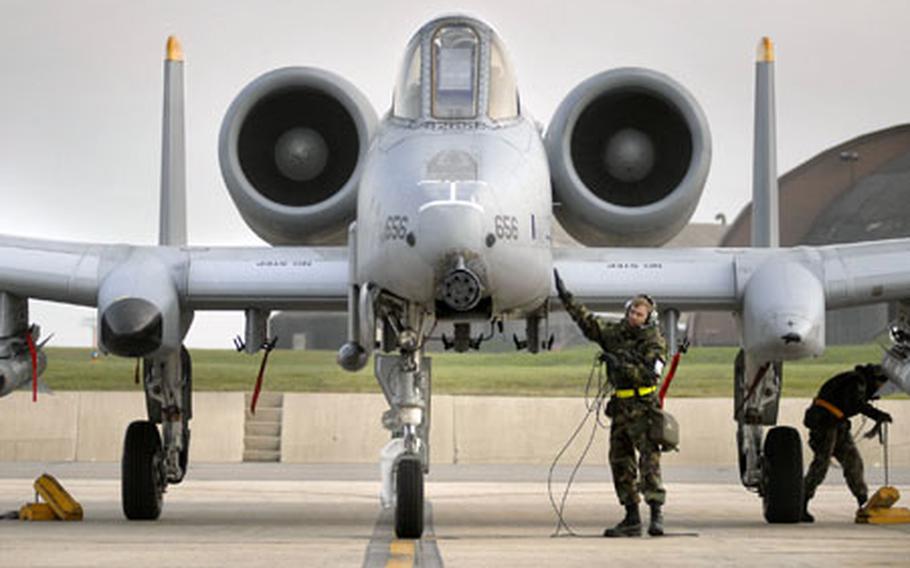 Crew chiefs remove chalks and a communication cord before launching a Spangdahlem A-10 Thunderbolt II for a local training mission last November. Investigators have determined that a Spangdahlem-based A-10 Thunderbolt pilot committed a "perception error” when he accidentally killed a Canadian soldier during a strafing run last September in Afghanistan. (Ben Bloker / S&S file photo)

KAISERSLAUTERN, Germany &#8212; Investigators have determined that a Spangdahlem-based A-10 Thunderbolt pilot committed a &#8220;perceptual error&#8221; when he accidentally killed a Canadian soldier during a strafing run last September in Afghanistan.

Separate investigations by Canadian and American military officials determined the pilot on Sept. 4 mistook a garbage fire for the smoke and fire of a bomb previously dropped on target.

The pilot, whose name has not been released, unloaded 180 rounds of 30 mm high-explosive bullets at the 1st Battalion of the Royal Canadian Regiment company 20 miles west of Kandahar. Pvt. Mark Anthony Graham, a former Olympic athlete, was killed and 30 other Canadian soldiers were wounded.

The executive summary of the U.S. investigation, which was released late Monday, found that blending infrared imagery of the enemy position on his target pod display with his visual sighting contributed to the misperception.

The Canadian board of inquiry findings, posted on Friday, concluded that the pilot &#8220;lost his situational awareness&#8221; because he did not verify the target through his targeting pod and heads-up display. The board&#8217;s report called the incident &#8220;preventable&#8221; and noted that the pilot had successfully strafed the target several times that morning.

&#8220;If he had checked his targeting pod and heads-up display, he would have noticed the discrepancy between where his plane was pointed and the real target,&#8221; the board wrote. &#8220;That discrepancy should have caused him to abort that attack.&#8221;

The pilot wanted to use the residual fire and smoke from a bomb that had just been dropped, falling on target, as a reference point to make another run at the enemy position.

nThe pilot removed his night-vision goggles less than a minute before the strafing because of the changing light conditions.

nNeither the pilot nor the Canadian air controller on the ground knew that the company lit the trash fire. The soldiers had burned the garbage after packing their gear, eating breakfast and preparing for upcoming combat operations.

nInvestigators found that there were deficiencies with the pre-deployment training and equipment of the Canadian air controllers on the ground. Although the deficiencies did not cause the incident, equipment such as infrared pointers might have helped.

The public affairs office for the 52nd Fighter Wing at Spangdahlem Air Base on Tuesday deferred all questions to U.S. Central Command Air Forces.

Lt. Gen. Rod Bishop, commander of the 3rd Air Force, will decide whether to take any action against the pilot, said Maj. John Elolf, an Air Force spokesman for U.S. Central Command Air Forces at Shaw Air Force Base, S.C.