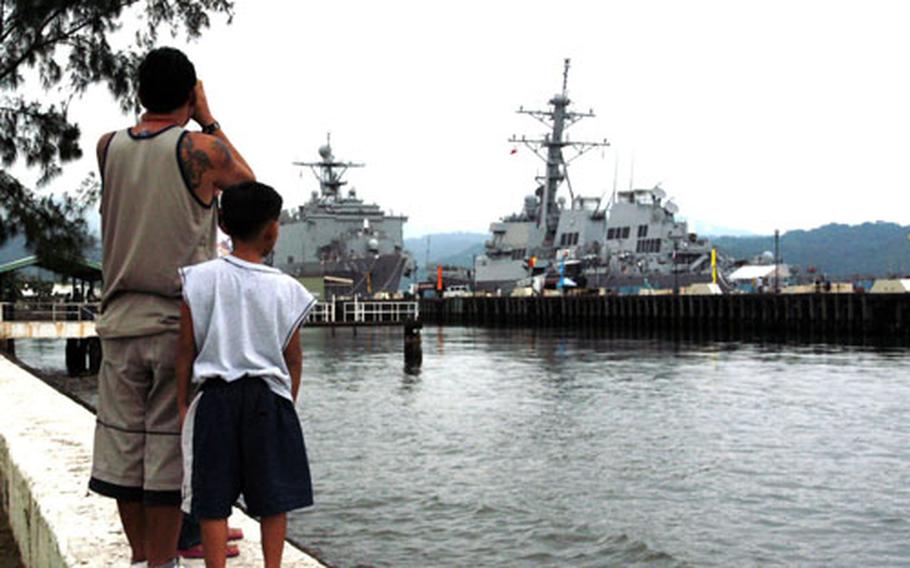 In this file photo from 2005, a Philippine family looks at two of the U.S. Navy ships that arrived this week in Subic Bay in the Philippines for the final phase of Cooperation Afloat Readiness and Training. Pictured are the Sasebo-based USS Harpers Ferry, left rear, and the USS Paul Hamilton. (Juliana Gittler/Stars and Stripes)

SUBIC BAY, Philippines &#8212; Nearly 2,000 U.S. and Philippine sailors and coast guardsmen will practice ship boarding, at-sea interdiction and other maritime security skills during the fifth and final phase of Cooperation Afloat Readiness and Training in the Philippines this month.

The exercise brings the two nations&#8217; sea services together to practice skills and procedures on land and at sea. This week, the training will focus on land training followed next week by a period at sea to test the skills developed.

&#8220;This exercise has a long history that dates back to 1995, and each time we&#8217;ve conducted CARAT, we&#8217;ve increased the complexity, and adjusted the focus toward capacity-building in response to new and emerging threats,&#8221; said Rear Adm. Kevin Quinn, commander of the task force leading CARAT, at the opening ceremony Tuesday.

During the training, Navy Seabees also will rebuild schools and medics and Army veterinarians will hold civic action programs as part of the exercise community-relations program, according to a Navy release.

CARAT is a multiphase exercise from May to August in which U.S. personnel and ships practice with the forces of several other countries in sequential phases. The exercise this year also included Singapore, Indonesia, Thailand, Malaysia and Brunei.

Five Philippine navy ships including patrol boats and gunboats will be participating, with a SEAL diving team and 200 Philippine Marines.

&#8220;All of our exercise events are designed to create as much interaction as possible,&#8221; Quinn said. &#8220;The only way two navies can operate efficiently together at sea is through a common set of procedures, and through good communications. The interface between our people is a true hallmark of CARAT and one of the most important aspects of the exercise.&#8221;